Blue Ecology is an ecological philosophy, which emerged from interweaving First Nations and Western thought. It is meant to be a companion because it augments existing Western science hydrology rather than displacing this knowledge. “Interweaving is about creating a new form of knowledge through collaboration by interweaving useful threads from each way of knowing into a more robust way,” states Michael Blackstock.

“Blue Ecology has been a two-decade long journey of discovery for Michael Blackstock, highlighted by his appointment to a UNESCO Expert Panel for a 4-year term in 2008. His work on the Expert Panel resulted in an invitation to share his Blue Ecology message at an international symposium held in October 2008 by the International Association of Hydrological Sciences (IAHS),” states Kim Stephens, Executive Director, Partnership for Water Sustainability in BC.

“This international exposure, and Michael’s inspirational impact on this gathering of senior scientists, was a watershed moment in his life. He established his credibility with the hydrology community, and this led directly to his peer-reviewed paper, published in February 2009 by the IAHS.”

“In Blue Ecology and climate change: interweaving cultural perspectives on water, an indigenous case study, Michael laid out the case for an attitude change and culture-shift related to water. In the decade-plus since, he has written and/or contributed to series of books that further explore and build on this theme.”

“While international recognition gave Blue Ecology early credibility and profile, there was limited awareness within British Columbia of what Michael Blackstock had accomplished on the global stage,” continues Kim Stephens. “Fast forward to November 2017. That is when the Partnership for Water Sustainability held the Blue Ecology Workshop to begin the process of mainstreaming Michael Blackstock’s work and ecological philosophical into the local government setting.”

“The 2017 workshop marks the start of the next leg of Michael’s journey, now in collaboration with the Partnership and NALT. This brought Michael into the orbit of the Watershed Moments team, a grass-roots initiative that has members from 10 organizations.”

“The Watershed Moments team draws on the knowledge and expertise of individuals with experience related to First Nations (Indigenous), the land and stream stewardship sector, and four layers of government – federal, provincial, regional district and municipal.”

“In 2021, the Watershed Moments team embraced the Blue Ecology idea, and committed to the vision for Water Reconciliation as an outcome. In essence, Water Reconciliation means going back to the headwaters of where we got our relationships with water and with one another wrong; and then starting back down the river of time – this time together – with a full understanding of the importance of embracing a water-first approach to planning human interventions in the environment.”

“In early October, for example, BC Hydro’s Power Smart for School program went live with a Blue Ecology module for Grade 11 students. This will help them learn how they might better care for water.” 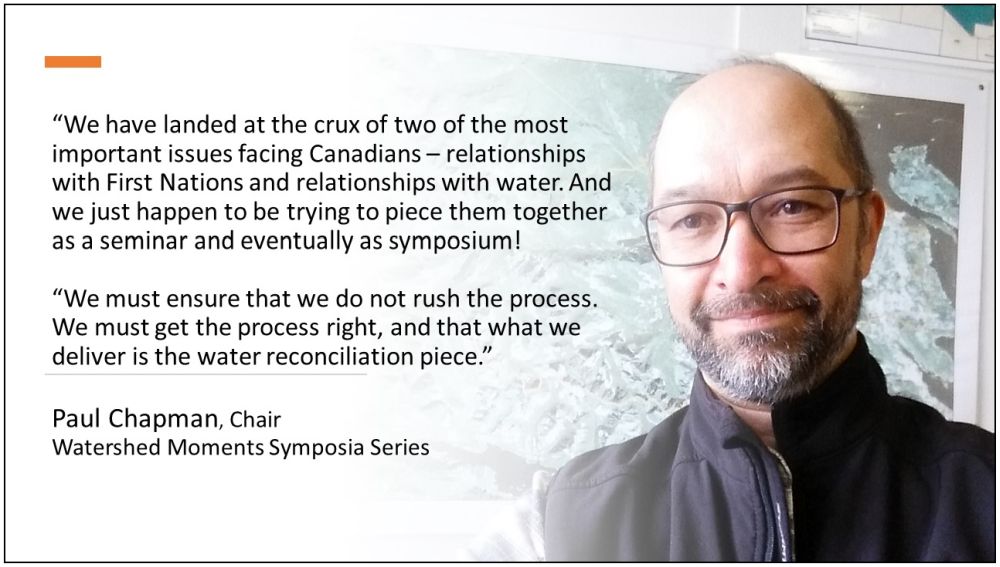 “Michael is joined by Linda Brooymans, Steph Cottell and Christina (Tina) Willard-Stepan. Blue Ecology, the interweaving of Indigenous and Western water stewardship knowledge is the over-arching theme for the event.”

“The District of North Vancouver’s Richard Boase returns as Moderator. He has an innate ability to ask the questions that get to the heart of the matter, shares his enthusiasm with panelists and audience alike.”

“An interesting dimension shared by all four initiatives is that the educational content is coming from outside the public school system. Environmental not-for-profit groups and regional districts are bringing water stewardship lessons to the classroom, connecting schools to their watersheds,” continued Paul Chapman.

“In the Nanaimo and Cowichan regions, stewardship groups are providing nature-based programs for elementary and high schools, respectively. In the Comox Valley, it is the regional local government that is leading the watershed education initiative.”

“How do these initiatives fit within the Blue Ecology framework? Join the conversation on November 18th.”

About the Watershed Moments Series

“The Watershed Moments Series is a building blocks process. Each event builds on the last and points the way to the next,” reports Richard Boase, Series Moderator. “To date, the symposium format has provided a neutral forum for local elected representatives, local government staff, stewardship groups and others to ‘convene for action’ with the objective of growing the restorative footprint where we live.

“Symposia programs are built around success stories – inspirational in nature, local in scale, and precedent-setting in scope and outcome. In short, these precedents can be replicated and/or adapted in other communities.”

Click on the image below and download a copy of the Program Brochure for the Blue Ecology Virtual Seminar.

TO REGISTER: Go to https://www.civicinfo.bc.ca/event/2021/Blue-Ecology-Seminar.