FLASHBACK TO 2008: At the finale seminar in the Comox Valley Learning Lunch Series, participants explored a regional team approach in the context of a joint study by the Town of Comox and City of Courtenay to determine the source of flooding problems and identify drainage improvements in the inter-municipal Brooklyn Creek

Released in June 2008, Living Water Smart is the provincial government’s vision and plan to keep British Columbia’s water healthy and secure for the future. An over-arching goal is to encourage land and water managers and users to do business differently.

In June 2008, Comox Valley local governments embraced an invitation to be a demonstration region for a regional team approach to collaboration. As part of the Living Water Smart roll-out, seminar programs were implemented in both the Comox Valley and the Cowichan Valley. Download a copy of the The Story of the 2008 Vancouver Island Learning Lunch Seminar Series, 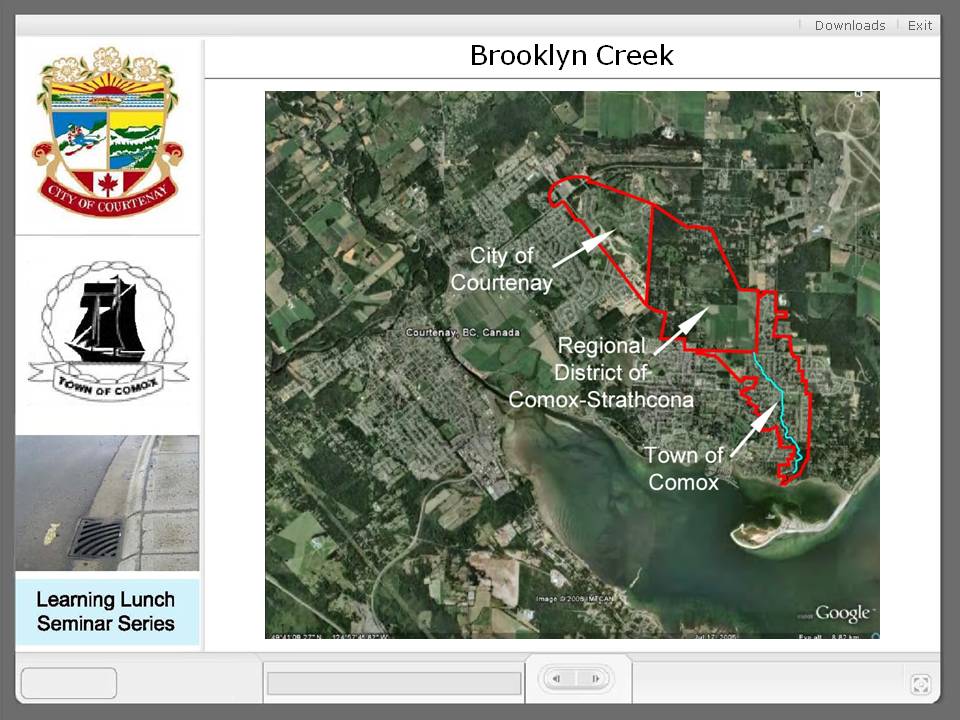 The Water Sustainability Action Plan comprises inter-connected program elements that give local governments and practitioners the tools and experience to better manage land and water resources.

At Seminar #3 in November 2008, participants explored a regional team approach that would ensure consistency in doing business differently to achieve a shared vision, namely: Create Liveable Communities and Protect Stream Health. The seminar theme was Nature Knows No Boundaries.

The Learning Lunch Seminar Series was the first step in building a regional team approach so that there would be a common understanding and consistent messaging regarding on-the-ground expectations for rainwater management and green infrastructure.

The Learning Lunch Seminar Series was part of the implementation program for  Beyond the Guidebook: The New Business As Usual, and was precedent-setting in its scope.

Beyond the Guidebook builds on the foundation provided by Stormwater Planning: A Guidebook for British Columbia, published in 2002, and incorporates lessons learned over the past two decades in moving from planning to action.

High-level endorsement for a ‘regional team approach’ was provided when Mayors and Chief Administrative Officers representing the four Comox Valley local governments dropped in to show their support for the Learning Lunch Seminar Series. Click on the link below to view a YouTube video of Sandy Gray, City of Courtenay CAO, speaking on behalf of the four governments.

Sandy Gray lauded the objectives of the Learning Lunch Seminar Series. “We are thrilled by the work of CAVI. It is a tremendous initiative,” he said. “The cooperation that is taking place around a consistent approach to development is very critical to all of Vancouver Island.”

To underscore the Nature Knows No Boundaries theme for Seminar #3, the City of Courtenay and the Town of Comox made a joint presentation about Brooklyn Creek. In 1999, this established a precedent for a cooperative / team approach to addressing drainage concerns in an area that is not confined to one municipality.

Brooklyn Creek lies in East Courtenay, North Comox and part of the Comox Valley Regional District. Derek Richmond (Manager of Engineering, City of Courtenay) and Glenn Westendorp (Superintendent of Public Works, Town of Comox) tag-teamed to tell the story of Brooklyn Creek. To view a 5-minute video clip of Derek and Glen on YouTube, click on the image below.

Why was the study done?

In setting the scene, Derek Richmond stated that the joint study was done to determine the source of flooding problems and identify drainage improvements to help alleviate flooding and channel erosion impacts. “There was uncertainty as to the source of the problems,” noted Derek Richmond. “It was assumed that development at the headwaters was the primary cause.”

He explained that two major developments are located in the Brooklyn Creek headwaters: Home Depot, and the Crown Isle residential and golf course community. The latter incorporates detention facilities as part of the golf course facilities. These ponds restrict flows leaving the site.

“Suffice to say, the Brooklyn Creek case study is characterized by the ongoing theme of boundaries, working with and around boundaries, and figuring out how we can cooperatively get things done,” observed Derek Richmond. 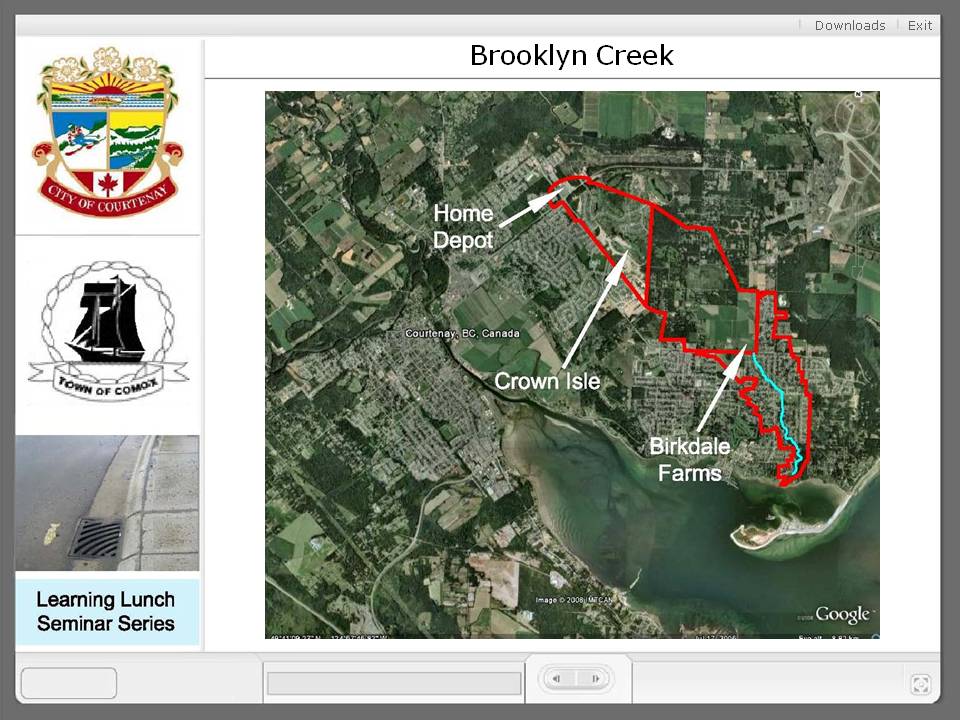 What were the findings and solutions?

“Flooding was caused by undersized culverts and poor grading,” explained Glen Westendorp. “Traditional engineering solutions would have resulted in a linear total loss of habitat, would have significantly impacted on private property, and the costs were well beyond the the financial capacity of the Town.”

“Instead, a course of action involving a suite of solutions was chosen. First and most important was a commitment by all jurisdictions to hold the line,” continued Glenn Westendorp. “Future developments are required to retain existing flow rates and use every opportunity to implement source controls.”

Glen Westendorp elaborated on how implementation of a suite of solutions has significantly decreased flooding in the Birkdale Farms area, and water quality has improved.

According to Derek Richmond and Glen Westendorp, the lessons learned and the experience gained from the inter-municipal Brooklyn Creek process underscored the importance of:

Download a copy of the PowerPoint slides that accompanied the co-presentation by Derek Richmond and Derek Richmond, and titled Nature Knows No Boundaries – Making Green Choices: Brooklyn Creek Case Study