A ‘ONCE IN A GENERATION’ WINDOW OF OPPORTUNITY: “The International Year of the Salmon program has the potential to be a game-changer. It is not just about the fish; it is about humankind creating sustainable landscapes for people and salmon,” say Kim Hyatt and Peter Tschaplinski, the federal-provincial science duo who will inform, educate and engage participants in the finale module of “Watershed Moments, the Video Trilogy Series” (December 3, 2020 at 10:00 AM on YouTube)

The Registration Fee for the series is a nominal amount –
$30 for stewardship groups and $50 for all others! 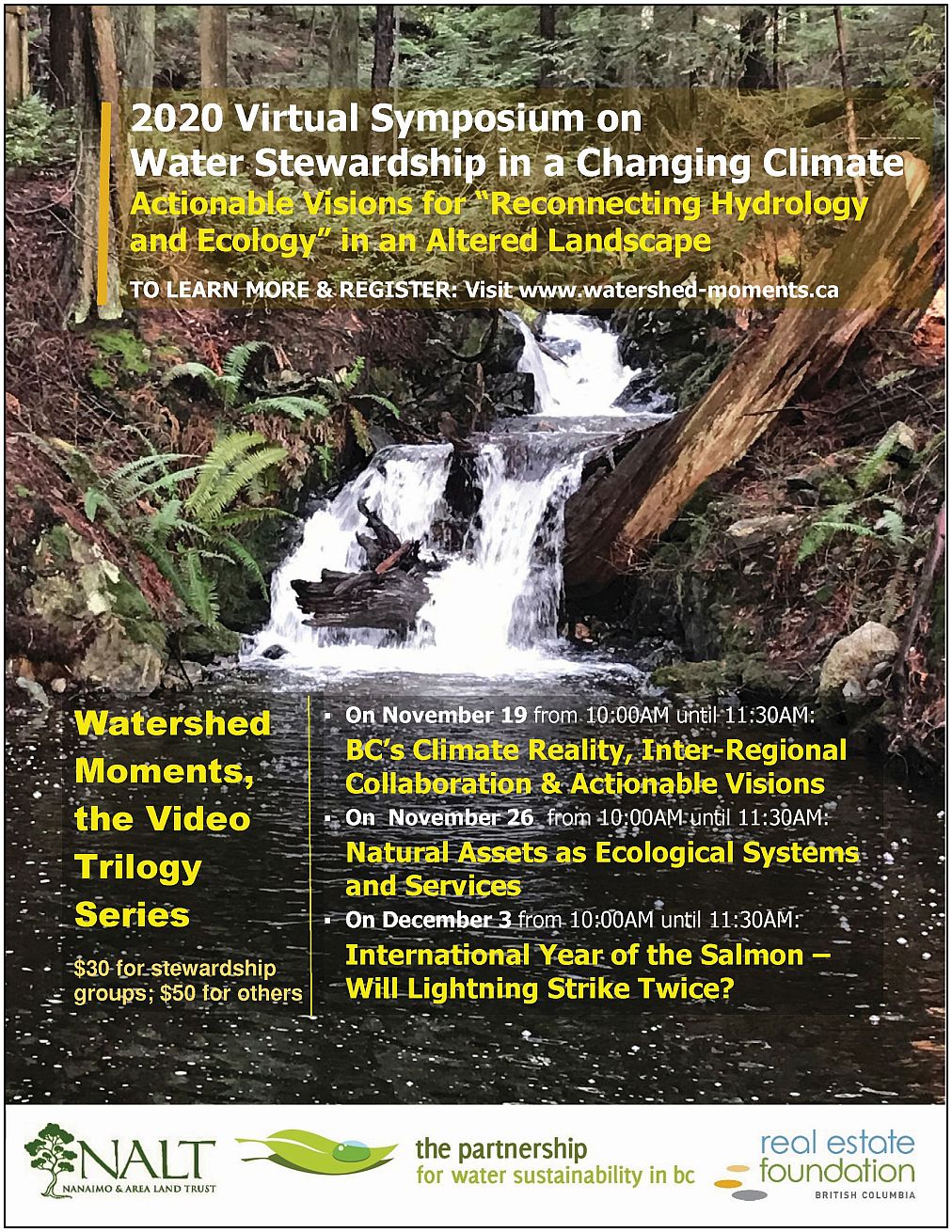 In the third and final module in the Video Trilogy Series, the federal-provincial science duo of Dr. Kim Hyatt and Dr. Peter Tschaplinski will inform, educate and engage participants. They embody a wealth of fisheries-related knowledge. The experience of this engaging duo dates back to the 1970s. Thus, they do know of what they speak!

They are teaming to provide a balance of strategic and regulatory perspectives on how communities can apply the lessons learned over four decades, reconnect hydrology and ecology, stitch together altered landscapes, and grow the restorative footprint.

The video is the springboard to Symposium 2021 – which  will be the fourth in the Vancouver Island Water Stewardship in a Changing Climate Symposia Series. A key message is that past practices have left a legacy of impacts that still exist on the land base, some of which are getting worse rather than “recovering”.

Stitching together altered landscapes requires connecting people to landscapes, with salmon being a rallying cry for action. The International Year of the Salmon is a way to focus attention on this outcome: Improve Where We Live.

International Year of the Salmon – Will Lightning Strike Twice?

In British Columbia, the iconic salmon is the canary in the coal mine. The multi-year program that is the International Year of the Salmon (IYS) could be a ‘carpe diem moment’ (i.e. seize the day) for communities. Why is that so, the reader may well ask? The answer is that IYS has grown into an effort to ensure the resilience of both salmon and people, especially now that the global rhythms of water are in flux due to a changing climate.

For the first time in decades, the stars are in alignment. IYS is an international program to which our federal and provincial governments have committed both money and time. Thus, lightning could strike twice and launch a second era of science-based action. With IYS as a guiding vision, communities could build on what some have known since the 1980s and, in so doing, offset the neglect of past decades. The common denominator between now and then is a ‘salmon crisis’, only this time accentuated by a climate emergency.

IYS is the opportunity to follow through with an effective response this time, and truly reconnect hydrology and ecology. Success depends on application of science-based understanding (what we know) harnessed to political will (to make it happen). But the driver for reconnecting people to the landscape, and implementing actionable visions, requires bottom-up actions to create and sustain political will.

A relevant and highly successful precedent for the ‘top-down & bottom-up approach’ is the Urban Salmon Habitat Program (USHP) which mobilized communities in the 1990s. The success of USHP was, in large part, due to the collaboration of the federal, provincial and local governments, working in partnership with the stewardship sector.

Improve Where We Live: Convening for Action on Vancouver Island

The focus is on salmon, people and the landscape. Looking through the ‘salmon lens’ connects to key themes for a restorative development approach to stitching together altered landscapes for the benefit of people and salmon.

Looking through the salmon lens reminds us of the critical requirement for reconnection between federal and provincial government agencies to collaborate in undertaking a challenging mission for which they share authority.

From an International Year of the Salmon perspective, large efforts of a very large mass of people around the rims of the North Atlantic, North Pacific and likely Arctic oceans will need to ‘come together’ for any real change to occur. From this perspective the requirement in an increasingly interconnected world is closer to ‘humankind’ than to a few of us in the local community. That said, it’s the sum of us in local communities that will move this closer to a humankind undertaking,” states Kim Hyatt.

“Significant initiatives and projects directly relevant to sustaining and enhancing wild salmon and their freshwater habitats are under way such as the federal-provincial BC Salmon Innovation and Restoration Fund. The Ministry of Environment and Climate Change Strategy together with other provincial natural resource ministries are key players,” adds Peter Tschaplinski.

Building on What We Know

Did you (the reader) know that the ‘salmon crisis’ of the 1990s galvanized federal-provincial action, cross-border collaboration, and pioneer research under the umbrella of the Georgia Basin Action Plan, which was an evolution of the earlier Georgia Basin Ecosystem Initiative?

Do you believe that history does repeat itself, and that there are ‘once in a generation’ windows of opportunity to seize the moment, and have a lasting impact for the better?

Before you read this article, were you aware that the multi-year program for the International Year of the Salmon, launched in 2018, represents a ‘once in a generation’ moment?

Does it surprise you and give you hope that the International Year of the Salmon shows renewed interest and commitment, and timely re-engagement, by senior governments?

Will lightning strike twice and inspire a new generation of researchers, managers, community leaders and conservationists to take the baton and collaborate – within the three levels of government, and between governments and the stewardship sector – along the lines of the former Urban Salmon Habitat Program?

“The International Year of the Salmon program has the potential to be a game-changer. It is not just about the fish; it is about humankind creating sustainable landscapes for people and salmon,” say Kim Hyatt and Peter Tschaplinski.

These are the four theme areas for educating Watershed Moments participants in order to inform the conversation about stitching together altered landscapes.