DOWNLOAD A COPY: “Story of the Bowker Creek Forum” – a compendium of six articles provide insight as to why the Bowker Creek Blueprint and 100-Year Action Plan for restoration of natural function in an urban watershed is precedent-setting and unique; and how it demonstrates the power of collaboration between the local government and stewardship sectors in BC’s Capital Region (February 2010)

Located in the urbanized heartland of the Capital Regional District, the Bowker Creek watershed is shared by the City of Victoria, City of Oak Bay, and District of Saanich.

After years of dedication and hard work, the BCI completed a comprehensive and detailed plan for implementing the community vision for watershed restoration, reach by reach. The plan is called Bowker Creek Blueprint: A 100-Year Action Plan to Restore the Watershed.

In February 2010, an inter-regional event – branded as the Bowker Creek Forum – showcased and celebrated the Bowker Creek Blueprint. It was a coming out moment. In terms of Bowker history, this was actually the second forum, as the first was almost a decade earlier in 2002. Within two years, the 2002 Forum led to the formal establishment of the Bowker Creek Initiative.

Below is an introduction to a document titled the Story of the Bowker Creek Forum. It consolidates a set of six articles posted on the waterbucket.ca website during the period January through March 2010.

“Under the umbrella of the Water Sustainability Action Plan, and beginning in 2007, the CAVI-Convening for Action on Vancouver Island program brought together engineers and planners in local government around water sustainability. One of the key outcomes of the CAVI initiative was relationship-building within, and between, the four populous Island regional districts: Capital, Cowichan Valley, Nanaimo, and Comox Valley,” stated Kim Stephens, Executive Director, Partnership for Water Sustainability in British Columbia.

“While the context of the Bowker Creek Forum was Georgia Basin, the spotlight shone most brightly on the Bowker Creek Blueprint, which had been several years in the making. The Georgia Basin comprises the lands on the east coast of Vancouver Island, and the Lower Mainland, that drain into the Salish Sea.

“Beginning in 2012, the CAVI program morphed into the Georgia Basin Inter-Regional Educational Initiative (IREI) when the four Vancouver Island regional districts, along with the Metro Vancouver Regional District, each passed a Board Resolution that formalized their collaboration under the IREI umbrella.” 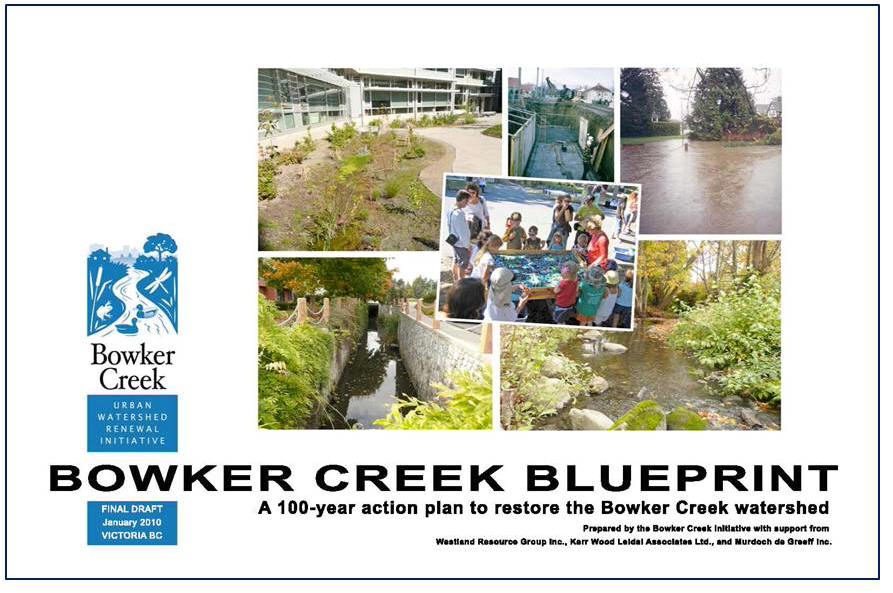 Story of the Bowker Creek Blueprint

“Leading up to the Bowker Creek Forum, we released a set of four stories. These progressively foreshadowed and/or elaborated on the core content for the Forum. A fifth story documented the Forum outcomes,” continued Kim Stephens.

“People learn from stories. For this reason, I conducted a series of interviews with a range of players representing a continuum of perspectives. The common denominator was their shared commitment to restoring the health of the Bowker Creek watershed. During these interviews, which were conversational in nature, I learned about their individual Ah-Ha Moments which provided insight into what motivated everyone to work together for the common good.

“The Bowker Creek Forum then created an opportunity for a larger audience to learn about urban watershed management successes and challenges from the Bowker Creek Initiative.”

The Bower Creek Blueprint had its genesis in the Bowker Creek Watershed Management Plan. It was developed in 2002 by a Forum of government agencies, community organizations and residents, in order to recognize and protect valued characteristics of the watershed. Public input was sought and the final Plan reflected the views of the Forum and members of the public.

In 2003, the municipalities of Saanich, Oak Bay and Victoria, and the CRD Board approved the Bowker Creek Watershed Management Plan. The BCI was then established and a coordinator hired in 2004. The Plan guided all activities undertaken by the BCI.

Chapters in the Story

CONVENING FOR ACTION IN THE GEORGIA BASIN: Bowker Creek Forum promoted inter-regional sharing and collaboration. Story #2 introduced the vision for collaboration among the three regions (CRD, north of the Malahat, Metro Vancouver); and described the ‘regional team approach’ to achieving water sustainability through implementation of green infrastructure.

SHARED RESPONSIBILITY: Community Perspectives on Developing and Implementing the 100-Year Action Plan for Watershed Restoration. Story #3 described the role played by community groups and associations; and explained how community values influenced the plan development process and are reflected in the Bowker Creek Blueprint.

SHARED RESPONSIBILITY: Local Government Perspectives on Developing and Implementing the 100-Year Action Plan for Watershed Restoration. Story #4 elaborated on what on-the-ground implementation means for municipal staffs which are tasked with making things happen.

CALL TO ACTION: Bowker Creek Forum advances a ‘regional team approach’ in the Georgia Basin. Story #5 summarized what was accomplished by the Forum, and foreshadowed where implementation of a new culture for watershed restoration may lead.

Desired Outcomes for the Forum

“A desired outcome in holding the Bowker Creek Forum was to share information about successful approaches, so that they could be replicated in other jurisdictions,” stated Tanis Gower, (a former) Coordinator for the Bowker Creek Initiative (BCI), in 2010. She has since relocated to the Comox Valley.

“In addition, this forum was a chance for regional organizations, businesses and community members to learn more about and celebrate the accomplishments of the Bowker Creek Initiative.”

To read the set of six stories, download a copy of the Story of the Bowker Creek Forum. These stories served as resource materials for participants; and have a legacy value as a publicly accessible record of the Forum process.