The purpose of this article is to paint a broad-brush picture of how the Bowker Creek Forum program was structured. The Agenda for the day is presented below and comprised two parts: Bowker-centric and inter-regional. The Bowker part of the program was structured in three segments (or modules): Development, Actions and Implementation. The inter-regional part of the program had two segments (modules).

An Overview of the Forum Program

“Over a long period of time, the Bowker Creek Initiative (BCI) has demonstrated how to apply a ‘regional team approach’ to urban watershed restoration in the Georgia Basin. The players driving the BCI have brought their shared vision to fruition through development of the Bowker Creek Blueprint,” stated Kim Stephens, Executive Director, Partnership for Water Sustainability in British Columbia. In 2010, he was co-organizer of the Bowker Creek Forum, and was the moderator for the inter-regional part of the program. Jody Watson was the moderator for the Bowker-centric part of the program.

“The Bowker Creek Forum on February 23, 2010 was a celebration of the Bowker Creek Blueprint. Because the Blueprint accomplishment is of province-wide significance, the Forum was also an opportunity for inter-regional learning.”

Held at the University of Victoria, the Bowker Creek Forum attracted a diverse audience of 60 people from around the Georgia Basin. The day was structured in three modules.

The morning program comprised two Bowker modules, both delivered by Jody Watson. She provided an in-depth account of how the Bowker Creek Blueprint and Action Plan were developed.

The afternoon program began with the third Bowker module. Representatives of the District of Saanich and City of Victoria presented their municipal perspectives on Blueprint implementation.

In the inter-regional part of the program, the first module featured the unveiling of the Topsoil Primer Set by representatives of the Green Infrastructure Partnership. The second module featured town-hall style audience interaction, and provided the audience with the opportunity to share their takeaways from the day.

“A rousing opening address by Eric Bonham set the tone for the day,” stated Kim Stephens. Eric Bonham is a founding member of CAVI, the acronym for Convening for Action on Vancouver Island, and a former Director in two provincial Ministries – Environment and Municipal Affairs.

“His inspirational ‘call to courage’ was framed around this theme: Mission Possible. Eric was passionate when he elaborated on how a ‘top down bottom up strategy’ leads to action.”

“Jody Watson, Chair of the Bowker Creek Initiative, followed Eric with an equally passionate and inspiring storytelling segment about the process that culminated in the Bowker Creek Blueprint.

“Jody was candid in describing key success factors, challenges that the BCI faced along the way, and how they navigated through rough waters to develop the Blueprint.”

“To complete the morning session, Jody Watson focused audience attention on the Bowker Blueprint, and emphasized that the document was designed to be reader-friendly.

“Jody explained the knowledge-based approach, how it was applied, and why it was successful. She first walked the audience through the watershed-wide management actions; and then through the creek corridor actions. She concluded with a review of Ten Key Actions that will generate early momentum.” 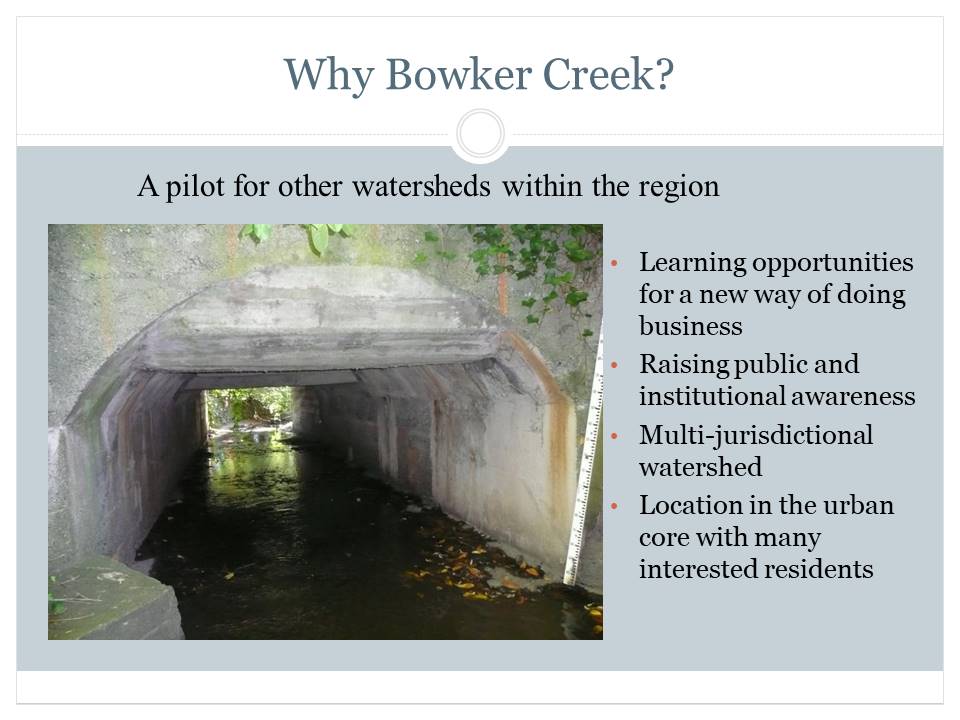 “Adriane Pollard and Anne Topp, both with the District of Saanich, opened the afternoon session. In their joint presentation, they structured their mind-map in five parts and addressed implementation issues as follows:

“Steven Fifield (City of Victoria) followed with his story of the Trent Street Rain Gardens, the City’s first of its kind. His enthusiasm shone through.”

“The team of Rémi Dubé (City of Surrey) and Susan Rutherford (Green Infrastructure Partnership) then unveiled the Topsoil Law & Policy and Technical Primer Set. These documents synthesized the pioneering experience of Surrey, the City of Courtenay and North Vancouver District.

“An absorbent topsoil layer has emerged as a fundamental building block for achieving water sustainability outcomes through implementation of green infrastructure practices.

“The Topsoil Primer Set is an important first step in developing a suite of practical ‘green’ tools that will help advance a new culture for watershed protection and landscape restoration. The Bowker Creek Forum was the venue for the provincial launch of the Topsoil Primer Set.”

“The Forum concluded with an interactive segment that ensured a high-energy finish. The spotlight was on connecting the dots between five watershed-based initiatives in five regional districts. All five are keyed to integration of water and land planning.

“This segment was built around a series of cue slides that enabled a ‘guided conversation’. In establishing context for the segment, I connected the dots to what was happening on the other side of the continent in the City of Philadelphia. The nature of the facilitated conversation was that I called upon various members of the inter-regional team, who were in the audience, to share their stories. In this way, they engaged with the audience,” concluded Kim Stephens.