Debra Oakman: Her support helped to lay the foundation for successfully launching the Georgia Basin Inter-Regional Education Initiative in 2012

In October 2017, the Partnership for Water Sustainability in British Columbia honoured Debra Oakman, retired Chief Administrative Officer of the Comox Valley Regional District (CVRD) with a Lifetime Membership in the Partnership. The presentation was made by Derek Richmond and Kim Stephens, representing the Partnership, at the start of a meeting of the CVRD Board.

In 2008 Debra Oakman became the first Chief Administrative Officer (CAO) of the CVRD when it was created as a result of splitting the Comox Strathcona Regional District into two entities.

Derek Richmond, at the podium, speaking to the CVRD Board about Debra Oakman

“An early participant in the Action Plan program, CVRD was the Partnership’s sponsor regional district when the IREI was launched in 2012. The support of the CVRD Board was secured with the assistance of Debra Oakman,” stated Kim Stephens, Partnership Executive Director.

In view of Debra’s years of commitment to promoting the vision of water sustainability on Vancouver Island, Lifetime Membership in the Partnership is our way of recognizing her very significant contribution. In the years ahead, we hope to draw upon her as a resource.

“Through her future participation in the Georgia Basin Inter-Regional Educational Initiative program, it would be wonderful if others in local government were able to benefit from her knowledge and experience.”

“Debra Oakman’s involvement with the work of the Partnership dates back to 2008 when the regional district was created in its current form,” added Derek Richmond, a Partnership Director who is resident in the Comox Valley. “Over the years, Debra has provided the Partnership with her insight and suggestions at key decision points.

“The Partnership presented Debra with a framed Lifetime Membership in order to honour her and draw attention to her high-level contribution to the success of the Action Plan in general and IREI in particular. Both are guided by the 4Cs – communicate, cooperate, coordinate, collaborate.

“Debra was always involved in water while in the Comox Valley. Whether it was through a previous initiative of the Partnership – CAVI – Convening for Action on Vancouver Island – or at inter-municipal meetings and symposiums.

“She was able to engage others and ask insightful questions and encourage interest. She has consistently provided leadership and support for water sustainability.

“Perhaps, most importantly, she was instrumental in helping to lay the foundation for the Georgia Basin IREI initiative – comprising of 5 regions within the Georgia Basin, exchanging ideas and information on water sustainability. This subsequently led to the recognition of the importance of sustainable water system delivery through asset management.

“However, this recognition goes beyond an individual to also recognize the achievements and efforts of municipalities, singularly and collectively in the Comox Valley, whose collaborative and cooperative approach to water sustainability has resulted in a number of successful initiatives,” concluded Derek Richmond.

Beyond the Guidebook 2015:
Time-Line for Comox Valley shows how “regional team approach” has evolved over past decade

Three regional strategies provide both a policy framework and a backdrop for inter-governmental collaboration in the Comox Valley:

“Adoption of the regional strategies has resulted in much for municipal staffs to absorb and digest about doing business differently, while at the same time they are tasked with keeping the wheels of government rolling to meet ongoing commitments,” Kevin Lagan, former Director of Operational Services for the City of Courtenay, stated in 2009,

“Because water sustainability is achieved through implementation of green infrastructure practices, the Comox Valley-CAVI Regional Team convenes for action around this paradigm: Water is the finite resource; however, management of development is the control.”

CLICK HERE to download a pdf copy of Figure 28 from Beyond the Guidebook 2015. This is complete with a colour-coded legend.

The Comox Valley chapter in Beyond the Guidebook 2015 is 12 pages and is organized in six sections. To download a PDF copy and read the complete story, click on Comox Valley-CAVI Regional Team. 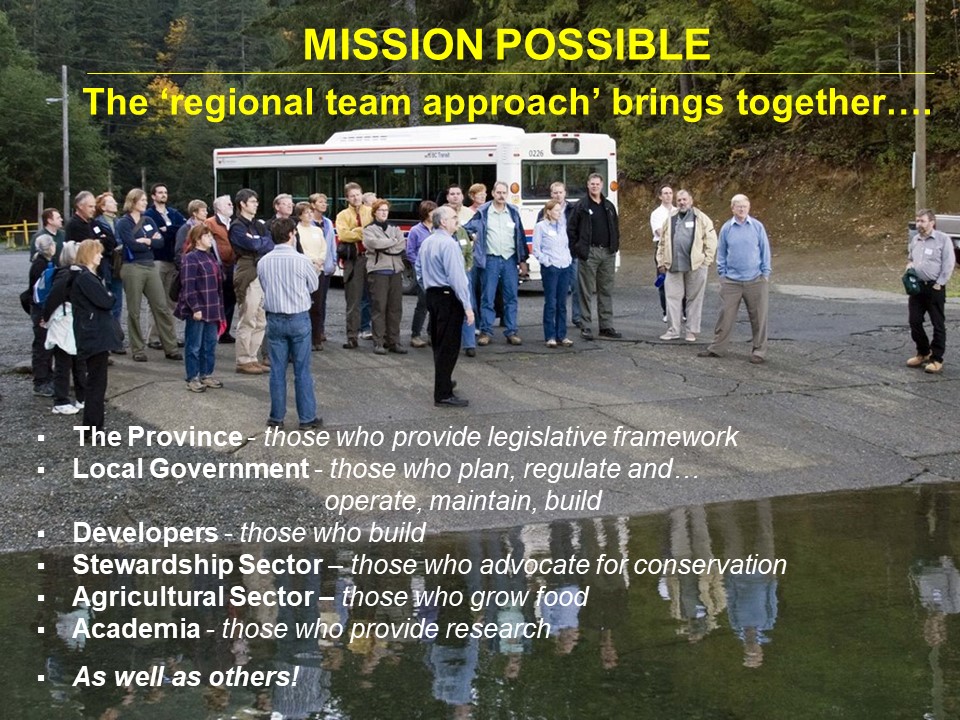