At the "Meeting of the Minds" in Parksville (Sept 2005), there was a consensus: Build a communications network to address the issues facing the water and wastewater industry within the Vancouver Island region

The CAVI-Convening for Action on Vancouver Island initiative started with two “Meeting of the Minds” consultation workshops held in Parksville (in September 2005 and then in May 2006). Both were facilitated by Kerry Elfstrom. Below is the story of the 2005 workshop.

Meeting of the Minds Workshop

The Meeting of the Minds workshop in September 2005 was held as a result of a Vancouver Island contact survey initiated by Eric Bonham (Ministry of Municipal Affairs) in his capacity as a Director of the BCWWA. The survey was undertaken during the period 2003-2004.

From individual interviews with leaders in the water and wastewater industry throughout the island, it was clear that there was widespread interest in holding a workshop that would provide an opportunity for the exchange of information, and to explore the possibility of establishing a communications network for the Vancouver Island Region.

Download Summary Report on Meeting of the Minds Workshop in September 2005 to read a synthesis of the discussion and outcomes.

“There are also similarities between the Convening for Action in the South Okanagan initiative and the Meeting of the Minds project on Vancouver Island, hence there is much to be gained through collaboration.”

To ensure that a broad range of interests were represented at the first Meeting of the Minds workshop, invitations were sent to representatives from:

In total 35 participated in the workshop at the Quality Resort Bayside in Parksville September 15 – 16, 2005.  Kerry Elfstrom, a professional facilitator, was appointed to guide the process.

At the start of the workshop, the objective for the Meeting of the Minds initiative was framed as follows:

“Build a communications network to address the issues facing the water and wastewater industry within the Vancouver Island region”.

“The group was asked to identify what issues, problems or concerns exist currently within the Vancouver Island region,” stated Kerry Elfstrom.

“It was agreed that Vancouver Island could be the focus since it has clearly defined geographical boundaries, every element of the industry represented (suppliers, operators, consultants, educators, interested Associations etc.) and advantageous proximity to the provincial Government.

“After the group identified issues that prevail in the Vancouver Island region, they were asked to identify which were the most common throughout the region.

“In a discussion about solutions at the end of the workshop, the group came to consensus that the first step to addressing these issues was to continue building and expanding the network just established (the participants of the workshop agreed that they were the network),” summarized Kerry Elfstrom.

Workshop Outcome /
Where Do We Go From Here?

“It was the consensus of those participating in the workshop that the Vancouver Island “Meeting of the Minds” exercise was a productive one and that the process should be continued,” wrote Kerry Elfstrom

“It was agreed that the group was the start of a ‘network’ for Vancouver Island and that the overall process might be replicated in other regions throughout the Province.”

In a workshop overview subsequently prepared by Eric Bonham, he observed that:

“Through discussion, participants indicated their expectations of the workshop, then identified Vancouver Island water and wastewater issues and possible solutions, which were subsequently clustered into five broad categories, namely:

“It was the  consensus of the group that the dialogue initiated at the workshop continue in the future with the goal of building an effective long-term communications network addressing issues facing both the public and the water and wastewater industry on Vancouver Island.

“As an interim step, an ad hoc committee was formed to establish future directions. Mac Fraser, Chief Administrative Officer of the Village of Cumberland, was named Chair.”

Based upon the five core areas of concern identified in Parksville, namely, Sustainability, Education, Governance, Infrastructure and Funding, the committee commenced the planning for a second one-day workshop, also held in Parksville (May 2006).

The purpose of the second workshop was to explore the five issues in more depth and to identify topics of particular concern to the water and wastewater industry on Vancouver Island; and to further the aims of establishing a Sustainability Information Exchange Network.

Meeting of the Minds 2006 led directly to CAVI-Convening for Action on Vancouver Island, launched in September 2006 at the Water in the City Conference (Victoria). 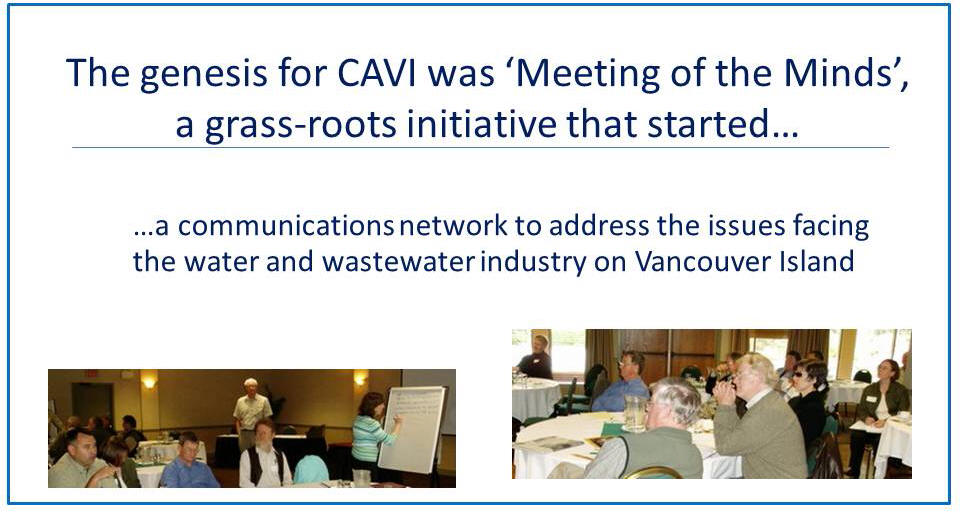