Veteran Saanich Councillor Vic Derman, who died on March 17th, is remembered as a man of principle and a staunch advocate of environmental issues and sustainability. Derman was passionate and committed to making Saanich and the entire capital region a better place.

“When I think of Vic Derman, two words come to mind: passion and commitment,” stated Saanich Mayor Richard Atwell. “Vic engaged with people in a way that made them feel important and heard. He was a passionate steward and advocate for the environment, and always worked towards making the world a better place. In that regard, Vic led by example – something for all of us to aspire to.”

“I got to know Vic well when working on the 2006 Water in The City Conference Committee which he chaired, and also through the CRD Sustainability Committee,”

recalls Eric Bonham, a founding member of the Partnership for Water Sustainability in BC. He was formerly a Director in two provincial ministries – Environment and Municipal Affairs.

“His passing is a huge loss for the District of Saanich, the Capital Regional District, Vancouver Island and, I would suggest, the province as a whole.”

“Vic was ahead of his time on so many fronts, understood the pending impacts of climate change and the need for sustainability solutions long before these issues were on the public’s radar. He was a very determined individual and you always knew where he stood on issues… his integrity was never in question. He was a challenge for some, but one never doubted his concern for the common good in the longer term. As others have noted, ‘he walked his talk’.”

“Vic, while not directly connected with the work of the Partnership, was nevertheless, aware of the organization’s purpose and, given his interest in sustainability, supportive of it. Over the years, he participated in a number of ‘sharing and learning’ events organized by the Partnership.”

The Natural City:
A Visionary Call to Action!

The Natural City is a visionary, comprehensive, and thought provoking approach to a better future for today’s residents and those who come after us.

In the Natural City, Vic Derman provided an integrative blueprint for planning ‘the natural city’. Well versed in sustainability and climate change issues, Vic offered solutions to what should be our top priorities in the planning process, and the changes we need to make in order to optimize our quality of life.

Having been involved with sustainability issues for 25 years, he had an acute and practical understanding of the necessary shift towards urban sustainability, global sustainability and ultimately the legacy that should be passed down to future generations. Topics include: Urban design, compact development, transportation, food sustainability, how to overcome the various political barriers and much more.

“Without doubt, Saanich and our region face a future where we must ‘do things differently’ to succeed. Past practices have produced a myriad of outcomes such as loss of open space, environmental degradation and choking congestion that are unsustainable and inconsistent with citizen’s hopes and expectations.” – Vic Derman, 2011. 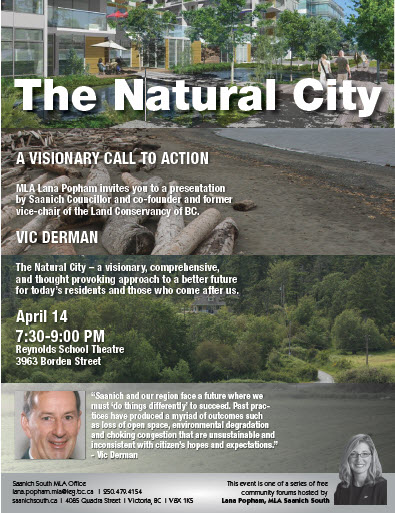