Implementation of Stormwater Utility in the City of Victoria: Moving Towards a Water-Resilient Future

In 2013, the City of Victoria embarked upon a comprehensive engagement process to implement a design with nature vision for Sustainable Rainwater Management. The City’s goal: use rain as a resource and mimic the function of natural systems. The outcome: a user-pay Stormwater Utility complete with a Rainwater Rewards Program. In October 2016, property owners received their first bill from the City for the Stormwater Utility.

To celebrate this milestone accomplishment, Kim Stephens (Executive Director, Partnership for Water Sustainability in BC) wrote an Op-Ed article for the Victoria Times Colonist newspaper. Titled Victoria’s stormwater utility looks to the future, the article was published on October 15, 2016. It is introduced below.

Rain garden gnome at work in the City of Victoria

“In the late 1990s, there was considerable interest and enthusiasm on the part of numerous BC municipalities to establish stormwater utilities. But few followed through with action, and those that did merely added to the scope of their existing sanitary

“Fast forward to 2016. The City of Victoria has shown leadership by establishing a Stormwater Utility AND a Rainwater Rewards Program that looks to the future. The City’s accomplishment merits celebration.”

Property owners in Victoria will see a new stormwater utility bill in their mailboxes this month.

Previously, all stormwater charges were included within the property tax bill and were determined by the assessed property value.

It will now transition to a user-pay system, connecting the impact a property has on the stormwater system directly to the bill.

“The ability of your property to manage stormwater has nothing to do with the assessed value of your home,” said Fraser Work, the director of engineering and public works for the City of Victoria. “It has to do with the design configuration and characteristics of your home.”

Funds collected through the bill will go directly to maintaining and upgrading the stormwater system, much in the same way separate utility bills are used to maintain the water or sanitary sewer systems, Work said.

“We are basically just making this more consistent with the way that we do utility billing and it’s a user-pay, more equitable system,” he said.

Charges will be based on each property’s characteristics, including the area of hard surfaces such as a roof and driveway, property use and length of street frontage.

The city defines stormwater as the rain that lands on hard surfaces and then flows into drains and pipes.

Property owners can introduce methods such as rain gardens, cisterns, green roofs and permeable paving to reduce their fees.

The first annual stormwater utility bill was sent out to property owners in early October 2016.

Victoria experience will inform other local governments within the Georgia Basin

Kim Stephens is a professional engineer and a ‘Water Balance champion’. He has four decades of experience and has had a leadership role in a series of provincial initiatives related to water sustainability, rainwater management and green infrastructure.

Since 2003, Kim has been responsible for developing and delivering the Water Sustainability Action Plan for BC through partnerships and collaboration. Under this umbrella is the Georgia Basin Inter-Regional Educational Initiative (IREI).

“The Capital Regional District is one of five partner regional districts, together representing 75% of BC’s population. City of Victoria experience will inform the IREI curriculum and ‘sharing and learning’ among local governments on the east coast of Vancouver Island and in the Lower Mainland,” observes Kim Stephens.

Download Victoria’s stormwater utility looks to the future to read the complete article by Kim Stephens. 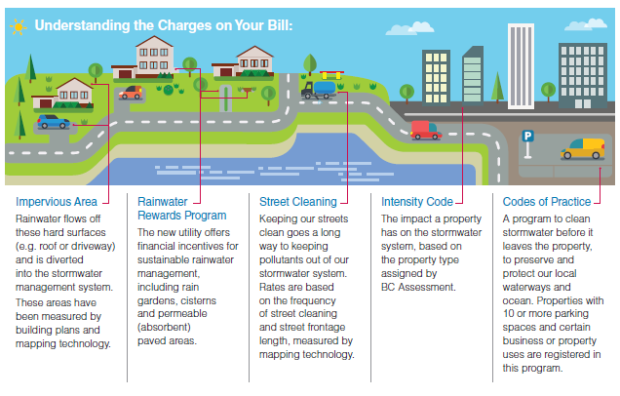