Beyond the Guidebook 2015: Concept for a 'regional team approach' had its genesis in the Cowichan experience during the early rollout of "Living Water Smart, BC's Water Plan"

The historical significance and importance of the 2007 Showcasing Innovation Series is two-fold. First, it demonstrated what could be accomplished through inter-regional collaboration, and therefore is the genesis for the Georgia Basin Inter-Regional Education Initiative (IREI), launched in 2012. Secondly, it was the catalyst for relationship-building within the Cowichan Region that then led to the precedent for a ‘regional team approach’.

In 2008, the Cowichan Region was the pilot for the Living Water Smart Learning Lunch Seminar Series. The Comox Valley Series then built on and adapted the Cowichan experience.

The Cowichan Valley chapter in Beyond the Guidebook 2015 is 14 pages and is organized in six sections. To download a PDF copy and read the complete story, click on Convening for Action in Cowichan Region. 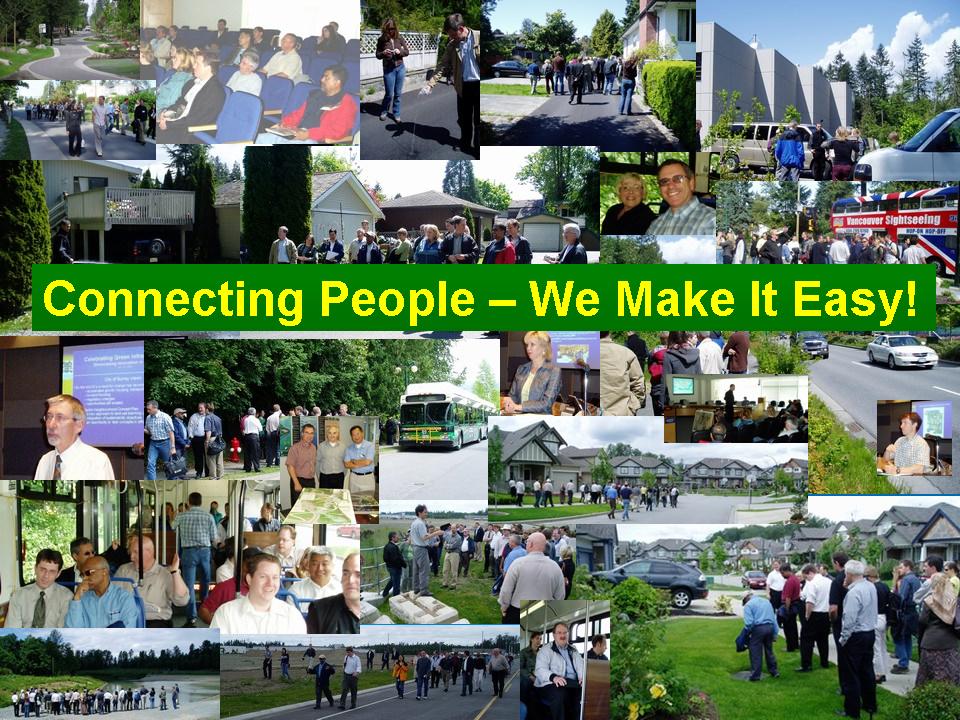 Practitioners in local government want to learn from those who are innovating, and they want to visit projects that are precedent-setting. The 2007 series enabled host local governments to tell their stories in a way that no other forum provided.

Each of the three regional districts north of the Malahat divide partnered with its largest municipal member to co-host a ‘showcasing day’. Support from the Cowichan Region was the lynch-pin that brought the showcasing concept to fruition. 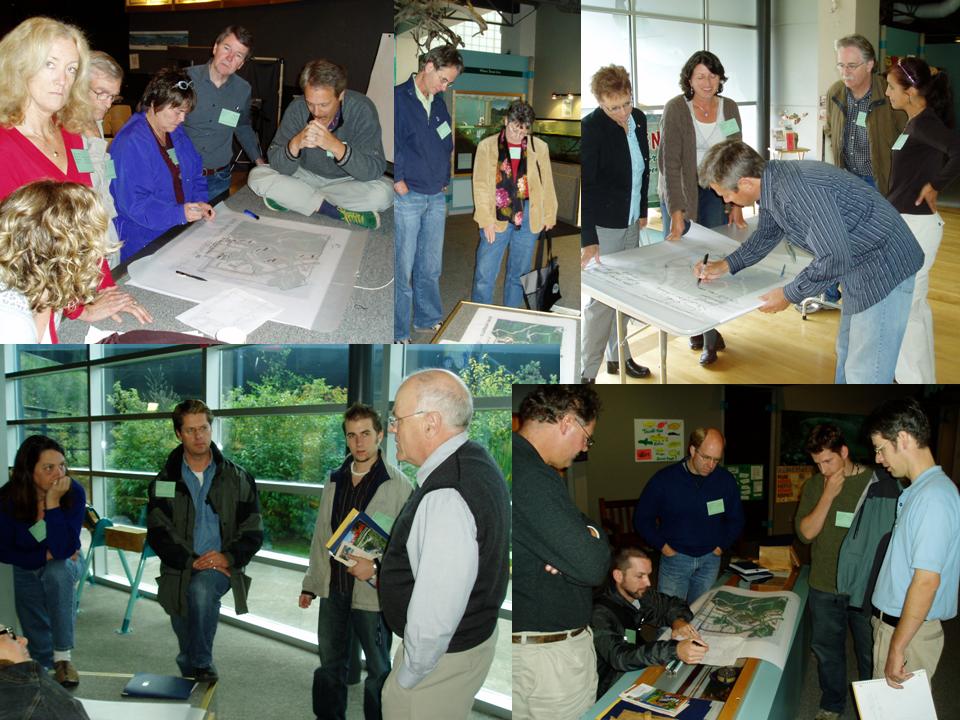 In 2007, breakout groups did a planning exercise prior to the field trip to Eco-Village

The Learning Lunch approach to aligning inter-departmental efforts within local government was an outcome of the 2007 Green Infrastructure Leadership Forum. The idea resonated and the original inter-department concept quickly expanded into an inter-governmental concept.

Release of Living Water Smart in June 2008 provided a reason for bringing together engineers, planners, building inspectors and bylaw enforcement officers. The focus was on aligning efforts to implement effective green infrastructure.

The series spread the curriculum over three sessions (scroll down). This enabled participants to take in new information, reflect on it, blend it with their own experience, test it, and eventually apply it in making decisions.

In 2008, during the planning of the series, Peter Nilsen (former Deputy Engineer, District of North Cowichan) observed that: “Within the Cowichan Valley Regional District, there are five local government jurisdictions; and the same group of developers and development consultants have projects in all or most of those jurisdictions. It therefore becomes essential that developers and their consultants hear a consistent message regarding rainwater management and green infrastructure expectations when doing business at the front counters in each of those jurisdictions.” 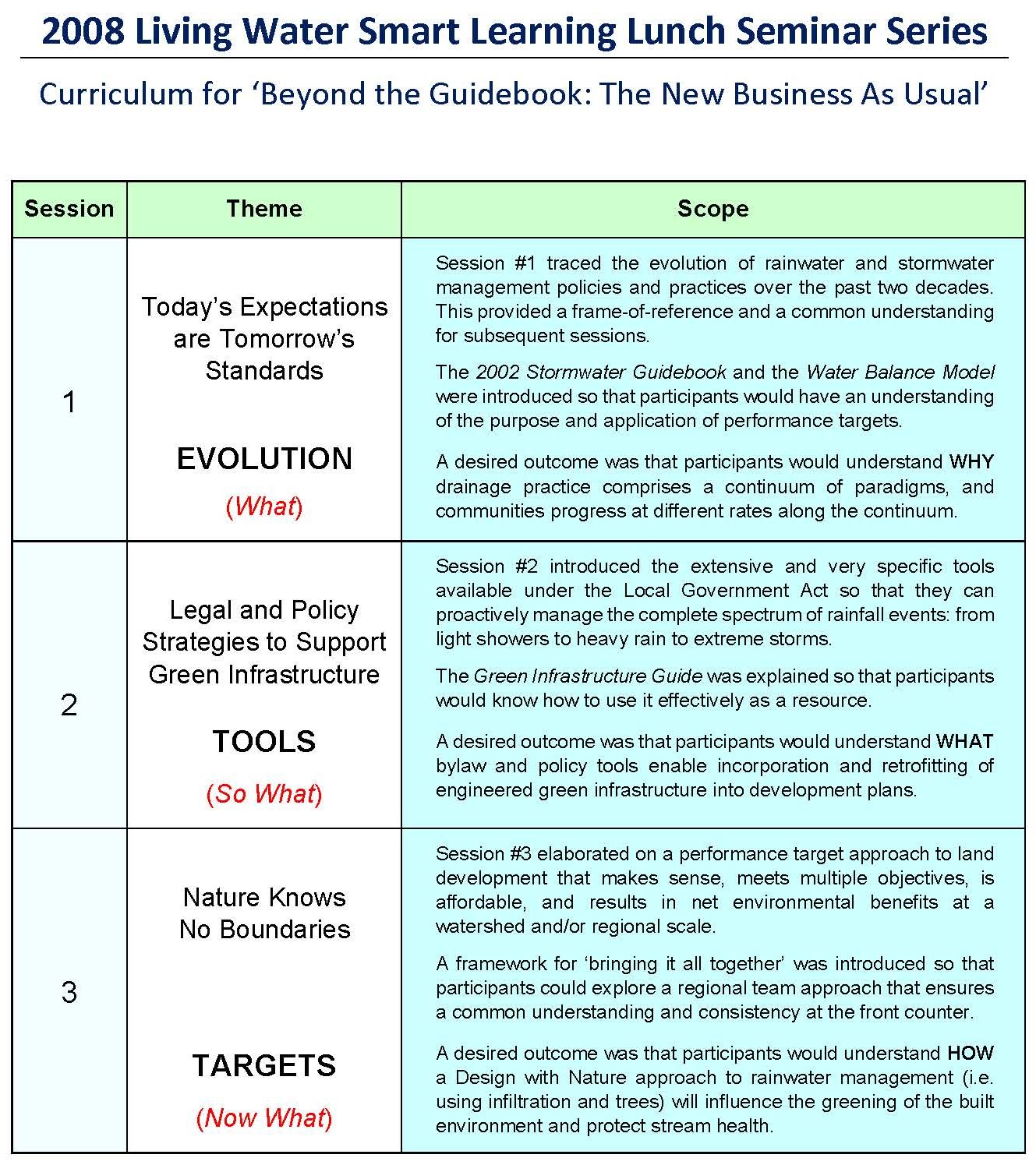