Moving Towards Healthy Watersheds: Local government champions on Vancouver Island share the proverbial wheel, rather than reinventing it

We all learn from stories and the most compelling ones are based on the experiences of those who are leading in their communities. Five regional districts representing 75% of British Columbia’s population are partners in the Georgia Basin Inter-Regional Education Initiative (IREI), launched in 2012. Local government champions on the east coast of Vancouver Island and in the Metro Vancouver region are ‘learning by doing’. They are also sharing and learning from each other through inter-regional collaboration.

Do you wonder how to visually depict Watershed Health for a public audience?

“It is so uplifting to see one’s work adapting and continuing!” stated Nancy Gothard, Environmental Planner with the City of Courtenay, when she learned that the Regional District of Nanaimo (RDN) took inspiration from Courtenay’sState of Environment report to create their own State of our Streams reports. 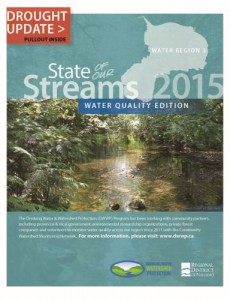 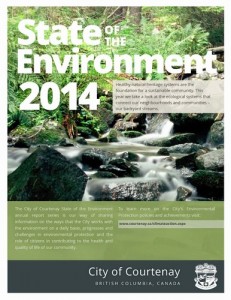 Both the City of Courtenay and the Regional District of Nanaimo (RDN) are active participants in the Inter-Regional Educational Initiative that is being stewarded by the Partnership for Water Sustainability in BC. The IREI provides opportunities for local governments on the east coast of Vancouver Island and in the Lower Mainland to share their challenges, opportunities and grounded realities in working towards watershed protection that knows no borders. 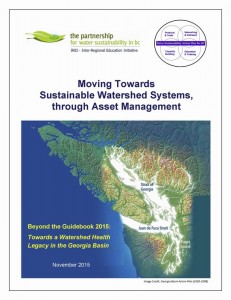 Each regional participant has a different watershed-related issue to focus on, which are each highlighted in Beyond the Guidebook 2015: Moving Towards Sustainable Watershed Systems, through Asset Management, released in November 2015.

Where commonalities exist, the IREI provides an opportunity to establish working relationships with others who can share the proverbial wheel, rather than re-inventing it. Courtenay’s State of Environment Report and RDN’s State of our Streams publications each looked to the Capital Regional District’s Bowker Creek Watershed Blueprint for initial inspiration on how to visually depict watershed health for a public audience.

Each community has different goals and capacities and each jurisdiction’s educational materials reflect this, while also providing similar messaging and layout elements for consistent branding.

“For the Bowker Creek watershed, we realized that the community, especially the youth, had no memory of Bowker Creek in a natural state because almost 70% of the creek was in pipes,” recalls Jody Watson, CRD Harbours & Watersheds Coordinator, and Chair of the Bower Creek Initiative.

“When developing the Bowker Creek Blueprint: A 100 year action plan to restore the Bowker Creek Watershed, we used stylized graphics to represent an open and above-ground creek and to depict many of the design with nature concepts that the Blueprint contemplates for the watershed.  We did this to help the community visualize what is possible, even in a highly developed watershed.”

“For Courtenay we wanted to tell a story of the continuum of watershed health, and for people to understand the role that riparian cover plays. By contrasting two watersheds,

one of which is heavily impacted, we are aiming to demonstrate that there is still time to get it right on the less developed watershed,” says Nancy Gothard.

“Truly this document was a very quick and readily publically available thing to produce. Council, the public and other agencies have all found it to be a useful document for discussion and education purposes.”

“In the RDN, we have seven basin-scale ‘water region’ areas for planning and communication purposes,” reports Julie Pisani, RDN Drinking Water and Watershed Protection Program Coordinator. “We used this framework to profile streams in each of those water regions, where stewardship groups via our Community Watershed Monitoring Networkhave been collecting water quality data for the past four years.”

“Our goal was to produce a publication that profiled the health of key streams in each water region and connected residents with the waterways in their neighbourhood. The State of our Streams publications we produced were modelled on the template used by the City of Courtenay:  map-based and easy to read. Hard copies were mailed to residents across the region, and the feedback was overwhelmingly positive.”

Jody, Nancy and Julie are examples of partners who bring strong enthusiasm and professional skill to fostering collaborative relationships for leveraged outcomes in their work in public education, local data collection, and policy improvements, to promote watershed health in their respective regions. They each consider it a success when they can achieve more outputs with fewer inputs, and have committed to continue to adopt a sharing approach to their work.

Visit the IREI homepage on the Vancouver Island community-of-interest: https://waterbucket.ca/viw/category/inter-regional-education-initiative/

Click on City of Courtenay – State of the Environment 2014

Click on Regional District of Nanaimo – State of our Streams 2015

Click on Beyond the Guidebook 2015: Moving Towards “Sustainable Watershed Systems, through Asset Management“

The Georgia Basin is comprised of lands and watersheds that surround and drain into the Salish Sea. This inland sea encompasses the Strait of Georgia, Puget Sound and the Strait of Juan de Fuca. Tributary lands include the east coast of Vancouver Island, Metro Vancouver and the Fraser Valley.