NATURE KNOWS NO BOUNDARIES IN THE COMOX VALLEY: Hosted by the City of Courtenay, the 2008 Learning Lunch Seminar Series provided the springboard for a regional team approach to break down boundaries through the 4Cs – communication, collaboration, cooperation and coordination – and better manage land and water resources

Published in June 2008, Living Water Smart is the provincial government’s vision and plan to keep British Columbia’s water healthy and secure for the future. An over-arching goal is to encourage local governments to do business differently. 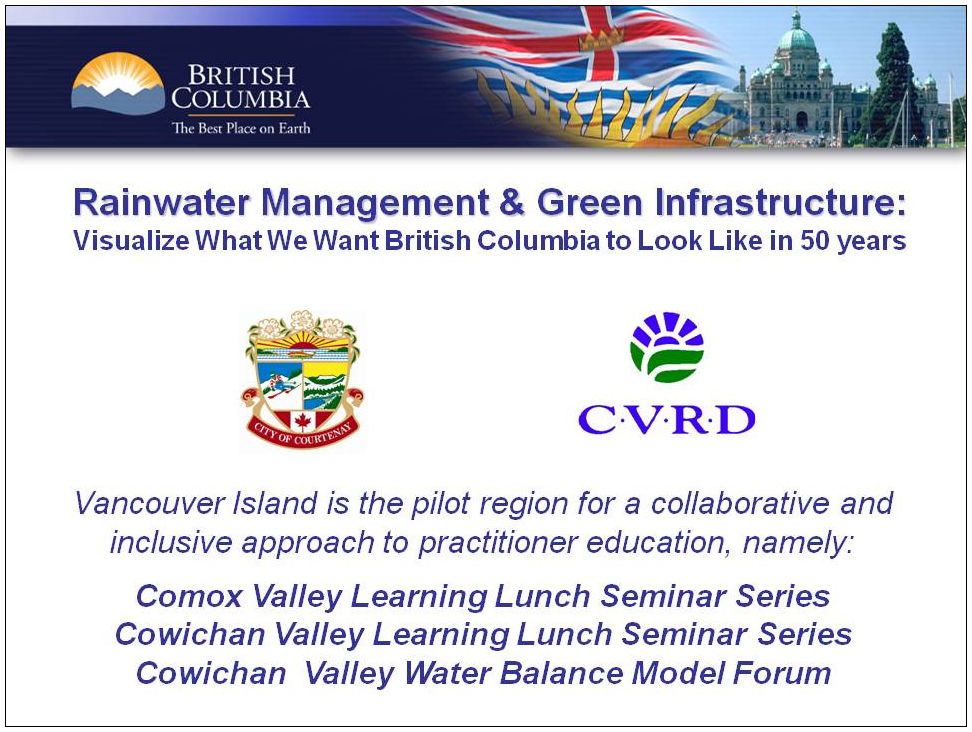 The Water Sustainability Action Plan comprises inter-connected program elements that give local governments and practitioners the tools and experience to better manage land and water resources.

High-level endorsement for a ‘regional team approach’ was provided when Mayors and Chief Administrative Officers representing the four Comox Valley local governments dropped in to show their support for the Learning Lunch Seminar Series.

Sandy Gray, City of Courtenay CAO,  lauded the objectives of the Learning Lunch Seminar Series. “We are thrilled by the work of CAVI. It is a tremendous initiative,” he said. “The cooperation that is taking place around a consistent approach to development is very critical to all of Vancouver Island.”

Watch a YouTube video of Sandy Gray speaking on behalf of the four governments: 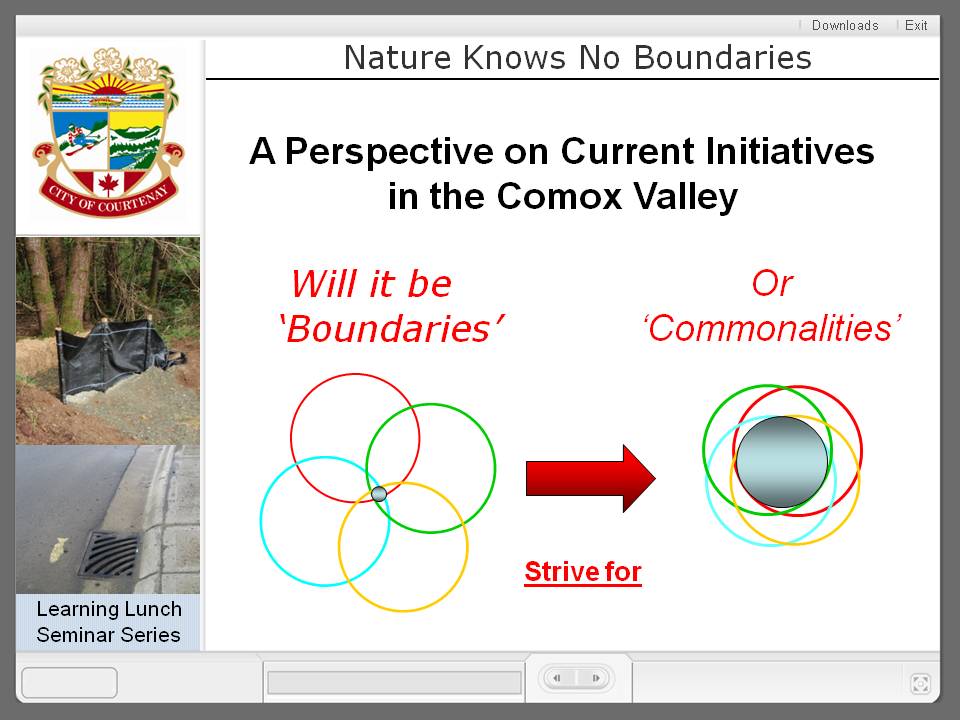 The Learning Lunch Seminar Series provides the springboard for bottom-up regional action to communicate, cooperate, collaborate and coordinate. It is expected that senior staff from the four Comox Valley local governments will now report back to their Councils and the Regional Board regarding moving forward with What Next action items arising from the Learning Lunch Series.

n setting the context for the day, Derek Richmond (Manager of Engineering, City of Courtenay) explained the difference between boundaries and what he called commonalites. “To be successful, we need to work outside our normal boundaries,” he said. “And we need to proactively communicate and work with others.”

Watch Derek Richmond explain why a Comox Valley regional team approach was the desired outcome for the series:

He opened his presentation with a satellite image of North America, and then progressively zoomed in to show the boundaries of the newly formed Comox Valley Regional District. “Man imposes his own boundaries. So, we have an issue of inconsistencies … or incongruities …  between natural and imposed boundaries which sets up a series of problems.”

“Our challenge is to work around and with boundaries,” continued Derek Richmond. “Ideally, we would like to shift the paradigm from boundaries to areas of commonality.”

“If we are to have a team approach, we need to think globally and act locally. We need to think of ourselves as a team, not as individuals within silos; and we need to break down boundaries through communication, collaboration, cooperation and coordination.”

Download a copy of Nature Knows No Boundaries – Context for a regional team approach, the PowerPoint presentation by Derek Richmond.

About the Learning Lunch Series

The Learning Lunch Seminar Series is the first step in building a regional team approach so that there will be a common understanding and consistent messaging regarding on-the-ground expectations for rainwater management and green infrastructure.

The Learning Lunch Seminar Series is part of the implementation program for  Beyond the Guidebook: The New Business As Usual, and is precedent-setting in its scope.

Beyond the Guidebook builds on the foundation provided by Stormwater Planning: A Guidebook for British Columbia, published in 2002, and incorporates lessons learned over the past six years in moving from planning to action.