FLASHBACK TO 2003 TESTIMONIAL: “In the United States, too often we see a cookie-cutter approach when guidebooks and manuals are replicated across the country. Not so with the British Columbia Guidebook – it is unique and it is innovative,” stated Tom Schueler, founder and former Executive Director of the Center for Urban Watershed Protection, one of the best known nonprofit organizations in the United States dedicated to research and education on watersheds

Tom Schueler is one of the best-known names in the United States in the field of urban watershed management. In his four decade career, he has written more than 50 stormwater design manuals, research reports on best practices, and other watershed guidance documents. Tom Schueler founded the well-known Center for Watershed Protection in 1992. Prior to founding the Center, he worked for ten years at the Metropolitan Washington Council of Governments, where he led the Anacostia Watershed Restoration Team—one of the first efforts in the United States to comprehensively restore an urban watershed.

After four decades, Tom Schueler continues to make a difference as the Executive Director of the Chesapeake Stormwater Network, a non-profit organization devoted to implementation of more sustainable stormwater practices across the Chesapeake Bay watershed. He also directs the Chesapeake Bay Stormwater Training Partnership, which provides webcasts, workshops and on-line training modules to train engineers on new practices.

In February 2003, Tom Schueler was scheduled to deliver a pre-conference workshop at the “National Conference on Urban Storm Water: Enhancing Programs at the Local Level” held in Chicago, Illinois. When a blizzard crippled air travel in the Northeast USA, the conference organizers asked British Columbia’s Kim Stephens to step in and fill the breach. In addition to substituting for Tom Schueler in co-presenting an alternative workshop, he also provided a cross-border perspective in delivering the keynote address.

“In 2003, the national stormwater conference held in Chicago was literally a watershed moment in the paradigm-shift that was then emerging in the field of urban drainage. One has to keep in mind, for example, that green infrastructure was not even part of the lingo in 2003. The shift in engineering practice from end-of-pipe thinking to looking at on-property solutions was in its infancy,” recalls Kim Stephens, Executive Director, Partnership for Water Sustainability.

“Participation in the conference was part of the communication and outreach plan for Stormwater Planning: A Guidebook for British Columbia. The Guidebook team knew that the Guidebook had put British Columbia in the vanguard of change in North America. The conference represented a timely opportunity to validate that fact-of-life for our BC audiences – because anybody who was considered somebody in North America would be attending. The big names included Tom Schueler, Andy Reese, Derek Booth, Eric Strecker, and so on.”

“By the time of the Chicago conference, there was growing awareness and interest throughout North America in the science-based approach that British Columbia was pioneering. Twelve months earlier, at the Watersheds 2002 Conference organized by the Water Environment Federation and held in Fort Lauderdale, I had delivered two papers. These foreshadowed the direction in which British Columbia was heading with our development of the Water Balance Methodology as the foundation for a performance target approach to capture rain where it falls. The Guidebook was released in June 2002.”

“Watersheds 2002 led directly to ‘sharing and learning’ presentations in three states – Washington State, Oregon and Georgia. In fact, it was the Oregon presentation that resulted in a member of the Chicago conference organizing committee to reach out with an invitation. As well, the United States EPA invited me down to Cincinnatti where they have one of their research labs. That was my first exposure to early version of video technology because that is how staff from other EPA labs participated in the seminar. The EPA folks were keen to learn about the Guidebook and the Water Balance Methodology that is at its heart.”

“In summary, the stage was set for my presentation on the Guidebook to an American audience in February 2003. When our flight lifted off from Vancouver and headed for Chicago, I had no inkling that 24 hours later a blizzard would cripple travel in the Northeast United States and change my life.”

About the record-breaking North American blizzard of 2003

The Blizzard of 2003, also known in the United States as the Presidents’ Day Storm II, was an historic and record-breaking snowstorm on the East Coast of the United States and Canada, which lasted from February 14 to February 19, 2003. It spread heavy snow across the major cities of the Northeastern and Mid-Atlantic states, making it the defining snowstorm of the very snowy winter of 2002–2003.

This snowstorm paralyzed much of the East Coast with its heavy snow. All in all, it was the most significant and powerful storm to affect the major cities of the Northeast since the Blizzard of 1996. Airports were shut down completely. With snow continually accumulating, road travel was nearly impossible.

The blizzard was part of a winter remarkable for its snowstorms in the affected states, where total snowfall for the season ranked in the top ten and even higher in some areas.

“We arrived in Chicago late on a Saturday afternoon and immediately learned that the conference organizers were concerned about the looming impact of the blizzard on conference attendance,” continues Kim Stephens. “The next day, Sunday, Bob Kirschner and Eric Strecker (from Portland, Oregon) sought me out and asked whether I would help out with Plan B for the pre-conference workshop on the Monday.”

“Eric Strecker was the member of the conference organizing committee who had reached out to me six months earlier with the invitation to share the story of our pioneering efforts in British Columbia. We had never met. But he had heard good reviews about my presentation, titled Learning from the British Columbia Experience, at the 2002 Oregon Stormwater Summit.”

“Tom Schueler and Ted Brown of the Center for Watershed Protection were scheduled to deliver a 6-hour workshop on ‘Smart Watersheds’. But with air travel shut down, they could not get to Chicago in time. With many delegates already on-site, the show had to go on. At 9:30PM on Sunday, Bob Kirschner emailed the announcement that Eric and I would co-deliver a half-day workshop. He wrote:

But now some GOOD NEWS for the temporarily disappointed “Smart Watershed” registrants:  Two conference attendees, Kim Stephens from British Columbia and Eric Strecker from Oregon have stepped forward and offered to present an afternoon workshop on stormwater and watershed planning. Kim’s presentation, “Smart Watersheds – A Canadian Perspective” and Eric’s presentation, “Low Impact Development – Think Before You Leap” will be featured in a “new” session on Monday afternoon from 1:00 until 4:30 p.m.  Many thanks to these two widely respected professionals for coming through for us.  All registrants of CWP’s Smart Watershed workshop — and all other Conference registrants — are invited to attend (at no charge, of course).

“Overnight, Eric and I created our presentation material. We agreed on a format for sharing our cross-border perspectives and went into action. Our objective was to stimulate an interactive session with our audience. We were a hit. The audience was appreciative of our eleventh hour teamwork.”

“Two decades later, a memory that sticks with me is the big grin on Bob Kirschner’s face at the conclusion of the impromptu workshop as he got up from where he was sitting, walked over to me and said: Kim, would you be willing to deliver the keynote tomorrow? Sure, I said without hesitation. And then I went and broke the news to my wife that I would be spending another evening on a PowerPoint presentation!”

Download a PDF copy of the presentation titled Urban Watershed Protection and Restoration Over Time: The British Columbia Experience in a North American Context.

“Kim’s experience as an advisor to governments in British Columbia, coupled with his American experience, gives him an interesting perspective on “cross-border” approaches to regulatory issues,” stated Bob Kirschner when he introduced Kim Stephens as the keynote speaker.

“Kim has played a leadership role in a series of innovative initiatives in British Columbia. His work related to Sustainable Development is featured in the book Dancing with the Tiger.”

“Kim has published extensively, and has been invited to make keynote presentations on ‘the British Columbia experience’ at conferences in Canada, Australia, and the United States. He his the principal author of a document titled Stormwater Planning: A Guidebook for British Columbia.”

“This document has attracted considerable interest because of its focus on how to integrate land use planning with stormwater volume management. It was Kim’s keynote presentation at the Oregon Stormwater Summit last May that first brought him to the attention of the Organizing Committee.”

“This led to the Committee inviting Kim to make a presentation at Wednesday’s session. This resulted in him being available yesterday and today to step in for Tom Schueler.” 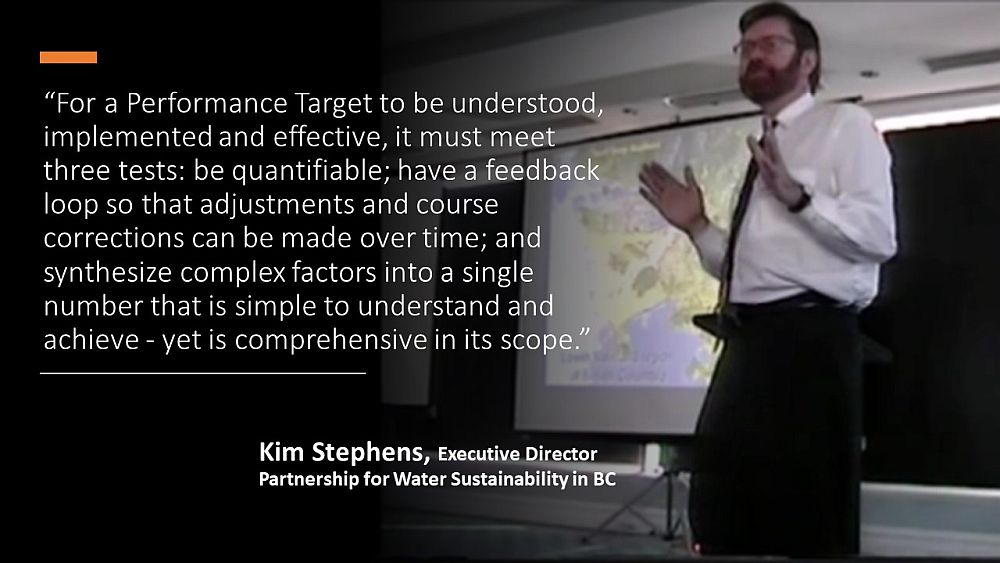 “Once I had agreed to deliver the keynote early the following morning, the question facing me was what would I say that would be attention-grabbing and compelling,” remembers Kim Stephens. “Because of my cr0ss-border experience, I decided that the best way to hook my audience on slide #1 would be to build my storyline around the cultural differences between Americans and Canadians. In this regard, one has to keep in mind that this pre-dates the polarization that has since become the norm in the United States.”

“In delivering the keynote address, I represented the British Columbia Inter-Governmental Partnership (IGP) that developed the online Water Balance Model as an extension of  Stormwater Planning: A Guidebook for British Columbia. The IGP is a consortium of federal, provincial and local governments.”

“British Columbia experience is that when there is a shared vision among representatives of different levels of government, it is possible to make things happen through a consensus-based approach. This reflects Canada’s historical origins which places a strong emphasis on the role of government and striving for the common good.”

“Our shared purpose motivation is in contrast to the American experience which is very much focused on the individual. Plus the system of checks and balances which seems to create barriers in reaching consensus on what is in the common good.”

“At the end of my presentation, Tom Schueler was the first person to rush to the podium to introduce himself and express his admiration for our British Columbia Guidebook. He had arrived just in time to hear me speak. To this day, one aspect of our conversation that still sticks in my mind was his reference to the City of Surrey case study. It impressed me that his knowledge of the Guidebook was that detailed.”

Download a PDF copy of the presentation titled Urban Watershed Protection and Restoration in British Columbia: Build the Vision; Create the Legacy.