CITY OF VANCOUVER’S RAIN CITY STRATEGY: “We know how to design it (green infrastructure). What we’re aimed at now is mainstreaming it,” stated Melina Scholefield, the City of Vancouver’s manager of green infrastructure implementation

In a feature article published by Pique Newsmagazine in May 2021, Stefan Labbé sets the context with this opening statement: “Green infrastructure promises to keep the worst of flooding and contaminated rivers at bay. But while it has set ambitious targets, Vancouver is falling behind many other big cities. Could Seattle offer an answer?” Stefan Labbé covers Climate and Environment solutions across British Columbia for Glacier Media. A former digital reporter at the Tri-City News, his work has appeared in the Guardian, the Globe & Mail and PBS Newshour. 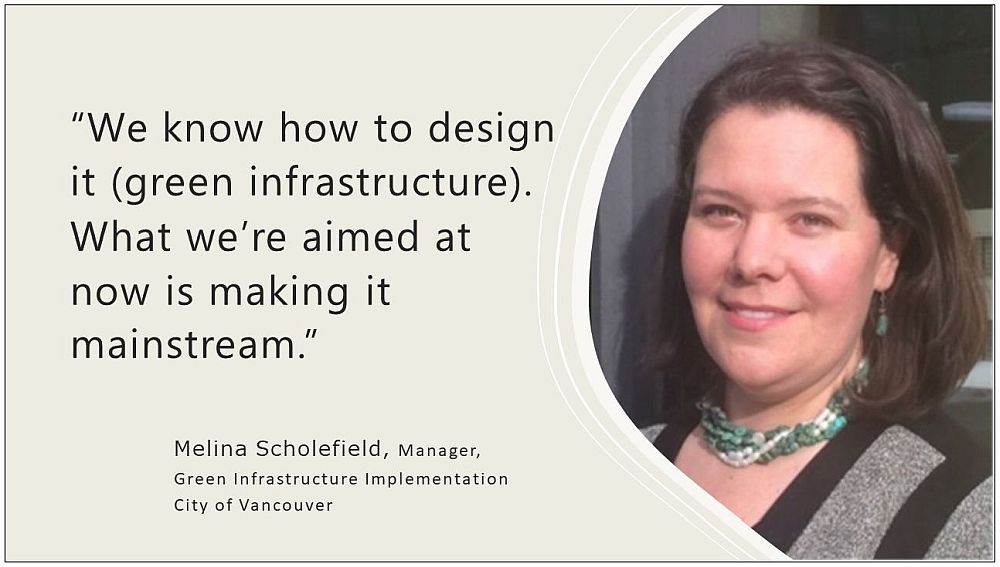 “Vancouver’s narrative over the past two decades has often hinged on densification — how to manage the rise of dull grey towers framed by distant green mountains,” states Stefan Labbé in his opening sentence.

“But with every megaton of carbon dioxide belched into the atmosphere, the risk of rising seas and increasingly heavy rainfall has pushed the region toward letting more of that forest creep back into the city.

“Known as ‘green infrastructure’, the idea is to simulate a natural water cycle wiped out from decades of city building,” explains Stefan Labbé. He then quotes Melina Scholefield, the City of Vancouver’s manager of green infrastructure implementation, as follows:

“The Celebrating Green Infrastructure Program: Showcasing Innovation Series was launched in May 2006 in the Metro Vancouver region as a provincial pilot. The program goal was to build regional capacity through the sharing of approaches and lessons learned as an outcome of ‘designing with nature’,” states Kim Stephens, Executive Director, Partnership for Water Sustainability.