YOUTUBE VIDEO: “What we believed to be ‘unachievable’ in 1998 may in fact now be within our grasp,” stated Kim Stephens when he provided a UDI Victoria audience with the provincial context for developing the online Water Balance Model as an extension of British Columbia’s Stormwater Guidebook (Flashback to March 2008)

Comprehensive and coordinated use of the decision support tools and calculators found at https://waterbalance.ca/ would help communities achieve this desired outcome.

Development and Watershed Protection are Compatible?
Since When?

In March 2008, UDI VIctoria featured a presentation on the Water Balance Model for British Columbia as part of its luncheon program.

To draw attention to the event, Marie Savage (UDI Executive Coordinator) sent out the following as a promotional flyer:

Urban land use has been degrading the natural environment for more than 100 years. Sit on that for a while. 100 years, perhaps more. Holy smokes. So what’s all this talk about developers and builders, the ultimate urban land users, protecting watersheds?

t’s true. All it took was a twist and a twirl and the connection between runoff, sewers, and the resulting stress on natural systems came out of the pipework. Developers who increase the amount of pervious surfaces on their sites keep rain on-site, delay runoff, and reduce flooding. City planners and engineers love this. The theory is infrastructure costs go down the less the system is used. Okay, pretty plans are one thing – but how do we know that what we’re doing is really making a difference?

Kim Stephens can probably tell you. He’s a provincial leader in rainwater management and the Program Coordinator of the Water Sustainability Action Plan for British Columbia. He’s coming to talk about an updated tool for the development industry called “The Water Balance Model.” Unveiled just days ago, you can be part of the beta-testing from now until the end of March.

He’ll also tell us about CAVI – a network developed to encourage water-centric land-use planning that involves a wide range of stakeholders from government to First Nations to developers, NGOs and the public.

According to Marie Savage, the UDI luncheon program reaches out to a broad audience mix representing diverse backgrounds, including: developers, realtors, community and municipal. 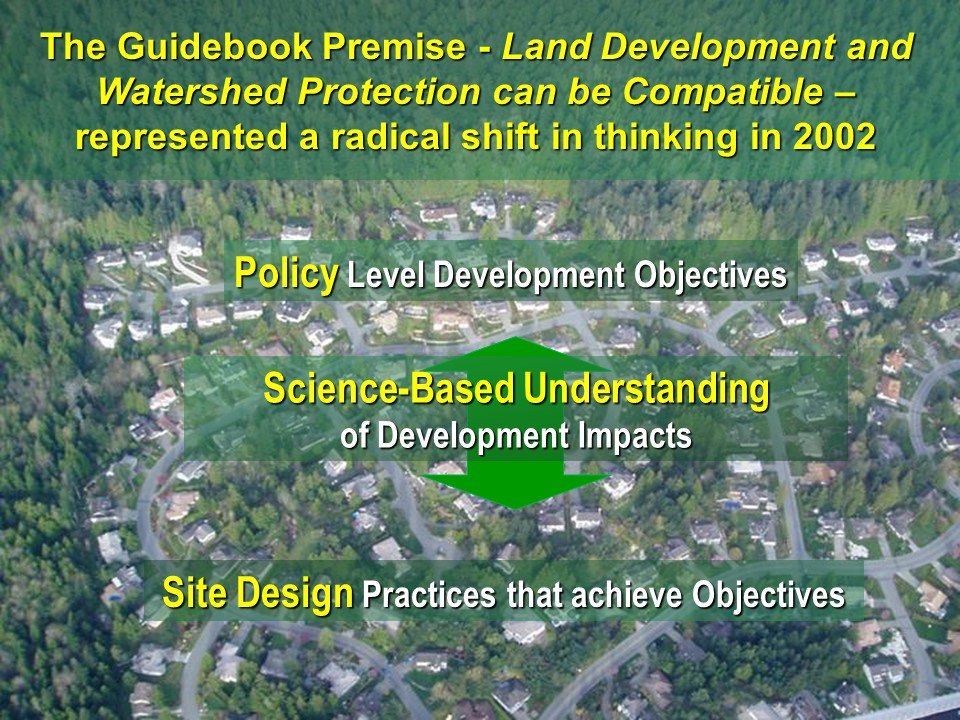 What We Once Believed to be Unachievable…

First, he provided a provincial context for development and application of the Water Balance Model when he explained “where we have come from”.

Then, he introduced the program elements for Convening for Action on Vancouver Island to foreshadow “where we are going”.

In speaking to the land development versus watershed protection compatibility challenge, his key message was this:

What we believed to be ‘unachievable’ in 1998 may in fact now be within our grasp.

Kim Stephens reviewed the science-based breakthrough in understanding that led to development of the Water Balance Model as an extension of Stormwater Planning: A Guidebook for British Columbia, released in 2002. 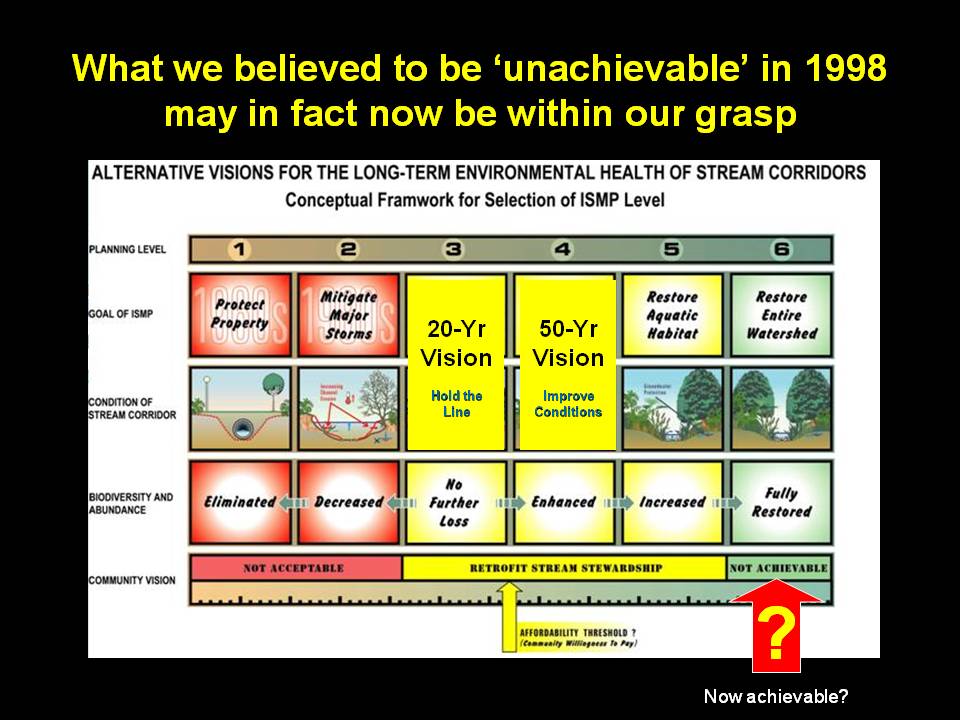 Early in his presentation, Kim Stephens introduced a graphic that was developed a decade ago in response to the salmon crisis.

Titled Alternative Visions for the Long-term Environmental Health of Stream Corridors (see below), the graphic is a key communication tool in the Guidebook and is the centrepiece of Chapter 9 which is titled Developing and Implementing an Integrated Stormwater Management Plan

“The image of a stream corridor is much like the canary in the coal mine. This led us to develop the concept of planning levels as a decision tool,” stated Kim Stephens.

“Looking back, and viewed from a salmon habitat perspective, we were not that hopeful about what we could realistically accomplish over time.”

“A decade ago, we thought that the best we could do would be to Hold the Line for 20 years; and if we could do that for 20 years, we believed that we might be able to improve conditions over a 50-year period.”

“We went back to the basics to gain an understanding of how we could protect or restore the natural water balance by changing the way land is developed,” continued Kim Stephens.

“Early success on the ground has given us increasing confidence that the 50-year vision is within our grasp.”

“A decade ago, the breakthrough in thinking came when we developed the concept of a Rainfall Spectrum to categorize the rainfall-days that occur each year.”

“This approach helped overcome fear and doubt because we were able to demonstrate that it is possible to capture rain where it falls, and in so doing prevent rainwater runoff.”

To download a copy of a handout that was prepared for the UDI Luncheon, click on Create Liveable Communities and Protect Stream Health: Water Balance Model powered by QUALHYMO integrates the site with the watershed and the stream

To download a copy of the PowerPoint slideshow presented by Kim Stephens, click on Development and Watershed Protection are Compatible? Since When? 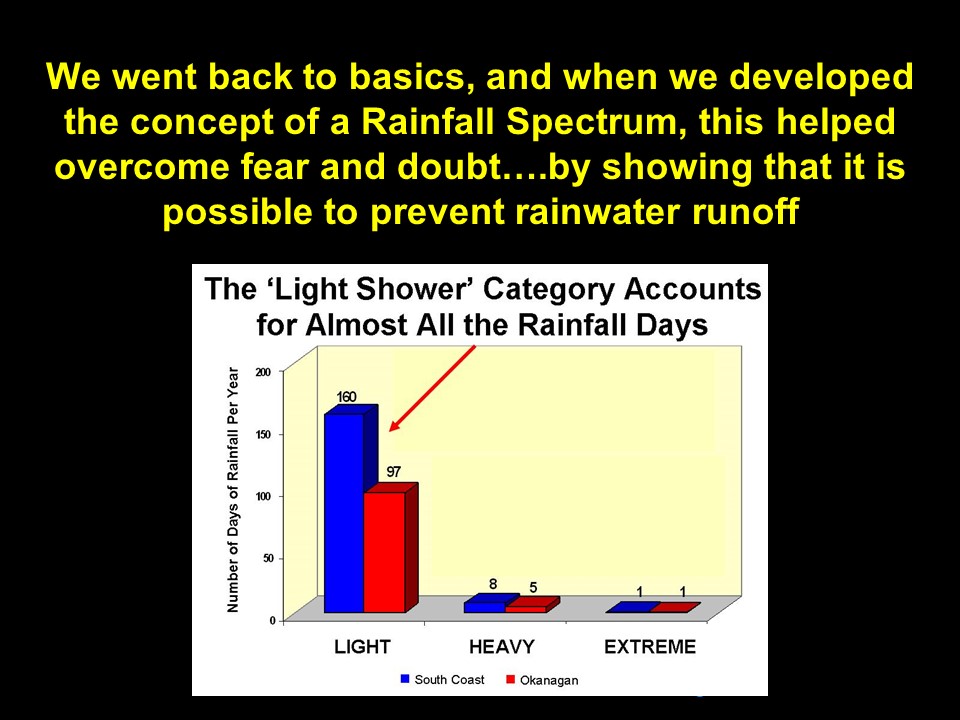 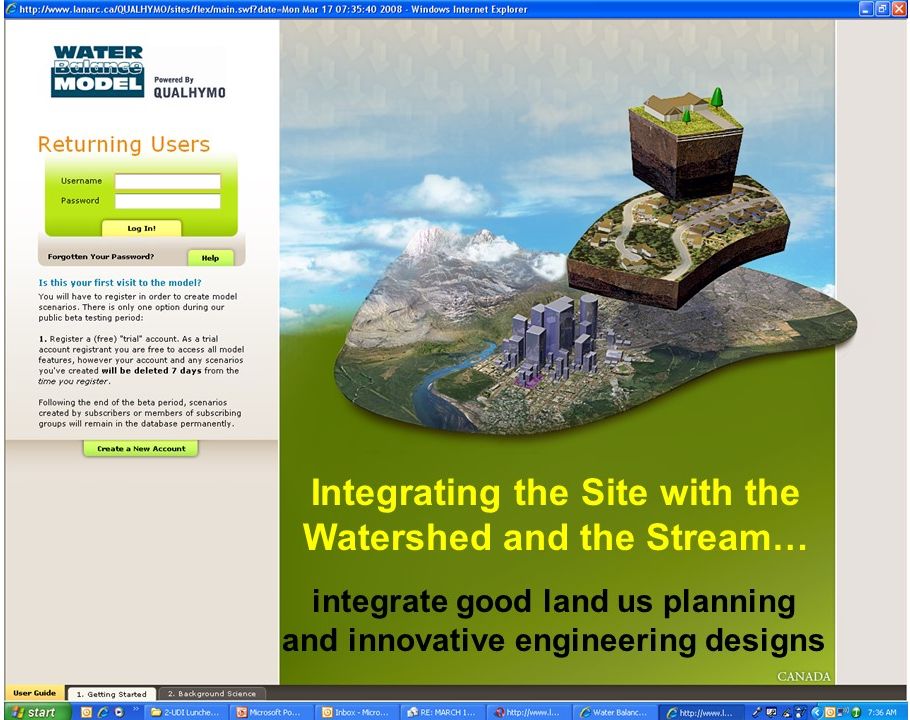 CLICK ON THE IMAGE TO VIEW THE POWERPOINT STORYLINE 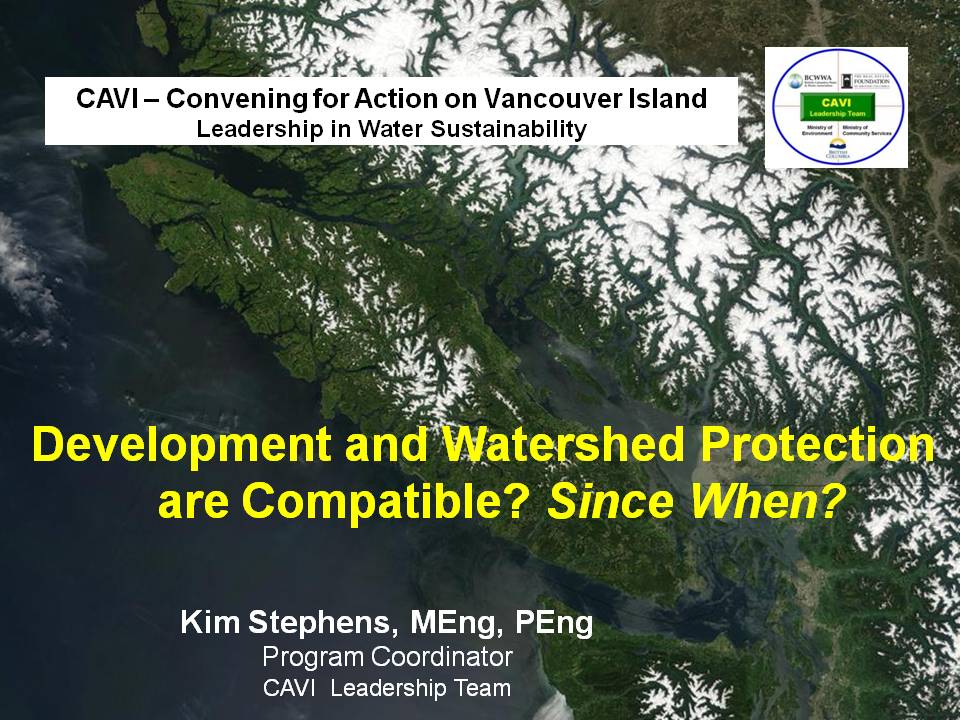