Andy Reese is a prominent and popular American water resources engineer, writer, speaker, and textbook author. In February 2013, he delivered a webinar for Forester University titled Voodoo Hydrology – Pitfalls of Urban Hydrology Methods & What You Need to Know. Response to the webinar was overwhelming and resulted in the Voodoo Hydrology Annual Webinar Series. On December  7, Forester University is hosting the 5th in the series.

“The rise of Green Infrastructure and Resilience Planning opens the door for newer Voodoo like never before,” observes Andy Reese, water resources engineer and author

Andy Reese coined the term Voodoo Hydrology in 2006 to describe the misapplication of science that characterizes drainage engineering and stormwater management practice.

Should We Trust the Results of Commonly Applied Methodologies?

Protection of watershed health starts with an understanding of how water gets to a stream from individual sites, how long it takes, and whether there are impacts along the way. A lesson learned is: avoid the pitfalls of Voodoo Hydrology!

According to Andy Reese, “My old friend Dr. Tom Debo, late of Georgia Tech and co-author of our textbook Municipal Stormwater Management, is fond of saying, ‘I love urban hydrology. They can never prove you are wrong, only inconsistent.’ As a stormwater community, we have for years relied upon common urban stormwater hydrologic design methodologies and trusted their results. But, should we?”

He cautions that: “We must understand that urban hydrology, including newer Green Infrastructure sizing approaches, as commonly practiced, is an inexact science where we are simply trying to get close to the right answer. We are dealing with probabilities and risk, a changing land-use environment, and many real-world factors that can alter the answer. The applications we may encounter can vary radically.”

“Perhaps, if we make enough estimates of enough factors, the errors in estimation, high and low, will average out to the right answer. This is where voodoo really comes in handy”

“To ensure proper application, it is essential to understand the inner workings of the black box (maybe black magic) and unstated assumptions inherent in urban stormwater hydrology that we commonly use (e.g., computer packages),” concludes Andy Reese.

Join Andy Reese as he exposes the black box of urban hydrology. He will explore the inner workings of some of the most popular urban stormwater methodologies, as well as their common misuse and misapplications. Through discussion of the associated elements and pitfalls, he will impart a comprehensive understanding of urban stormwater hydrologic methods and their proper application.

“We need to look at the watershed as a whole, the flow paths and timing of flow, the total mass balance and effects of change before beginning to examine the design of mitigation strategies,” notes Jim Dumont in adding his voice of experience to that of Andy Reese. Jim Dumont is the Engineering Applications Authority for the Partnership for Water Sustainability in British Columbia.

“The need to protect headwater streams and groundwater resources in British Columbia means communities must expand their view from one that looks at the site by itself, to one that considers the site, watershed, stream and aquifer as an integrated system.”

“We cannot make the assumption that previous methods of analysis used for drainage design will be adequate; rather, we must utilize appropriate methods which include the streams that we are trying to protect,” concludes Jim Dumont.

Click on  Voodoo Hydrology: Andy Reese on ‘Pitfalls of Urban Hydrology Methods & What You Need to Know’

And then click on Primer on Water Balance Methodology for Protecting Watershed Health  because it provides guidance on how to apply the methodology to establish performance targets that link the site, watershed, stream and aquifer, namely: storage volume, infiltration area and flow release rate. 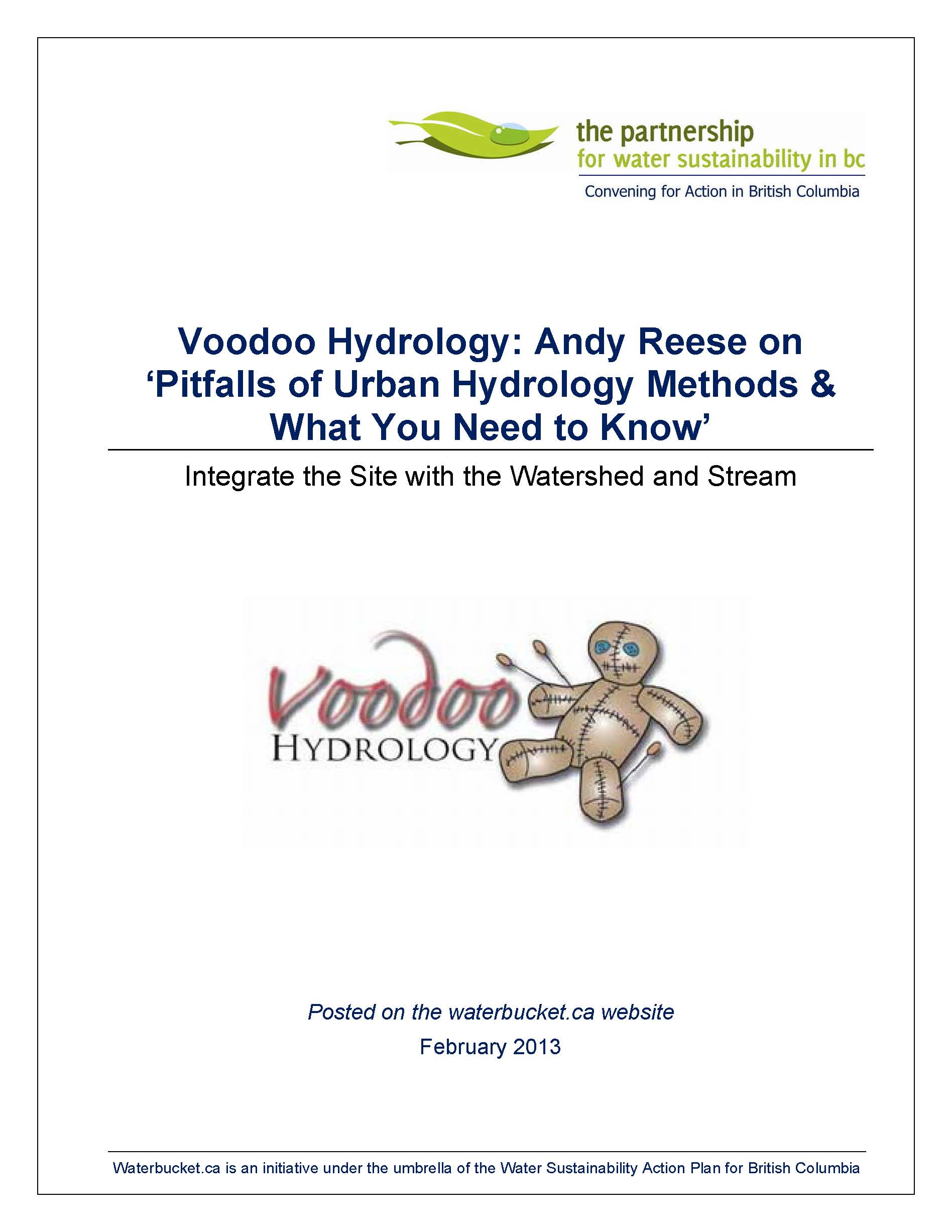