Towards a Water-Resilient Future (Video): Released by the Senate of Berlin in August 2017, the plan “StEP Klima KONKRET” seeks to mimic nature and tackle extreme conditions by making Berlin a “Sponge City”

Heat waves and rainstorms will become common in northern Germany as climate change deepens. To make Berlin more resilient and livable in the coming future, the Senate of Berlin in August 2017 released the plan “StEP Klima KONKRET”.

This plan seeks to tackle extreme conditions by making Berlin a “Sponge City” or Stadtschwamm in German.

“We’ve been using the term ‘Stadtschwamm,’ or ‘sponge-city’,” says Heike Stock, the municipal official in charge of the Berlin program. “The key is to avoid sealing up too much of the ground surface with concrete or tarmac. Wherever possible, we want water-permeable surfaces. For example, parking areas and median strips can be resurfaced to allow water absorption into the ground.

“The StEP Climate KONKRET is a tool and ideological box for climate adaptation. It deepens and profiles the contents of the StEP Climate 2011, in particular with regard to measures to adapt the city of Berlin to the effects of climate change.”

The Abstract states that, “In order to accelerate implementation, StEP Klima KONKRET emphasises integration. The goal is adaptation in the form of no-regret measures that would make social, economic and ecological sense even without climate change.

“StEP Klima KONKRET is therefore developing tools and ways of integrating adaptation measures in processes, programmes and projects at all levels of planning. Adaptation also requires a multi-disciplinary approach: This concerns a variety of sectors – from housing to transport and wastewater planning.

“Reference projects serve as models and pilot projects. Examples and calculations provide supporting arguments in order to increase the acceptance of adaptation measures.”

Read Berlin plans to implement climate change mitigation strategies, an article in the Berlin Journal in 2017.

Read Sponge City: Berlin plans for a hotter climate, an article published in 2016 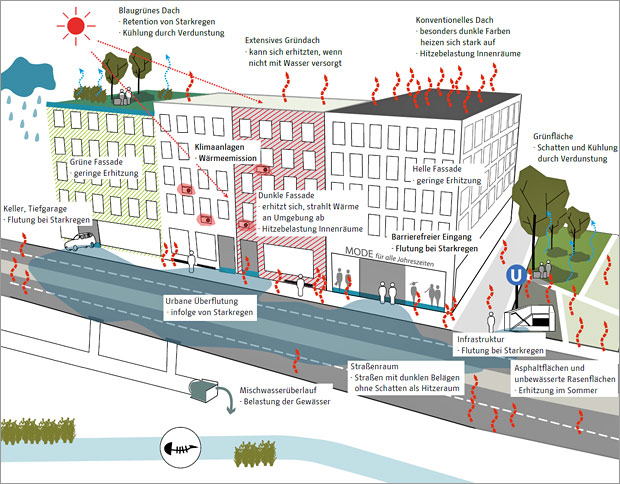 “The basic idea of a ‘Sponge City’ is that we want to keep the rainwater in the city. When water evaporates, the city is cooled accordingly,” states Carlo Becker, the architect of Berlin’s Sponge City Strategy which harnesses rainwater and manages heat.

“For us the rainwater is a resource that shouldn’t be carried away anymore, but has to remain in the city.”

The Sponge City Strategy aims to keep rainwater where it lands, to imitate the natural water cycle.

A neighbourhood in Rummelsburg, built 20 years ago in east Berlin, has become a large-scale example of the Sponge City concept. Rummelsberg is but one example. Neighbourhoods across Berlin have implemented similar initiatives.

“We have extensive green roofs of approximately 6 to 8 centimetres,” reports Heiko Seiker, Urban Hydrologist. He is the brains behind the neighbourhood’s innovative use

of rainwater as a resource.

“From there, the water flows into courtyards. Underneath there is a garage. On top of the garage is a soil layer of almost 80 centimetres. It is like a sponge. It soaks the water during heavy rainfall. Then it is used by the plants. And finally it is evaporated.”

“In the entire area, there is no storm sewer system. No conventional pipe system, The water flows from the road surface into the swale. From here it is infiltrating into the ground. On hot summer days you can really feel the coolness here. It is much cooler here compared to other parts of the city…because of the evaporation. You can say that it is natural air conditioning.”

Rainwater Management
by Another Name

Heiko Seiker is a champion for case study-based research project to convince cities and municipalities of the need for more initiative and the implementation of flood and heat prevention measures as well as to identify and document good examples and concepts in this field.

“This modern stormwater management system approach is not only gaining ground in Germany but also worldwide and has several terminologies,” says Heiko Seiker, He defines these alternative descriptions of a water balance approach as follows::

“The original purpose, in respect to stormwater systems, was the rapid dissipation of precipitation away from the cities. A modern water management system tries to re-define the old practice by a different, new and sustainable approach.”

Visit the website for Federal Institute for Research on Building, Urban Affairs and Spatial Development to read about Preventive stormwater management for urban flash floods and overheated cities – A joint municipal task

For more than a decade, the language used by drainage practitioners around the world has been changing to reflect the evolving objectives in doing business differently. Stormwater Management, Low Impact Development, Sustainable Drainage, Green Infrastructure, RAINwater Management…. what is an appropriate term to use?

In British Columbia, the Water Sustainability Action Plan is endeavouring to provide clarity of meaning so that there will be consistency of understanding province-wide. This led to release of an explanatory document in March 2009.

“It is important to use descriptions which are linked more closely with the objectives and ideas – stormwater, sustainability, runoff, rainwater, infrastructure, etc,” stated Robert Hicks, Senior Engineer with Metro Vancouver, in the document released by the Water Sustainability Action Plan. “Ideally, the right choice of wording will frame the concepts clearly, and provide the terminology with some longevity. Clarity will help with uptake – jargon and anachronism needs to be avoided as they can obscure the objectives and ideas.”