WHAT HAPPENS ON THE LAND MATTERS: “The benefits of source control cannot be understated,” stated John Argue, pioneer and champion for Water Sensitive Urban Design in Australia

Water-sensitive Urban Design (WSUD) is a term coined by a multi-disciplinary group of practitioners and academics in Western Australia, in the early 1990s, to describe the ‘new thinking’ then emerging about sustainable water cycle management in the urban landscape in Australia. To assist practitioners in designing rainwater source control measures, A Handbook for Australian Practice was published in 2004.

Edited by John Argue, a leading Australian authority in the field of urban hydraulics and hydrology, the WSUD Handbook is a compilation of proven approaches that are aimed at solving everyday problems of small-scale rainwater management. John Argue is the former head of the Urban Water Resources Centre

at the University of South Australia.

“Prior to the 1990s, engineering approaches to stormwater management were simple: gather as much of it as possible and send it down pipes, into drains and out into the ocean,” wrote Andrew Heaton in an article about John Argue and the 2-day course that he teaches on WSUD principles for Engineering Education Australia.

Hold the Rain Where It Falls

Download Modern Approaches to Stormwater Management to read the complete article by Andrew Heaton as published by sourceable.net in Australia.

Sustainable rainwater management practices, such as rain gardens, allow cities to use rain as a resource. This helps developed watersheds (such as in an urban landscape) mimic the function of natural systems.

John Argue has taught and carried out research in urban hydraulics and hydrology since 1976 at the University of South Australia (formerly South Australia Institute of Technology). This work led to the publication by Australian Road Research Board (ARRB) in 1986 of Storm drainage design in small urban catchments – a handbook for Australian practice.

This book has been widely used by engineers and technical officers in consulting practices and municipal agencies across the nation. This handbook introduced retention technology to Australian practice.

In 1987, John Argue focused his interests on the application of retention practice to flood control, pollution control and stormwater harvesting. He published the results of this research in WSUD: basic procedures for ‘source control’ of stormwater – a Handbook for Australian practice.

This document sees the problem of flooding in the urban landscape as the prime task to be solved by water engineers and forms the knowledge base of the Stormwater Management (Source Control) workshop delivered by Engineering Education Australia. 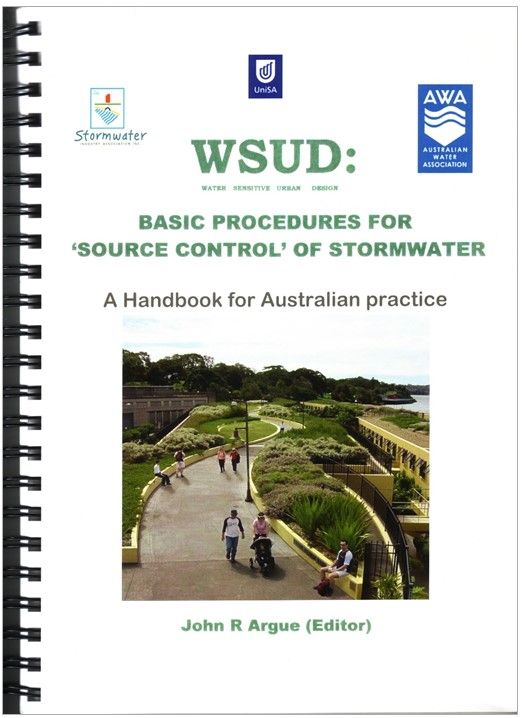