FLASHBACK TO 2011: From Stormwater to Rainwater – POLIS Project and University of Victoria Environmental Law Clinic released "Peeling Back the Pavement" 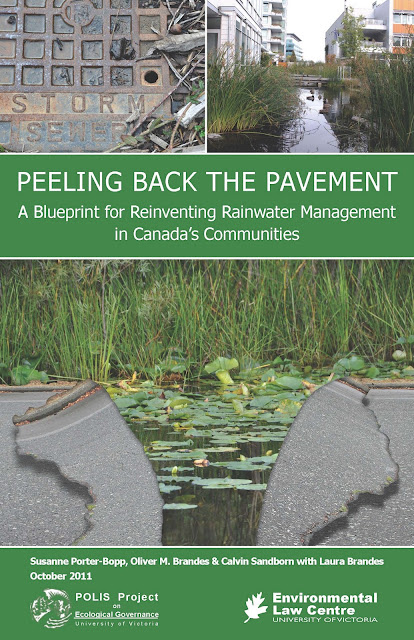 Create a Legacy: From Stormwater City to Rainwater City

In October 2011, the POLIS Project on Ecological Governance in partnership with the University of Victoria’s Environmental Law Centre released Peeling Back the Pavement: A Blueprint for Reinventing Rainwater Management in Canada’s Communities.

This was an instalment in the POLIS water sustainability handbook series for decision makers, policy analysts, community leaders, and water managers.

Co-authored by Susanne Porter-Bopp, Oliver M. Brandes, and Calvin Sandborn, Peeling Back the Pavement outlines the perceived problems with conventional stormwater management and examines potential solutions for moving toward sustainability.

“Rethinking the way we deal with rain and snowmelt in our cities means replacing conventional pipe-and-convey systems with an approach that recognizes rainwater as a valuable resource while, at the same time, reducing runoff volume and improving runoff quality,” states Oliver Brandes, co-author and POLIS Co-Director.

“Peeling Back the Pavement provides a comprehensive action plan outlining the crucial steps necessary for changing the way communities govern stormwater. The blueprint describes measures that local and senior levels of government can take to move from the current system of stormwater management to one based on rainwater management.”

The approach we have taken in British Columbia differs due to the nature of the root problems being solved. The critical issue in British Columbia is the damage and loss of habitat caused by development and erosion of the headwater streams,” states Jim Dumont, article co-author and Engineering Applications Authority for the BC-based Water Balance Model Partnership.

The inspiration for “Peeling Back the Pavement” was a report titled Re-Inventing Rainwater Management: A Strategy to Protect Health and Restore Resources in the Capital Region,

Released by the Environmental Law Clinic at the University of Victoria in February 2010, “the report describes the environmental and stream health problems in the

Capital Region that are the legacy of an obsolete 19th century stormwater management system—a system that fails to respect natural systems and water cycles,” according to Calvin Sandborn.

In this webinar, the guest speakers discuss the need for a new paradigm of rainwater management in Canada’s urban environments and outline positive policies and initiatives already underway in communities across the country and beyond.

To view a recording of the webinar, click on A Tale of Two Cities.

Electronic copies of Peeling Back the Pavement: A Blueprint for Reinventing Rainwater Management in Canada’s Communities are available for download on the WSP website.