With release of Stormwater Planning: A Guidebook for British Columbia in June 2002, BC was the first provincial or state government in North America to adopt the Water Balance Methodology. The methodology enables local governments to establish performance targets for land use. The goal is to protect watershed and stream health.

Immediately upon release of the Guidebook, an Inter-Governmental Partnership co-chaired by the Province and Environment Canada was formed. The Partnership mandate was to develop the Water Balance Model for British Columbia as an extension of the Guidebook.

The formal launch of this scenario comparison and decision support tool was coordinated with the Union of British Columbia Municipalities (UBCM). The venue for the launch was the Urban Forum at the Annual UBCM Convention in September 2003. 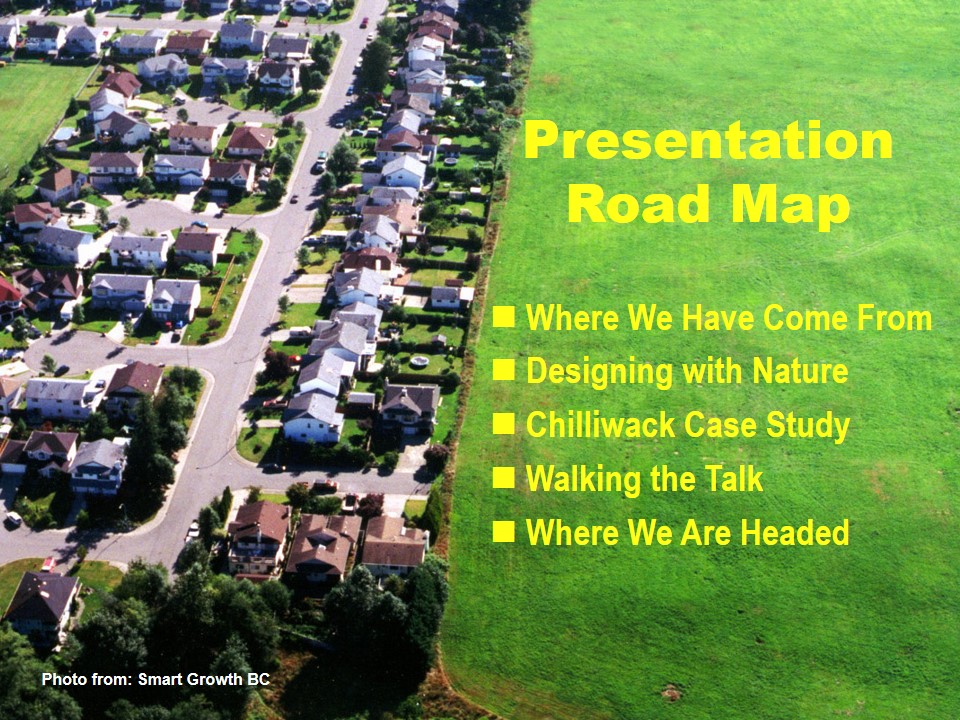 Designing with Nature –
Walking the Talk for Sustainable Community Design

In September 2003, UBCM organized a half-day Urban Forum as part of its Annual Convention.

Organized in two halves, the Forum coupled a presentation on a 100-year vision for the Metro Vancouver region with a presentation on an inter-governmental initiative to change the way land is developed and water is used in British Columbia.

The story behind this win was presented by Johnny Carline, Metro Vancouver Chief Administrative Officer, in the first half of the Forum.

The year before, in June 2002, release of BC’s Stormwater Guidebook quickly gained international recognition for BC as a leader in implementing a natural systems approach to rainwater management in the urban environment.

The story of this initiative provided context for the second half. 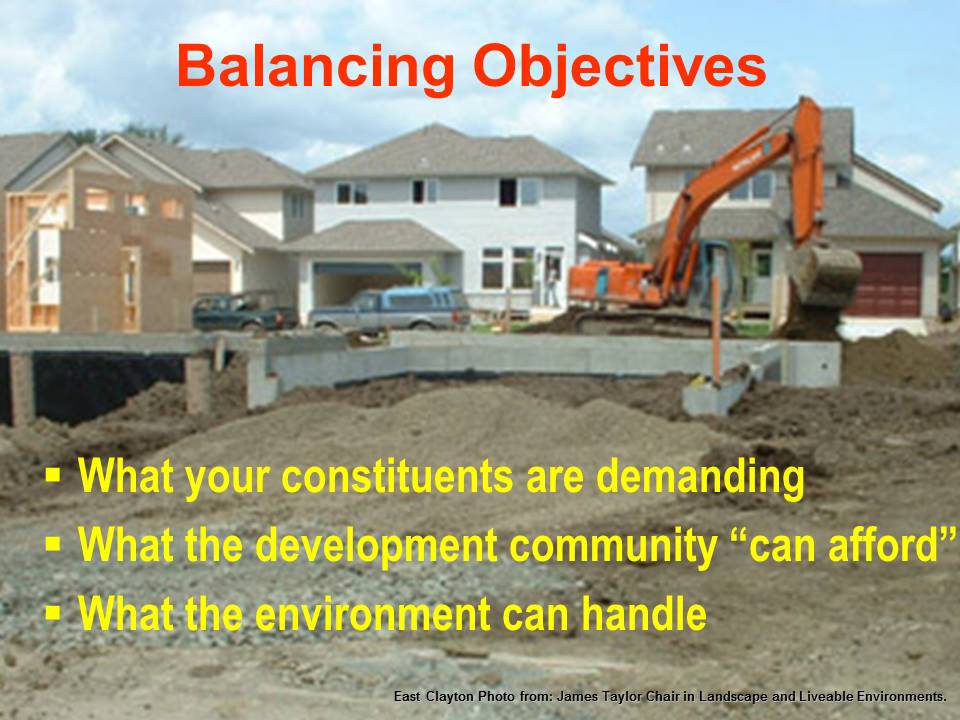 “The combination of the two presentations was quite powerful,” stated Surrey Councillor Marvin Hunt, Forum Chair, in his closing remarks.

“Because the Guidebook and Water Balance Model presentation was about on-the-ground action, it showed how to make the 100-year vision real to BC’s elected representatives.”

“The take-away message is clear: If communities design with nature, the 100-year vision will become a self-fulfilling prophecy.”

The presentation was organized in five parts. Mayor Janyk opened and closed. Dipak Basu provided the core content; he showcased Chilliwack examples. Kim Stephens bridged into and out from the Chilliwack case study.

Mayor Barry Janyk was a driving force and the Moderator for the SMARTSTORM Forums that were held in Sechelt, Abbotsford and Pitt Meadows. SMARTSTORM created the momentum that resulted in the Stormwater Guidebook.

Kim Stephens was the organizer and leader of the Presentation Team for the SMARTSTORM Forums, is the principal author of the Stormwater Guidebook, and is recognized internationally as a leading expert in water balance management.

Dipak Basu’s pioneering efforts in stormwater management in BC date back to the 1970s when he was with the City of Surrey. Through his efforts, the Chilliwack Manual was developed as a case study application of the Stormwater Guidebook, and all new subdivisions in the City are being developed in accordance with the water balance methodology.

To download a PDF copy of their PowerPoint presentation package, click on Designing with Nature – Walking the Talk for Sustainable Community Design (16.5MB).

“The Guidebook was developed to help all communities, and especially those which must develop and implement the stormwater component of a Liquid Waste Management Plan,” explained Kim Stephens.

“The Guidebook has established science-based performance objectives and targets for designing individual sites and entire neighbourhoods to function hydrologically as though they are still naturally forested.”

“It was developed as an extension of the Guidebook to answer questions about the effectiveness of source controls, demonstrate how to meet performance targets for water balance management at the site, neighbourhood and watershed scales, and derive feasibility and affordability relationships.”

Link to Sustainable Land Use

“They provide context and a framework for the environmental, economic, social and governance values that shape communities and regions.”

“The Water Balance Model promotes a watershed-based approach that recognizes the relationships between the natural environment and the built environment, and manages them as integrated components of the same watershed.”

“In the interactive session, it was clear that our story had resonated with my fellow elected representatives. They got it!”

“It is important to acknowledge that Johnny Carline’s presentation of the 100-year vision had primed the audience.”

“He painted a picture of the destination, which is what we want the regions of BC to look like for our grandchildren and their children.”

“We then provided a road map of how we can get there by doing business differently and designing with nature,” concluded Mayor Janyk. 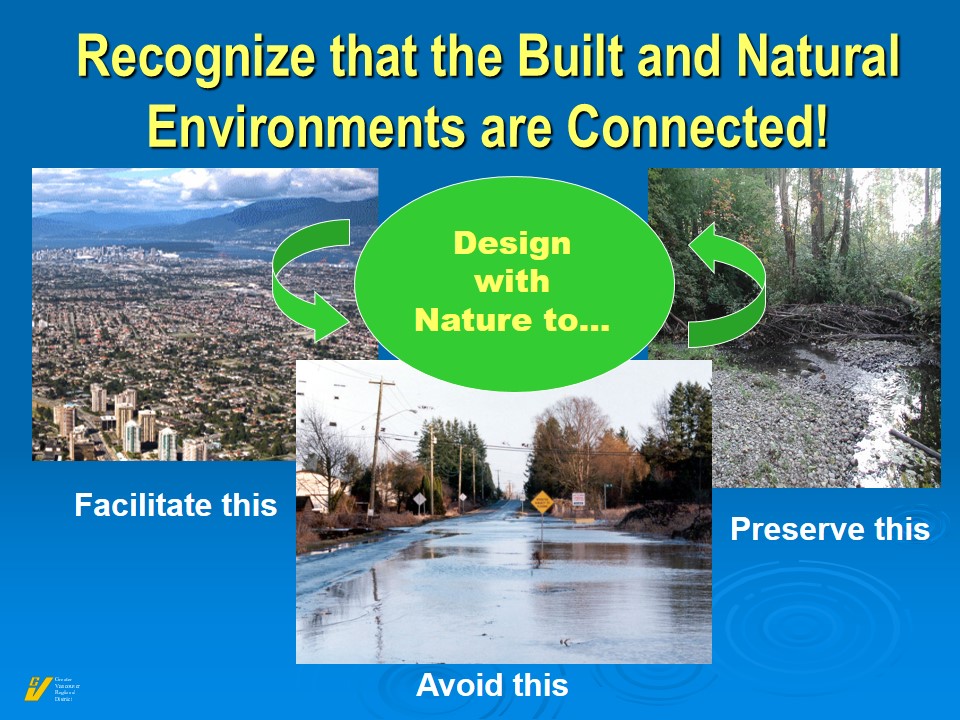 In 2003, BC Politicians Embraced Water Balance Thinking and
“Design with Nature”

“With release of Stormwater Planning: A Guidebook for British Columbia in 2002, the Partnership set out to change the way land is developed in BC,” states Ted van der

“To create change, our initial focus was on the ability of the landscape to absorb rainfall. Now, our emphasis is on the movement of water through the ground, and the resulting baseflow to streams.”

“Our mission is to influence the culture in the local government setting. This takes patience and time.”

“From the start, we have had high-level political endorsement and support. Notably, in September 2003, the Union of BC Municipalities provided us with a platform to tell our story.”

“At the 2003 UBCM Urban Forum, we challenged BC’s politicians to walk the sustainability talk and apply a ‘design with nature’ approach to the design of their communities.”

“And, we formally launched the Water Balance Model for British Columbia as an extension of the Guidebook.”

“The Water Balance Model is a means to an end: think like a watershed.”

“The tool promotes awareness and action. Our efforts are now bearing fruit. A ‘design with nature’ land ethic is taking hold in many communities,” concludes Ted van der Gulik.