YOUTUBE VIDEO: Rising to the Challenge at Stormwater Australia 2016 – going back to basics to provide a common understanding of “Water Balance 101” (Module 2)

The keynote presentation by Kim Stephens at the 2016 Rising to the Challenge Conference organized by Stormwater Australia was structured in five parts: a front-end that set the context, followed by four ‘modules’ that elaborated on the theme “parallel journeys” and provided perspective regarding and insight into the “top-down & bottom-up” approach that characterizes collaboration in the British Columbia local government setting.

Module 2, Water Balance 101, is the subject of the YouTube video presented below.

Understand the Watershed as a Whole System

The ‘Coho salmon crisis’ in the 1990s was a driver for intergovernmental action in both BC and Washington State. The decade was characterized by collaboration and cross-border sharing and learning at the provincial and local government scales. In 2000, Canada and the United States signed a Joint Statement of Cooperation on the Georgia Basin and Puget Sound Ecosystem. The two countries agreed on the need to maintain sustainable ecosystems and communities in the face of continuing population and economic growth.

In the second half of the 1990s, several streams of thinking converged, with a key trigger for action being the Fish Protection Act (1997). Implementation led directly to the SmartStorm Forum Series (1999-2001) and Stormwater Planning: A Guidebook for British Columbia (2002). This program built on insights and lessons learned from Washington State experience and research.

In the late 1970s and 1980s, Washington State jumped out ahead of most of the United States because several stormwater utilities were formed (the first in the nation). Puget Sound leadership resulted in financial, technical and staff resources that were focussed on dealing with the root causes of stormwater issues. Local government managers recognized the need for more technical information to help make more informed stormwater management decisions. They pooled resources to create the Center for Urban Water Resources Management at the University of Washington, headed by Richard Horner.

Washington State research into “root causes” explained WHY communities need to mimic the Water Balance to protect aquatic habitat and ecosystems. The impact of “science-based understanding” was transformational. Development of communication tools to explain the science opened minds and moved the conversation beyond rhetoric. In 2002, BC’s Stormwater Guidebook provided early direction on HOW to mimic the Water Balance.

Download Parallel Journeys to a Resilient Future: Water Cycle / Water Balance Approaches in Australia and British Columbia – 2001 to 2016 and Beyond to view a PDF copy of the entire PowerPoint presentation by Kim Stephens.

Download Primer on Water Balance Methodology for Protecting Watershed Health, the fifth in a series of guidance documents that form the basis for knowledge-transfer via the Georgia Basin Inter-Regional Education Initiative (IREI). The foundation document for the series is Stormwater Planning: A Guidebook for British Columbia.

Below, the set of 10 slides from Module 2 are presented for convenience of reference when the reader views the YouTube video (14:51 minutes). 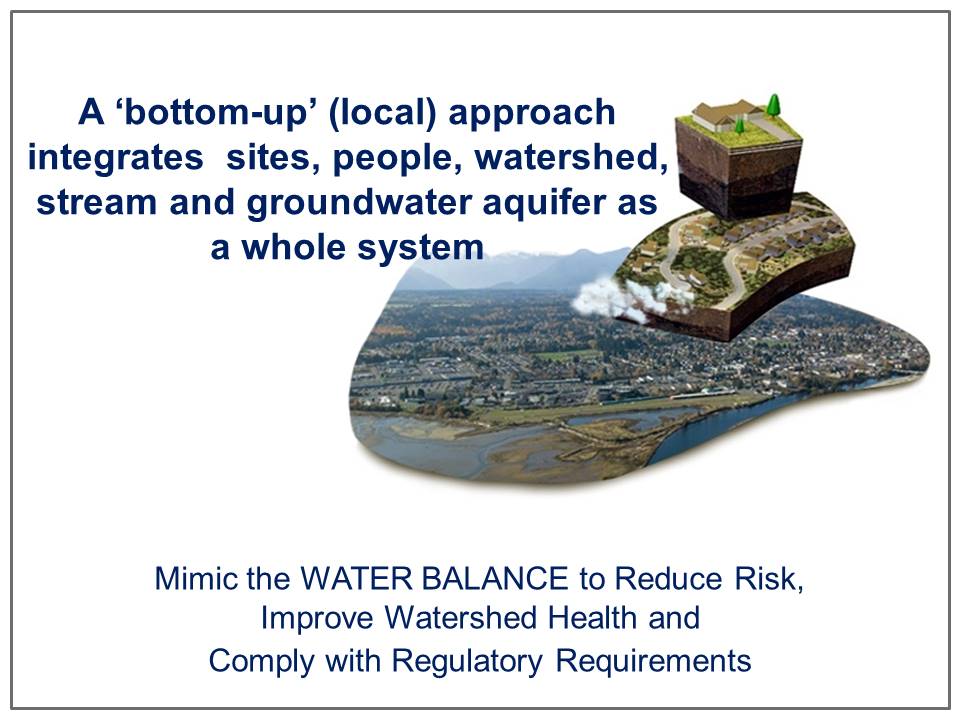