INSPIRING INNOVATION: "If British Columbia can do it, then there is no reason why we can’t do it too!," stated Karenne Jurd, City of Newcastle (Australia), when reflecting on keynote addresses by Kim Stephens in 2001 and 2016

In 2001, Kim Stephens was keynote speaker for an Urban Water Cycle Management Capacity Building Program for local governments in the Lower Hunter Valley and Central Coast region of New South Wales, Australia. Held in the harbour city of Newcastle, the event was titled Challenges and Opportunities for Water Sensitive Urban Development. It was a seminal moment for cross-pollinating Australian and British Columbia experience, and for relationship-building.

Kim Stephens is the Executive Director, Partnership for Water Sustainability in British Columbia.

Fast forward to August 2016. Fifteen years later, Kim Stephens was the opening keynote speaker at Rising to the Challenge, the biannual national conference held under the umbrella of Stormwater Australia. This flagship event attracted close to 300 delegates, one of whom was Karenne Jurd, Assistant Program Coordinator-Environment with Newcastle City Council. Karenne attended both the 2001 and 2016 events and provided the perspective below.

This can be done!

“It was terrific to catch-up with Kim Stephens at the National 2016 Urban Water Management conference. It was a blast from the past, literally, to see his name on the program …. I knew we were in for a treat with his keynote address! He certainly didn’t let me down!,” wrote Karenne Jurd.

“It was very cathartic to hear the BC story telling of success, both in policy and practice 15 years on from my first introduction to his ‘water balance’ approach to urban water cycle management.”

“I found myself thinking back on a number of occasions during his address, to the images I still hold in my mind of his 2001 Newcastle presentation – road-side swales and residential suburban development above salmon stream habitat ….  How uplifting they were!”

“His delivery presented a visceral image that confirmed ‘this can be done’!!… and if I’m honest I have to admit that I still have my copy of his PowerPoint and every couple of years I open it up, reconfirm its possible, and then save for another moment of reflection down the track.”

“In reflecting on our 2001 three day capacity building course in Newcastle, it did more than just build my capacity as a strategic natural resource planner. It fuelled my enthusiasm as an agent of change in our own 15 year journey in urban water cycle management.”

“The window into BC water management he opened showed us ‘what was possible’. It was a seminal moment in time, where I and many of my peers also still working in the water industry today, saw the on-ground successful demonstration of water innovation and knew that ‘if BC can do it, then there is no reason why we can’t do it too!’ “

“I have to add that kicking goals in managing the urban water cycle to deliver outcomes for salmon waterway health /habitat was not only inspiring … it was sexy! (as they say in the communication business).”

Nature of the Journey in Newcastle

“Our journey in Newcastle has been marked by large grant allocations demonstrating some ‘out of the box project’ initiatives, including:

“Such initiatives were followed with policy shifts and development guidelines that now provide a solid foundation for managing our city’s growing footprint.” 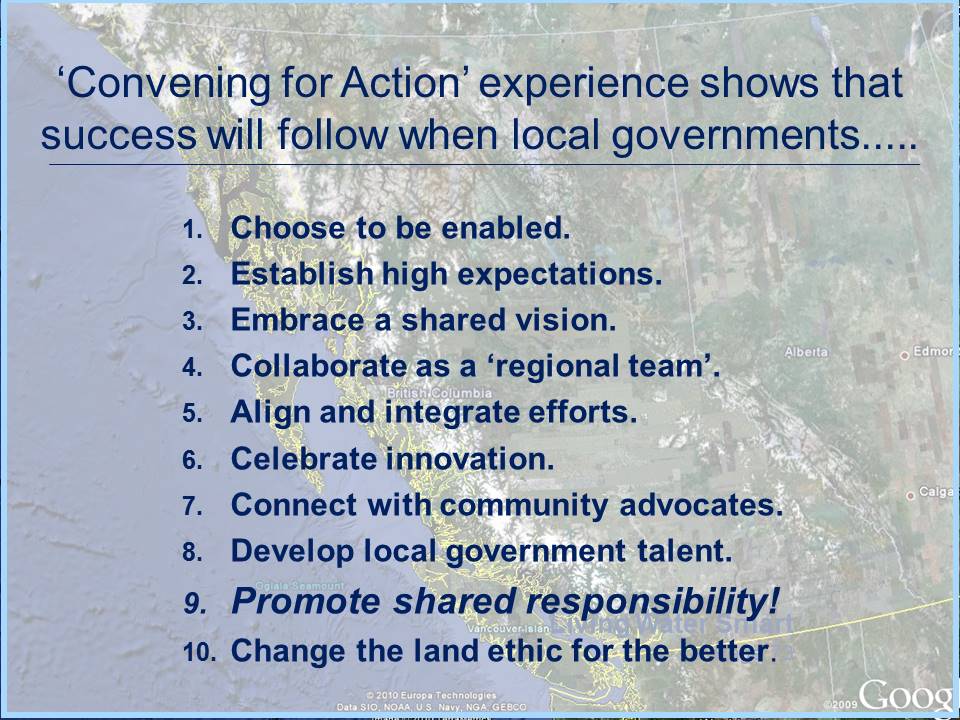 “Whilst our journeys have reflected our continental differences, they also reflect the similarity in our methodologies around ‘partnerships in thought and action for the common good’. This seems to me to be a cornerstone of all our success stories.”

“It also seems to echo the sentiment his keynote address wrapped up in the ’10 commandments’ for local government success in creating the water ethic we all need to sustain our communities!”

“Thanks again for the memories, inspiration and time at the conference banquet. It was indeed a champagne moment for me!,” concluded Karenne Jurd.

Download KEYNOTE ABSTRACT for an overview of the “BC story” that Kim Stephens shared at Stormwater 2016: Rising to the Challenge.

Download POWERPOINT PRESENTATION to view the 45 slides comprising the storyline for the keynote address by Kim Stephens. Watch his presentation on YouTube:

Hosted by the Lower Hunter & Central Coast Environmental Management Strategy, the March 2001 training session was the second in a series of programs and activities on water cycle management in the Hunter Valley. Over a 2-day period, Kim Stephens delivered three presentations, including both an opening call to action and closing reflections.

Watch the YouTube video of the first of three presentations by Kim Stephens at the 2001 capacity-building workshop: