OP-ED: "Water wise: Where have all the coho gone?" asks Tanis Gower

The opinion piece below was contributed by Tanis Gower. It was also published in the Comox Valley Record newspaper. Tanis Gower is a registered professional biologist from the Comox Valley who has been working to restore aquatic ecosystems and advocate for good water policies for the last 20 years. Prior to returning to the Comox Valley, she was the Coordinator for the precedent-setting Bowker Creek Initiative in the Capital Region.

In her Op-Ed, Tanis Gower provides a perspective on what Daniel Pauly’s “Shifting Baseline Syndrome” looks like on the ground in the Comox Valley.

A Personal Perspective on the Shifting Baseline

“I was born in Comox in the early ’70s, and my dad had a small boat that he used to catch our dinner,” wrote Tanis Gower, “Coho salmon returned to spawn in many small streams nearby, and people like my dad caught coho in amounts that would last all year. We can be sure that coho fishing has been sustaining people here for a very long time, as evidenced by the ancient

and sophisticated salmon traps that can still be seen across the K’omox estuary today.”

“Now there is very little commercial fishing for coho in B.C., and much of the limited recreational catch here on the east coast of Vancouver Island is focused on hatchery fish.”

“So where have all the wild coho gone?”

Shifting Baseline Syndrome refers to a gradual change in the accepted norm for ecological conditions. Download Creating the Future in British Columbia: Recognize and Address the “Shifting Baseline”.

Daniel Pauly, French-born marine biologist and professor at the University of British Columbia, is well-known for his work in studying impacts on global fisheries. In 1995, he coined the phrase SHIFTING BASELINE SYNDROME to describe his observation that:

“Each generation of fisheries scientists accepts as a baseline that the stock size and species composition that occurred at the beginning of their careers, and uses this to evaluate changes…The result obviously is a gradual shift of the baseline…and inappropriate reference points.”

The phrase describes an incremental eroding of standards that results with each new generation lacking knowledge of the historical, and presumably more natural, condition of the environment. Over time, and in the absence of a ‘teachable moment’ to raise awareness of a change, the result is that standards are lowered almost imperceptibly.

Where have the Wild Coho Gone?

“This is a great question,” continues Tanis Gower. “The answer is complicated, and it’s not just about over-fishing or changing ocean conditions. Of all the salmon species, coho spend the longest in freshwater streams. Coho eggs are laid down in the late fall or early winter, and the fry emerge from the gravel in the spring. They spend the next year growing, and migrate to sea the following spring. Because of this life cycle, coho juveniles are found in all our healthy coastal streams year-round, and in many unhealthy creeks and streams as well.”

“Without even discussing the challenges of ocean life in a changing climate – or the unanticipated problems wrought by hatcheries – it is easy to see that changes to small streams are not beneficial to coho salmon. This is one reason coho haven’t been doing so well.”

“For example, my local stream, Piercy Creek, runs through the flats of West Courtenay, through wet forests and wetlands, and now beside residential subdivisions like mine. Like most developments, my neighbourhood had drainage installed to make sure our basements would stay dry.”

“This is completely normal and necessary, yet on a cumulative scale it destroys our small streams.”

“Stormwater management is what this process is called. Surrounding Piercy Creek and urban creeks everywhere, an underground network of pipes drains water from the landscape, and delivers this water directly to the stream network. More water moves more quickly during wintertime, and as a result the land no longer acts like a slow-release sponge. Stewards say that Piercy Creek used to flow most of the year. Now, Piercy Creek dries up for long periods in the summer, stranding the coho fry that don’t make it downstream in time.”

“As the creek shrinks, my family watches the remaining stranded coho fry flipping in mud puddles, until the day we notice the creek bed is dry–and the former puddles are surrounded by the footprints of raccoons.”

“The bright part of this story is that small streams don’t have to be wrecked by development. We now have the understanding and the technology to do better.”

“The new paradigm is called “rainwater management,” which recognizes that rain is a resource to be stewarded, not just drained off as quickly as possible. Rain gardens are one of the more visible features, while less visible measures like thicker topsoil are also very important. Implementation is piecemeal, but decades of advocacy by stream stewards is finally paying off.”

“In our Valley, the Town of Comox is positioning itself as a leader. The Town doesn’t have much choice, as its Official Community Plan includes in-fill housing for Northeast Comox. This area has high-profile problems with urban runoff and flooding into Queen’s Ditch, and any development here must leave runoff unchanged, or risk legal action. Over the past few years the landowners and their consultants have been completing studies for this sensitive area. The final phase is due this year.”

“Everyone interested in healthy streams—and against nuisance flooding—will be watching. We can be sure the coho salmon will be watching too,” concludes Tanis Gower. 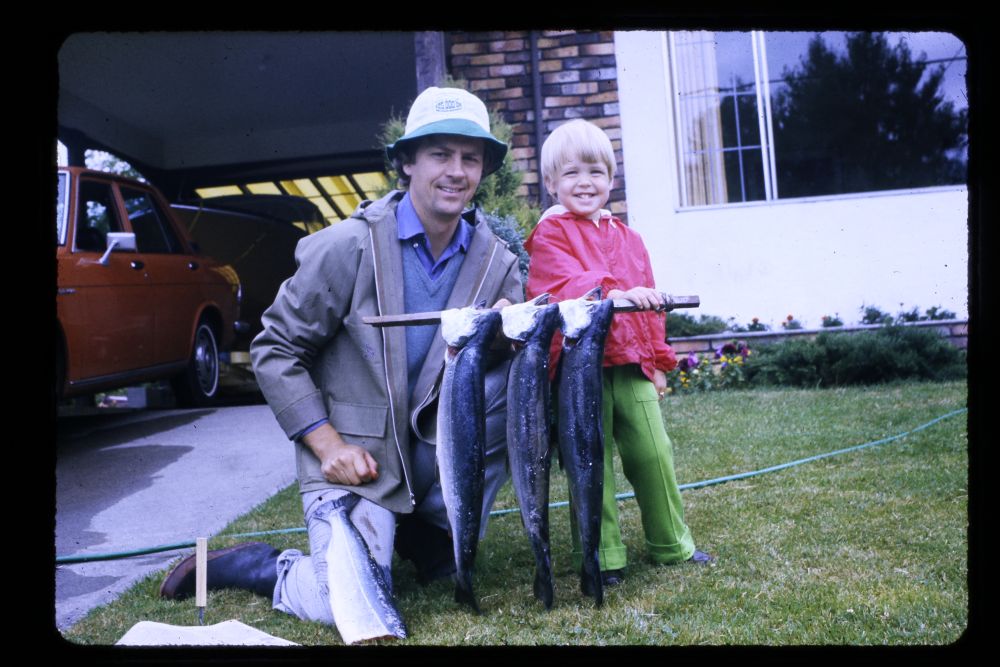 Circa 1974 – Tanis Gower with her father after fishing for coho