Think and Act like a Watershed (Part 2): Get the hydrology right and residential water quality typically follows along

This is a 4-part series. Part 1 introduced new ecosystem-based adaptation (EbA) research in BC that may inspire a new generation to “think and act like a watershed”. In Part 2 below, we celebrate the 20th anniversary of publication of the seminal research by Richard Horner and Chris May.

Part 3 will showcase the results of recent rain garden research by Jennifer McIntyre at Washington State University. Part 4 will conclude with the parallel journeys of Washington State and British Columbia and how the Water Balance Methodology is the foundation for an ecosystem-based approach to protection of hydrologic integrity, and hence creek system resilience.

2nd in a series connecting past and present research

In 1996, Richard Horner and Chris May (University of Washington) published their seminal research on the cumulative impacts of land use change on stream health. Their findings shook conventional stormwater management wisdom in the Pacific Northwest to its very foundation. The legacy of Horner & May resides in their science-based ranking of four limiting factors.

In British Columbia, science-based understanding has been translated into a road map for science-based action to restore watershed health. The work of Horner & May is integrated into Stormwater Planning: A Guidebook for British Columbia and drives the Water Balance Methodology. With release of Beyond the Guidebook 2015, the Horner & May legacy is once again at the forefront.

Historical Context for “Get the Hydrology Right”

In the 1990s, Kim Stephens and Bill Derry (Washington State) led a workshop program for BC local government, and provided cross-border sharing of the latest research.

In the 1980s, Bill Derry was one of the first stormwater utility managers in Washington State. Because he believed strongly in the need for scientifically-defensible research, Bill Derry convinced his fellow utility managers to fund a university-based research centre, founded by Rich Horner at the University of Washington in 1990. 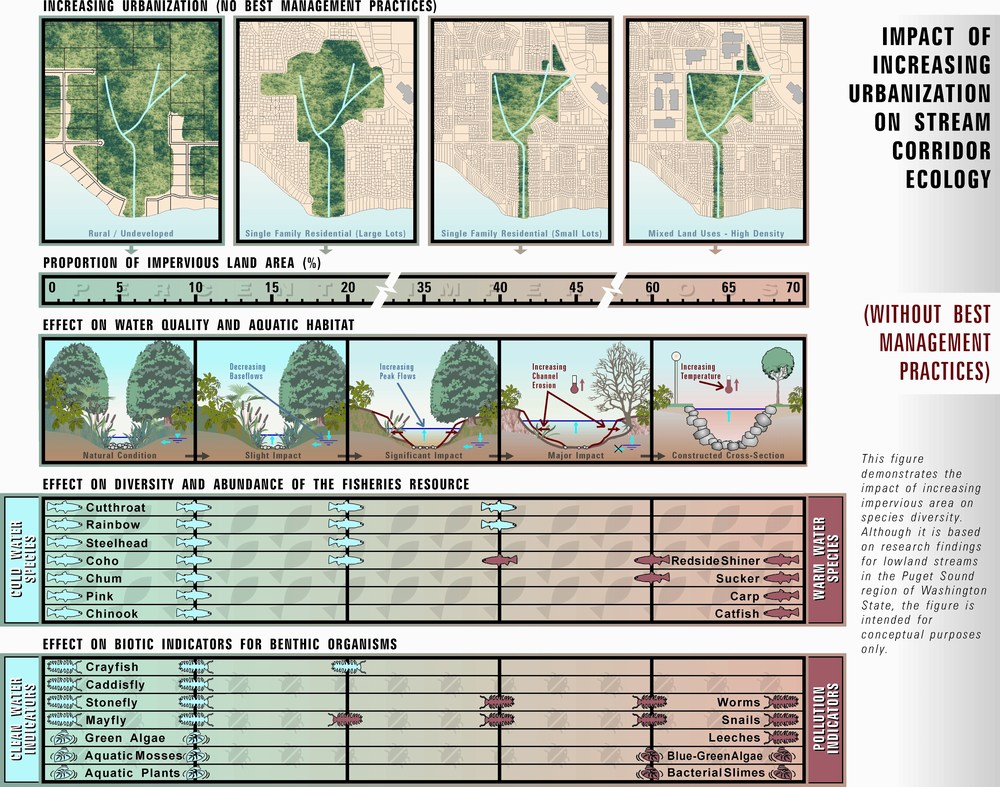 “Early access to the Horner & May findings allowed us to create what became known as the ‘fish pictures’. These graphics translated the science, served as education and communication tools to create a common understanding, and informed decision-making by municipal, regional and provincial governments in BC,” explains Kim Stephens, Executive Director, Partnership for Water Partnership in BC.

“The workshops fueled interest in the ecosystem-based approach. This resulted in the SmartStorm Forum Series, four transformational events held between January 1999 and March 2001. The Stormwater Guidebook was an outcome.”

To Learn More: Read Historical Importance of SmartStorm Forums (1999-2001): Series was the Catalyst for Looking at Rainfall Differently in British Columbia

The Test of Time:

“Released in November 2015, Beyond the Guidebook 2015 has set the stage for BC moving towards Sustainable Watershed Systems, through Asset Management. This would be our next bold leap forward in the application of science-based understanding. The goal in restoring the hydrologic integrity of a watershed is to forestall an unfunded taxpayer liability flowing from ‘changes in hydrology’.”

“A cornerstone of this approach is the legacy work of Horner & May. Two decades on, we still celebrate their accomplishments. Their seminal work is standing the test of time.”

Understand the Watershed as a Whole System

“The research by Horner & May made it clear that stormwater (rainwater) management was as much or more about land use decisions as engineering solutions. We also learned that we needed to address transportation choices. Their work told us changes in hydrology, not water quality, must be the primary focus of our efforts. If we get the hydrology right, water quality typically follows takes care of itself in a residential development,” notes Kim Stephens.

“So many studies manipulate a single variable out of context with the whole and its many additional variables,” states Dr. Richard Horner, now a professor emeritus at the University of Washington. “We, on the other hand, investigated whole systems in place, tying together measures of the landscape, stream habitat, and aquatic life.”

“Unless and until land development practices mimic the natural water balance, communities cannot expect to restore the biological communities within streams. Simply put, hydrology hits first and hardest – one could pour an equivalent volume of distilled water into a stream, and the consequences for stream health would be the same as if it was urban runoff.”

“When the goal of land servicing practices is pre-settlement hydrology, however, this reduces the quantity of urban runoff discharged into a stream. It also improves the quality of the remainder of that which is discharged. In short, mimicking the natural water balance has a dual benefit.”

The Primacy of Hydrology:

“When I look back 20 years, and reflect on how we saw things at the time, I offer this hindsight: the significance of our research findings was in gaining recognition of the primacy of hydrology. Until then, it was all about water quality.”

“We were not the first researchers to realize that hydrology is the controlling factor. Around 1981 there was a project at the University of Washington that should get credit for being first. That project got it going. We then built on that early research and moved the subject along.”

“My personal realization of the primacy of hydrology started with my wetlands research in the 1980s. I started with a water quality focus in Pennsylvania but soon learned my ‘hydrological lesson’ when I moved to Puget Sound. With this background, it was not a big leap to come to the same realization once I turned my attention to stream work.”

How the Pacific Northwest Compares with Other Regions:

“The understanding that hydrology is THE controlling factor for stream health is well-set in the Pacific Northwest, but that is not the case in the rest of the United States. My observation is that we are still far ahead of anyone else in the United States. Concepts that  are well-set in Washington State are just not appreciated elsewhere.”

“One such concept is flow duration analysis. This is the proper way of managing hydrology,” concludes Richard Horner. “Washington State institutionalized it in 2012 when the Department of Ecology updated the Western Washington Stormwater Manual.”

“The key to the Whole Systems approach is understanding how rainfall reaches a stream via three flow paths in a watershed – surface runoff, lateral interflow in shallow soils, and deep groundwater. Unlock that key and we can successfully

Twenty years later, he is Surface & Stormwater Division Director with Kitsap County Public Works in Washington State. His local government work has allowed him to put theory into practice.

“At Kitsap County we have applied this Whole Systems concept to develop our strategy for watershed retrofit and rehabilitation – it is not sufficient to do only a single (or even a few) things – it is necessary to do everything! We know we need to work at multiple scales and multiple levels to improve conditions in our small stream watersheds – that’s our strategy. Kitsap is at a manageable scale. The County is big enough to effect change and make things better. That is our goal – have a positive impact on the community!”

“The damage is at multiple scales. Therefore, repair and restoration must also be at multiples scales, and at multiple levels. We cannot do just one thing and expect change. We must retrofit old development. We must also do riparian, in-stream and floodplain restoration as well.”

“A Seattle experience provides a perspective. The City built it (stream restoration), the coho salmon came, the salmon died. They learned that there is more to restoration than in-stream restoration. This realization led to research and discovery of something called Pre-Spawn Mortality (PSM) which is caused by road runoff. This is a phenomenon where adult coho salmon die before spawning when returning to freshwater streams to spawn.”

“This occurrence has been observed in much of the Puget Sound region. The research has been in progress for the past decade. While PSM appears to be a water quality effect, the research cannot pin it down. As Rich Horner has observed, it is the urban cocktail that kills the salmon.”

“Jenifer McIntyre at Washington State University has extended the research by taking highway runoff and demonstrating that rain gardens eliminate toxicity. This dual benefit rounds out the case for retrofitting rain gardens to mimic the natural Water Balance. Water quality is not the culprit until a watershed is well up the development scale. Physical impacts of a changing landscape is THE issue. Then riparian, in-stream and water quality – in that order.” 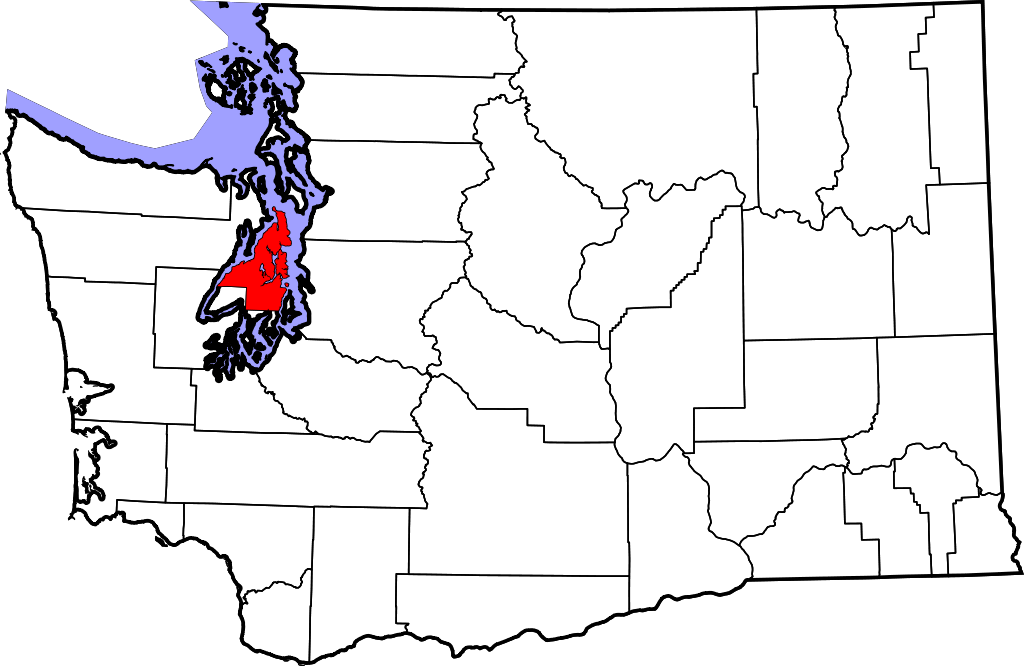 Kitsap County is a Living Laboratory:

“Can we view Kitsap County as a living laboratory? Yes, it is one big experiment. There are many questions and few answers. Questions such as how much do we have to retrofit, and do we need to disconnect every bit of impervious area?”

“There are few opportunities to do a controlled experiment in the built environment. Kitsap has implemented many facilities and features to better manage hydrology. We have ponds. We have green streets. But it is too early to state how much they actually do.”

“Kitsap County has an active Watershed Health Monitoring Program that includes streamflow, B-IBI (benthic integrity), water quality and other parameters. This monitoring will hopefully quantify the positive impacts of our cumulative actions, but it will take time.”

“Now it is a matter of wait and see in order to be able to show the positive effects of the retrofit program. Everyone wants instant gratification, but realizing the benefits takes time. It took 100 years to get here. It will take 100 years to turn the situation around. The initial signs are good. The monitoring shows that Kitsap County may be ‘holding the line’ in areas where development is occurring,” concludes Chris May.

Download Beyond the Guidebook 2015: Moving Towards “Sustainable Watershed Systems, through Asset Management”

Also, the most complete reference to all stream research undertaken by Richard Horner and Chris May is their final report to the United States Environmental Protection Agency, published in 2004. Click on:

And finally, for an historical perspective on implementation of the hydrology-based framework in BC, download Rainwater Management in a Watershed Context – What’s the Goal? 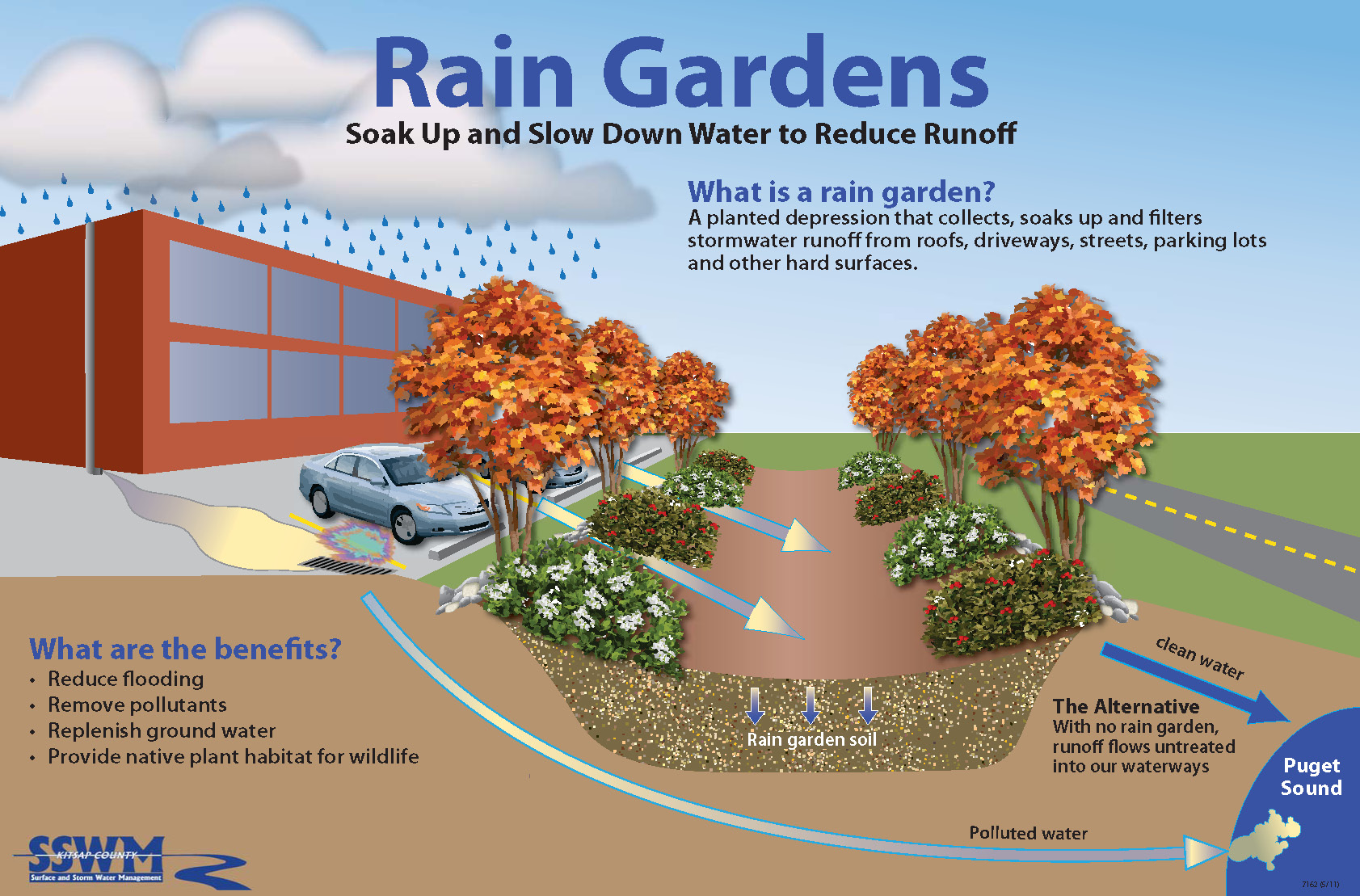