The Inter-Governmental Partnership held a Water Balance Model Partners Forum in March 2007 so that Partners could share success stories and lessons learned in implementing green infrastructure.

Development of the Water Balance Methodology for establishing Performance Targets has facilitated implementation of an Integrated Strategy for managing the complete rainfall spectrum. 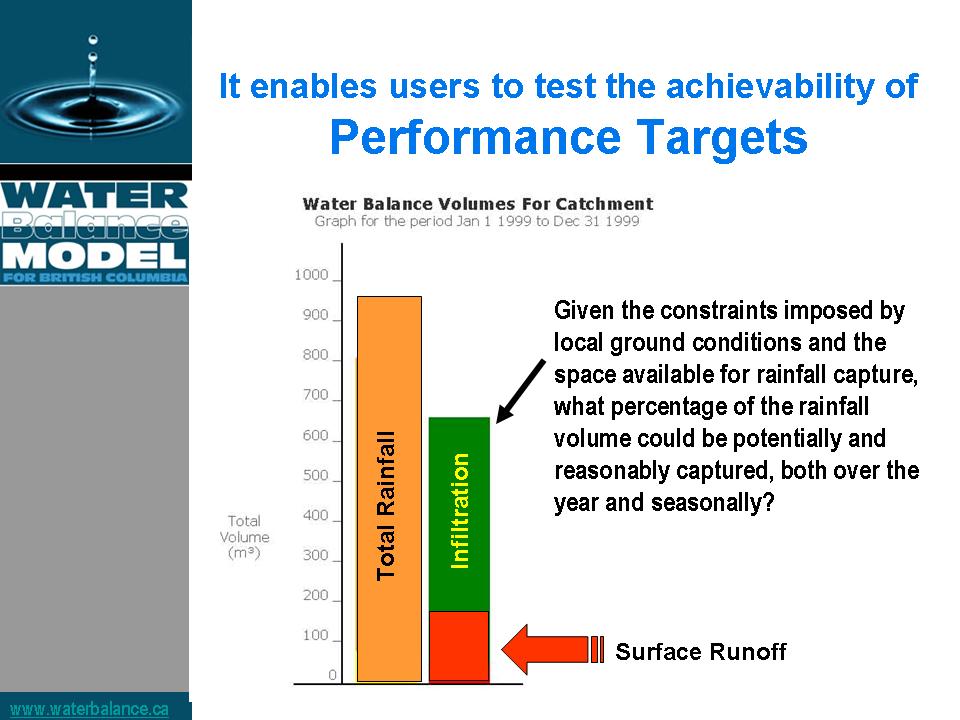 As explained by Peter Law of the Ministry of Environment, “When we wrote the Guidebook, we recognized there is a material difference in the characterization of surface runoff that originates from an individual development site versus flow that

you see at a catchment or watershed scale. What you see in a watercourse is the total flow – that is, water that flows overland plus water that moves through soil until it daylights. This is one reason why Chapter 6 in the Guidebook emphasizes the need for flexibility in setting performance targets, and states that performance targets should be customized for individual watersheds and catchments, based on what is effective and affordable in the context of watershed-specific conditions.”

The output from the current version of the Water Balance Model is ‘surface runoff’, whereas the output from the Water Balance Model powered by QUALHYMO will be ‘total flow’.  This expanded capability is a key to determining what level of rainfall capture may be effective and affordable. “It is important for everyone to keep in mind that the application of a performance target approach is essentially about due diligence and doing the right things to capture rain where it falls. The performance target approach is intended to be the exact opposite of a prescriptive approach. The latter is counter-productive when it leads to rigid standards that have the effect of inhibiting creativity and innovation”, added Peter Law.

Defining rainfall tiers enabled a systematic approach to data processing and identification of rainfall patterns, distributions and frequencies. Establishing the Mean Annual Rainfall (MAR) as a reference point provided a convenient way to divide the total number of rainfall-days per year into three groupings. The relevance of the MAR is simply that it established a starting point for assessing the achievability of rainfall capture.   In 2002, focussing on the MAR facilitated a paradigm-shift in the state-of-the-practice because it demonstrated that rainfall capturewas achievable: the number of rainfall-days up to and including the MAR equated to 90% of the total annual rainfall volume.

According to Ted van der Gulik, IGP Chair, “The Inter-Governmental Partnership envisions the next paradigm-shift in the state-of-the-practice will revolve around the way we relate runoff volume management to stream erosion and water quality.

Volume is something that local government has control over, and it is measurable. We have observed that the power of the Water Balance Model process lies in the conversations that result from users generating a single number – the percentage of rainfall that becomes runoff – that represents the synthesis of any particular scenario. Comparison of scenarios creates understanding, especially when the focus is on the hydrologic implications of the assumptions that underpin those percentages.”

“Several qualitative indicators can be utilized in assessing the potential for erosion or sediment accumulation within a watershed”, elaborated Jim Dumont, the Partnership’s Engineering Applications Authority, “The methodology selected for the Water Balance Model powered by QUALHYMO is based upon shear stress as applied to the stream banks over time. This is a measure of the energy available to cause erosion in a stream. Continuous simulation is the key to generating scenario comparisons. ”