The genesis for inter-regional collaboration among ‘convening for action’ champions from Metro Vancouver and the east coast of Vancouver Island is found in three successive initiatives, dating back to 1990, that advanced an ecosystems approach:

In 2000, Canada and the United States signed a Joint Statement of Cooperation on the Georgia Basin and Puget Sound Ecosystem – to maintain sustainable ecosystems and communities in the face of continuing population and economic growth. It outlined common goals and objectives, reinforced the benefits of ‘decades of collaborative activity’, and recognized contributions then being made by the Metro Vancouver region.

This long history provides context for, and insights into, understanding the origins of the ecosystem-based approach that underpins the current Georgia Basin IREI.

The Salish Sea ecosystem, which includes the Georgia Strait, the Strait of Juan de Fuca, and Puget Sound in Washington State, is of significant importance in North America as one of the richest in biodiversity.

Experience gained in the Metro Vancouver region during the period 1997-2003 informed and influenced the Water Sustainability Action Plan for British Columbia (2004), notably five of the six original plan elements.

The centrepiece of the Action Plan, the Water Balance Model (WBM), began as an initiative of the Metro Vancouver Stormwater Interagency Liaison Group (SILG). As an early demonstration of the value of the ‘regional team approach’, the WBM established credibility for related initiatives.

“The Convening for Action in Metro Vancouver initiative was launched through the Green Infrastructure Partnership, with endorsement by regional elected representatives and Regional Engineers Advisory Committee, in 2005,” reports Ray Fung, former Chair (2008-2010) of the Green Infrastructure Partnership. He is the Director of Engineering and Transportation with the District of West Vancouver.

“Metro Vancouver experience then informed implementation of the Vancouver Island program (commencing in 2007). For the past decade, cross-pollination of ideas and approaches has been ongoing among local government leaders. Vancouver Island champions are proving out concepts initially identified by ‘convening for action’ in Metro Vancouver.”

The Metro Vancouver chapter in Beyond the Guidebook 2015 is 27 pages and is organized in six sections as shown below. To download a PDF copy and read the complete story, click on Convening for Action in Metro Vancouver. 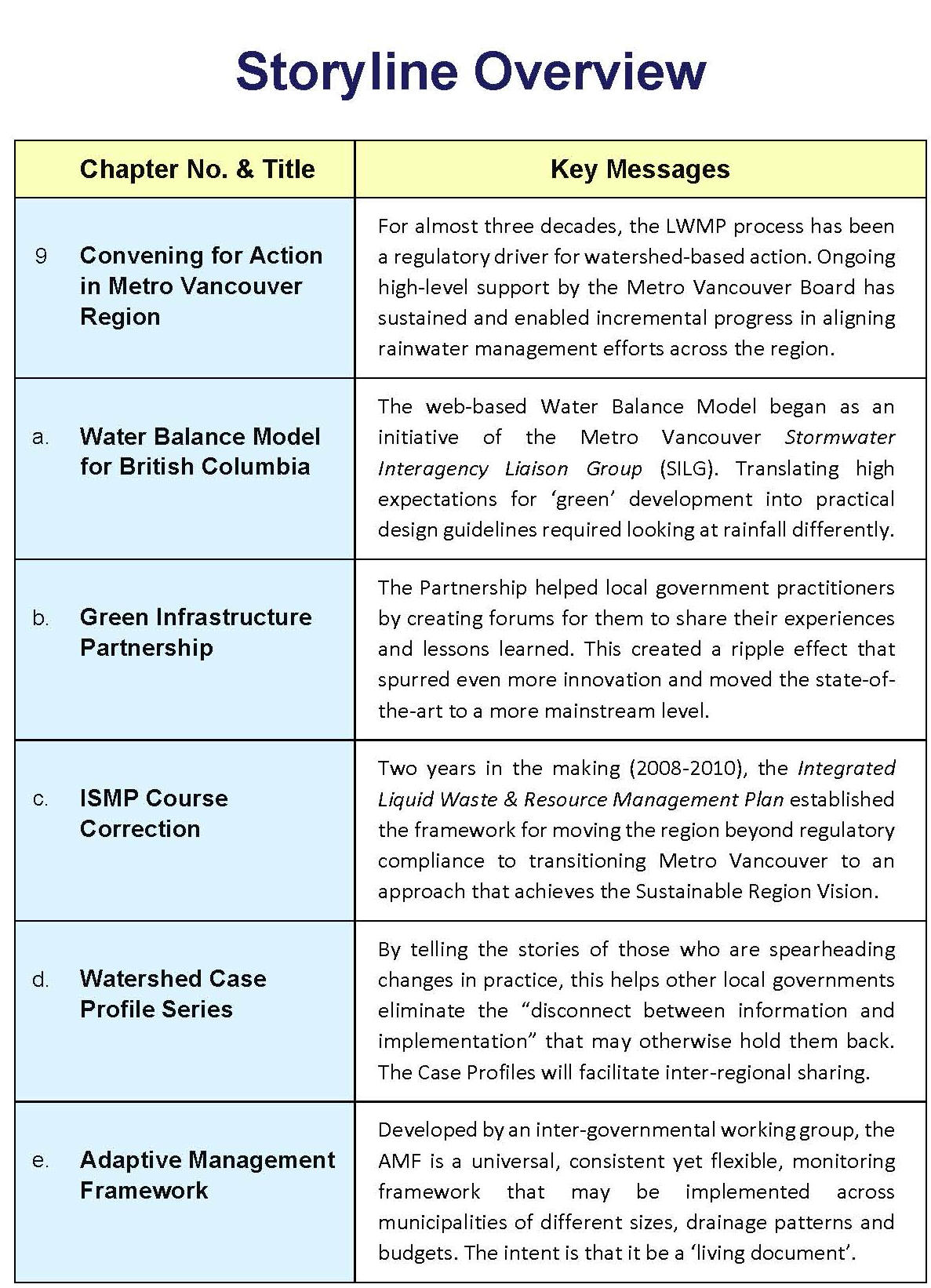