News from the United States: First continent-wide watershed research study quantifies the connections between land use and climate to the runoff process and flooding at a larger scale than was available before

The first continent-wide, multi-factor analysis of climate and land cover effects on watersheds in the United States, published in September 2015, provides a broad new assessment of runoff, flooding and storm water management options for use by such professionals as land use and town planners and water quality managers. Reproduced below is the announcement by researchers at the University of Massachusetts Amherst.

This research supports the direction in which British Columbia has been moving since 2002 when the Province adopted the Water Balance Methodology and released Stormwater Management: A Guidebook for British Columbia. A systems approach to watershed health and protection recognizes that actions on the land have consequences for the three pathways to streams and hence the Water Balance of the watershed. Those consequences are felt in both dry weather and wet weather – too much or too little water, respectively. 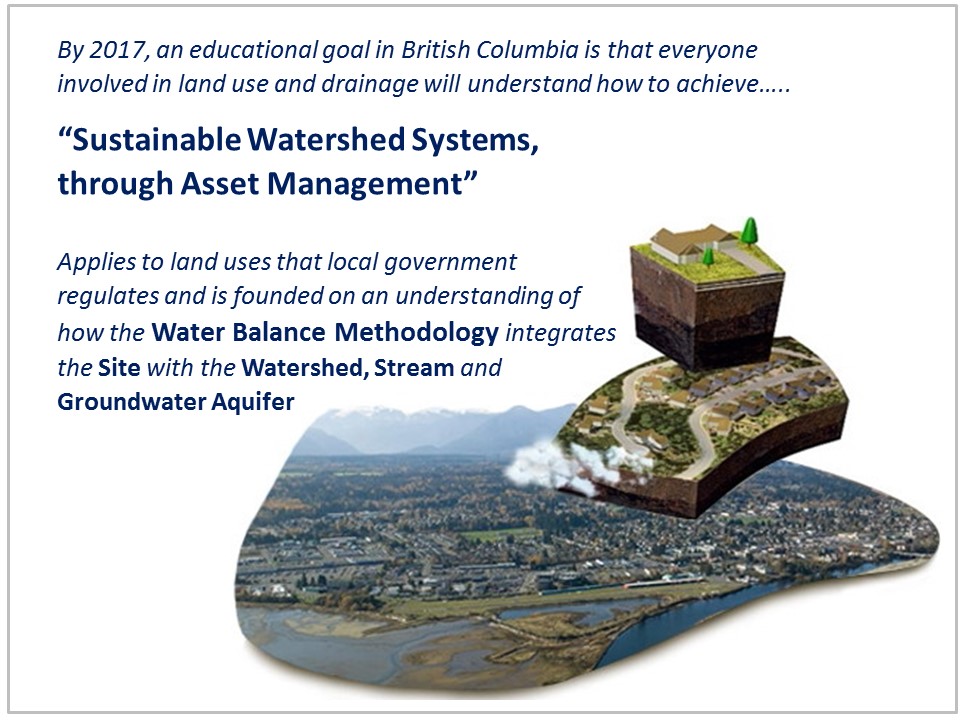 Watershed scientist Timothy Randhir and his doctoral student Paul Ekness in the department of environmental conservation at the University of Massachusetts Amherst hope their new multivariate simulation and statistical models at the watershed system level will give managers some practical ideas on new incentives to get developers to include water quality, green infrastructure and conservation plans in their projects. They also want to encourage a new awareness of the need for cities and towns to cooperate when considering new development.

The study quantifies the connections between land use and climate, that is temperature and precipitation, to the runoff process and flooding in a watershed system at a larger scale than was available before. Details appear in theJournal of Geophysical Research: Biogeosciences.

Randhir says this assessment of data from satellite imagery, field stations, water flow observations, temperature and stream gauges over the entire United States will generate new information about mechanisms and processes and will lead to a better understanding of the runoff process in large systems. 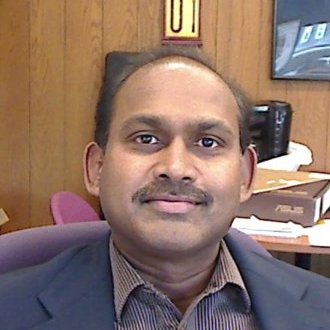 He adds, “We also want to highlight the importance of natural systems such as forest cover and open space when a town is considering new parking lots or shopping centers, for example. You can’t just take away such ecosystem services and expect everything to be OK. All towns now have a big problem dealing with storm water, and with climate change it’s going to get worse. In the past, the problems just flowed away to become some other town’s problem, but that isn’t going to work anymore.”

From Reactive to Proactive, Where Rain Falls

The watershed researcher says he hopes a new approach to water resource management will emerge so that towns and managers shift from dealing with storm and runoff problems after the fact, to looking at preventive, source-level solutions.

“There seems to be a better understanding now that water flowing away from you doesn’t just disappear, it affects someone else, and a problem in the system above you will affect you. This kind of systems thinking has to take over, and cooperation has to be used more often,” Randhir says.

His paper makes very specific recommendations on how to use such tools as urban forestry or increasing infiltration to mitigate flooding. The researchers ran models to quantify relationships between different land uses and conditions including urban forestry, agriculture, stream networks, soil types, temperature, precipitation and human interventions such as dams and parking lots.

A Focus on Green Infrastructure and Resiliency

“We propose the increased use of green infrastructure and best management practices to enhance the resilience of the watershed system,” Randhir says. For example, cities and towns should now offer incentives for their own and private developments to change practices when building facilities that increase impervious cover, for example a parking lot. Plans should include practices like pervious pavement that lets rainwater seep through and not run off, plus rain gardens or retention basins that capture hot, dirty runoff from asphalt to capture sediments, oil, grease and heavy metals.

Other incentives could reward private landowners and farmers for mitigating runoff at the source and not just ignoring it, he adds. “Right now this is not built into anyone’s thinking, but we also suggest that cities and towns move away from using only site-specific approaches that fix a local problem and a shift toward a system-wide approach. We hope towns and cities can use this information to change their land use practices.”

This work was supported by the U.S. Department of Agriculture’s National Institute for Food and Agriculture.

To access the article published in the Journal of Geophysical Research, click on Effect of climate and land cover changes on watershed runoff: A multivariate assessment for storm water management

For those who are curious about the scientific and engineering foundation for British Columbia’s Water Balance approach, click on Primer on Water Balance Methodology for Protecting Watershed Health. The Primer storyline is structured in five parts: 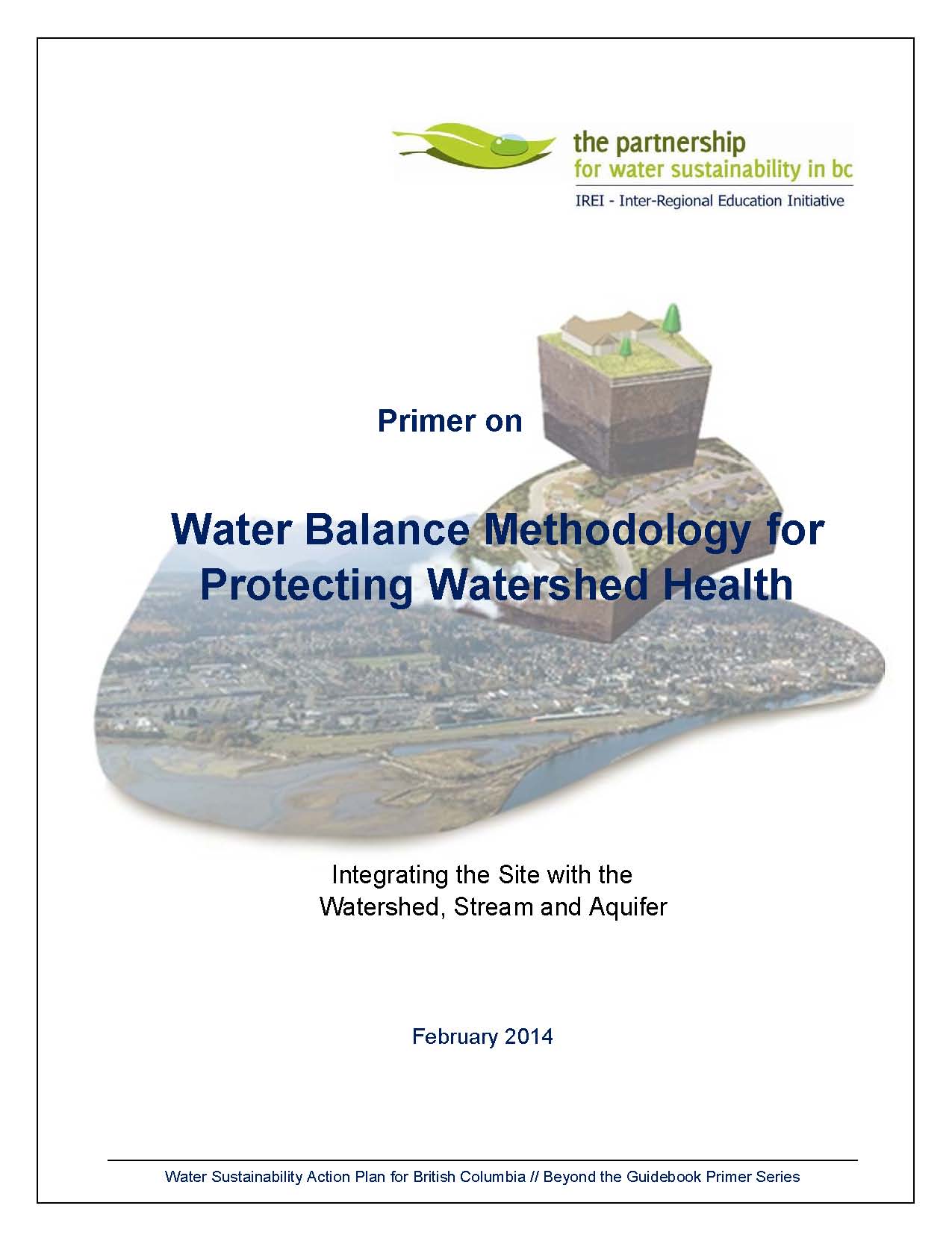