In March 2015, US Senator Patrick Leahy sponsored the 2nd biennial Leahy Environmental Summit in Burlington, Vermont. Senator Leahy is the longest serving member (40 years) and dean of the United States Senate. His vision for this ‘convening for action’ event is that it will inspire social and structural resiliency for flooding and stormwater issues related to climate change.

“The goal of the 2015 Leahy Environmental Summit is to inspire multi­-organizational, regional teams to produce or further develop specific projects, programs, and plans that engage an enthusiastic community to address social and structural resiliency for flooding and stormwater issues related to climate change.

Given the energy in the room, it is clear that we achieved that goal,” stated Phelan Fretz, ‎Executive Director, ECHO Lake Aquarium and Science Center at the Leahy Center for Lake Champlain.

To download a copy of the Agenda for this 2-day event, click on Climate Change Resilient, Floodwater Smart

Phelan Fretz explained that 15 regional teams, consisting of over 160 great thinkers and doers from across sectors gathered on the shores of Lake Champlain to work together in true Vermont environmental tradition to create innovative solutions aimed at:

The Climate Change Resilient, Floodwater Smart initiative is based on a simple notion that when it comes to enterprise innovation and integration, there is nothing that brings out the best in human systems, faster, more consistently, and more effectively, than the power of ‘the whole’,” stated Senator Patrick Leahy. “True innovation happens when strong multi­-disciplinary groups come together, build a collaborative interchange, and explore their different points of strength.”

“The design of this Summit was not a typical conference; rather, it was a dynamic, interactive working session. Summit groups, comprised of diverse stakeholders, where all voices across the community are represented, began to design and prototype some of the projects and transform their ideas into realities,” summarized Stephen Perkins,  Director of Development and Community Relations at the Leahy Center for Lake Champlain. He was responsible for organizing the Summit.

In his presentation, Kim Stephens distilled lessons learned from British Columbia demonstration applications into a set of guiding principles. The Partnership for Water Sustainability has developed these principles from its “convening for action” experience. The principles provide the framework for an educational approach. 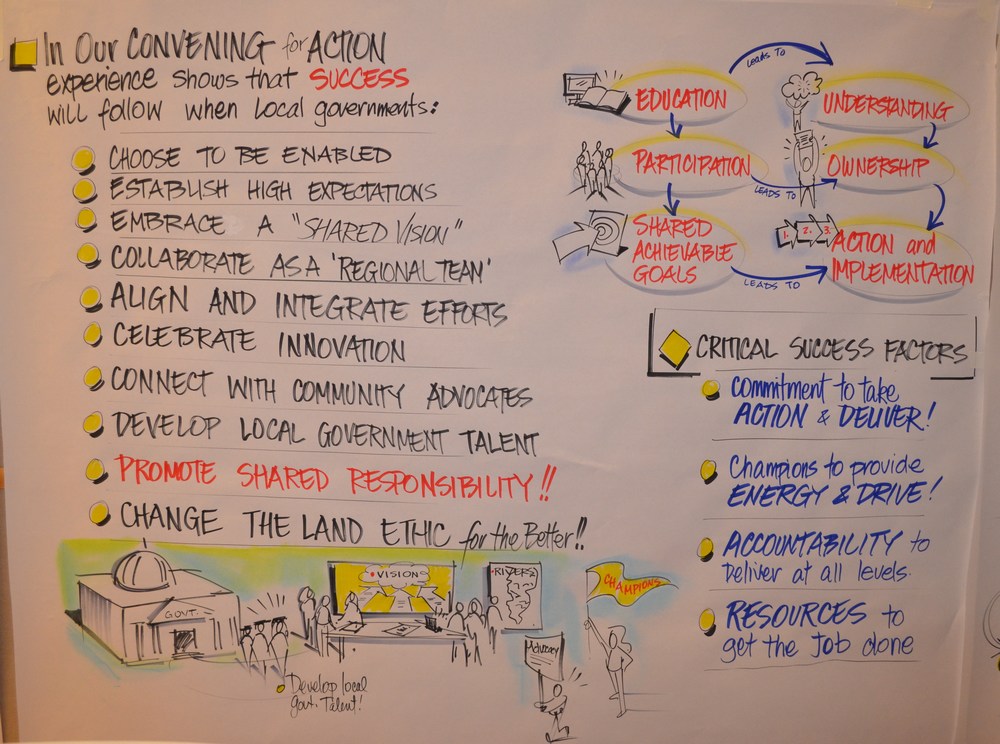 To download a PowerPoint version of the “inspirational remarks” by Kim Stephens, click on Building Resiliency in British Columbia: Integration of Natural Systems Thinking and Adaptation to a Changing Climate.

he keynote speaker for the 2015 Leahy Center Environmental Summit was Secretary of the Interior, Sally Jewell. She heads an agency that serves as steward for about 20 percent of the United States’ lands, including national parks, national wildlife refuges, and other public lands; oversees development of conventional and renewable energy supplies on public lands and waters; is the largest supplier and manager of water in the 17 Western states; and upholds trust responsibilities to the 566 federally recognized American Indian tribes and Alaska Natives.

Secretary Jewell said people in some parts of the country are still burying their heads in the sand and not preparing for the life altering changes affecting the planet. “You’re getting storms that you’ve never seen before; you’re getting winds that you’ve never seen before,” Jewell said. “We’ve got to be adapting. We’ve got to be addressing it. We can share with the public the benefit of green infrastructure.”

To read media coverage of the event, click on the links below:

US Interior Secretary thanks Vermonters for climate prep