Leading Change in BC: 10 years ago, the late Don Moore showcased a vision for green infrastructure at the “Let It Rain Conference”

The late Don Moore (1959-2008) was a commonsense practitioner; he was not captive to terminology. Part of his legacy is being the catalyst for looking at drainage differently in 2004. Don Moore was also responsible for constructing the first ‘engineered rain garden’ in British Columbia.

In 2005, Don Moore had a vision for making green infrastructure the ‘new business as usual’. He seized the moment and partnered with Dr. Val Schaefer of the Douglas College Institute of Urban Ecology to organize the “Let It Rain Conference”. At the time, Don Moore was Manager of Environment with the Wesbild Corporation, developer of the Westwood Plateau community in the City of Coquitlam, BC. That community is home to over 15,000 residents.

To learn more about the life and times of Don Moore, click on In Memoriam to read the tribute published in 2008 by Watermark Magazine, the journal of the British Columbia Water & Waste Association. 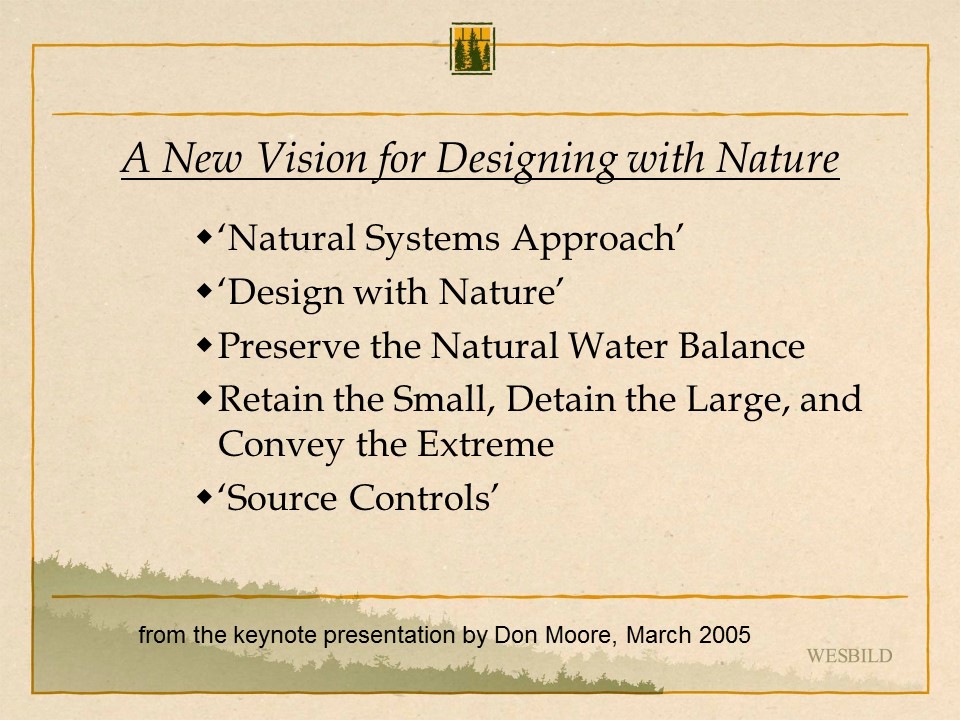 Co-funded by Wesbild and the Vancouver Foundation, and held in New Westminster, the conference theme was: how to keep rainwater out of the pipes and get it back into the ground where it falls.

Don Moore explained the background on Wesbild corporate sponsorship as follows: “We are working towards building a community on Burke Mountain that has an innovative and leading edge approach to rainwater management. The ‘Let it Rain’ conference is an opportunity for all of us to learn from our peers to help us better complement nature and not replace it.”

“Our goal was to fill the room, and we did. The room capacity at Douglas Collegewas 125 and almost every seat was filled. The turnout was a direct demonstration of the interest in this emerging area of practice. The registrants included many municipal staff, GVRD, provincial government, and DFO staff, landscape architects, planners, contractors, and members of several NGOs.”

“Don’s hallmark at this stage in his career were his ‘green infrastructure’ initiatives, which he enthusiastically promoted at each of his development sites, including Turtle Mountain (Vernon) and Burke Mountain (Coquitlam),” recalls David Desrochers, his longtime friend and former colleague at the City of Vancouver.

The Complete Set of Presentations

To download PDF copies of the 10 individual presentations that comprised the conference program, click on the links below:

Kim Stephens (Water Sustainability Action Plan for BC): The Water Balance Model: A Tool for ‘Designing with Nature’

A Natural Systems Approach to Stormwater Management: A New Vision for ‘Designing with Nature’

“A new community is emerging in northeast Coquitlam at Burke Mountain. A key feature of planned development at Burke Mountain is a low impact, ‘natural systems approach’ to stormwater management,” wrote Don Moore in 2004.

“As a major land owner in the area Wesbild is committed to utilizing sustainable, best management, stormwater practices in the development of its land. Wesbild’s approach will embrace evolving Low Impact Development (LID) strategies, a ‘design with nature’ philosophy, to create a greener community and achieve a sustainable interface for stream protection.”

“The stormwater management methods will strive to preserve the natural water balance.  In simple terms this means designing to get stormwater into the ground and to keep it out of the pipes,” continued Don Moore.

“To support this objective, Wesbild has developed a manual that will serve as both a policy statement and a practical guide.  Our goal is to integrate practical strategies to naturally balance rainwater volume and reduce runoff from our developed land.”

To download a copy of the Wesbild manual, click on A Natural Systems Approach to Stormwater Management: Implementing Low Impact Development at Burke Mountain, released in 2004. The manual was a collaborative effort on the part of Don Moore and Kim Stephens.

The natural approach provided a framework of practical stormwater management solutions for Burke Mountain. Don Moore’s vision was that this would add depth to the City’s Hyde Creek Integrated Watershed Management Plan.

A ‘Don Moore Moment’ at the Let It Rain Conference

Paul Cipywnyk, President of the Byrne Creek Streamkeepers Society, captured a ‘Don Moore moment’ when he wrote the following in his blog: “Oh, one neat idea that popped up was no longer talking about ‘stormwater management’ but shifting to ‘rainwater management.’ Don Moore said that MS Word always flagged

About the Paradigm-Shift to ‘RAINwater’

“Don Moore was the catalyst for inspiring us to look at things differently,” recalls Kim Stephens, Executive Director for the Partnership for Water

“It was late 2003 and early 2004 when Don and I co-authored the guidance document for Wesbild about designing with nature on Burke Mountain. I remember it as though it was only yesterday when Don looked at me quizzically and asked: Why do we say stormwater management; shouldn’t it be RAINwater management?”

“Don Moore was also responsible for constructing the first ‘engineered rain garden’ in British Columbia. This was built at the Wesbild offices on the Westwood Plateau at the end of 2004,” continues Kim Stephens.

“We describe it as ‘the first engineered’ because it was constructed in accordance with design guidelines developed for Metro Vancouver. Don came up with a practical way to monitor the performance of the rain garden, thereby providing some of the earliest data on the effectiveness of landscape-based measures for rainfall capture. He presented his findings at the Let It Rain Conference.”