Watershed-Based Approach and ‘ISMPs’ in the Corporation of Delta

In 2001, Metro Vancouver and its member municipalities recognized the benefits of a watershed-based approach to integrating drainage, ecology and land use planning.

The region made a commitment to the Province to have watershed-based plans in place by 2014. This commitment is a requirement in the region’s Integrated Liquid Waste & Resource Management Plan, approved by the Hon. Terry Lake, Minister of Environment, in May 2011.

Delta is home to a population of approximately 100,000 people in the Metro Vancouver region of British Columbia. Delta comprises three distinct urban communities (North Delta, Ladner and Tsawwassen) within an agricultural sea.

Delta has some 500 kilometres of roadways. The corporate vision is to enhance community liveability by beautifying streets, one block at a time. In 2005, the municipality embarked upon a long-term initiative to incrementally improve the urban landscape though a streetscape program that embodies three objectives:

Delta’s story is a case study illustration of how a “design with nature” ethic has taken root in local government in British Columbia.

A focus on Streetscape Enhancement because….

“Our urban areas are built out. This reality means there are limited opportunities for slowing, spreading and sinking rainwater. We are effectively limited to retrofitting of rain gardens within road corridors in order to provide rainwater infiltration that protects stream health.”

Rain Garden Retrofits: “Most of Delta is ditched,” continues Hugh Fraser. “This reflects the municipality’s rural history. Yet there is a homeowner desire for ditch elimination plus implementation of urban servicing standards, even in neighbourhoods that were developed decades ago.  We view grassed infiltration swales, which are rain gardens by another name, as a way to achieve a balanced solution.”

“Even so, we must still deal with this concern: ‘How would a rain garden affect the front of my lot?’ It requires a team effort by designers and constructors to work through the range of public perception issues that revolve around implementation details.”

Balance Btw Public and Private: “Yes, we are making progress on the public side, but there is much more that can be done on the private side,” reflects Hugh Fraser. “The opportunities to work with property owners to retrofit rain gardens result from redevelopment, especially in commercial areas.”

“Creating a watershed health legacy will ultimately depend on how well we are able to achieve rain water management improvements on both public and private sides of a watershed. There is a huge up-side if the private sector embraces their contribution to shared responsibility.”

Changing the Urban Landscape for the Better

Support for streetscape enhancement starts at the top. In 2007, Delta Mayor Lois Jackson opened the Showcasing Green Infrastructure Innovation Series with these observations:

“The Showcasing Series is a major priority for me because this is where it happens. When you have examples of what can be done, and projects are being built, you can then wrap your mind around the green infrastructure vision and say to yourself: what’s the big deal….this is really common sense….if we can do this, then we can do more. And before you know it, the ball is rolling and the landscape is changing for the better.”

Released in January 2015 by the Partnership for Water Sustainability in British Columbia, Delta’s story is told in Creating the Future in The Corporation of Delta: Rain Gardens Help Restore Nature. This is the 4th in the Watershed Case Profile Series. 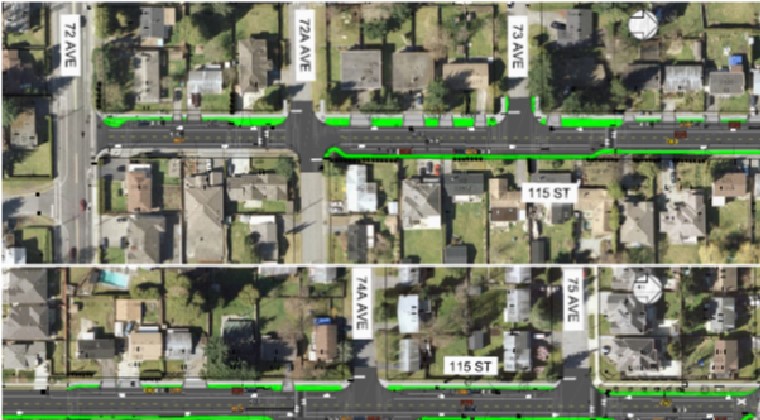 Streetscape Revitalization along 115th Street (btw 72 and 75A Ave) – This project comprised roadside infiltration swales throughout the 0.7 km travel corridor and rain gardens at intersections