Across Canada Workshop Series on Resilient Rainwater Management included a session for the Toronto region: "The workshop provided an opportunity to bring together those who are ‘influencers’ in stormwater management," said Glenn MacMillan of the host TRCA

During the period October-November 2014, the Across Canada Workshop Series on Resilient Rainwater Management showcased the case study experience of those who are leading change in BC. The program introduced audiences in Alberta, Ontario, Quebec and the Maritimes to the Water Balance Model Express for Landowners; and to the District of North Vancouver’s GEOweb open data portal.

The second of five workshops was held in Toronto and hosted by the Toronto and Region Conservation Authority (TRCA). The workshop was “by invitation” as it provided an opportunity to bring together those whose daily decisions influence the form and function of the built environment. The workshop was organized by Glenn MacMillan, TRCA Senior Manager, Water and Energy Management. 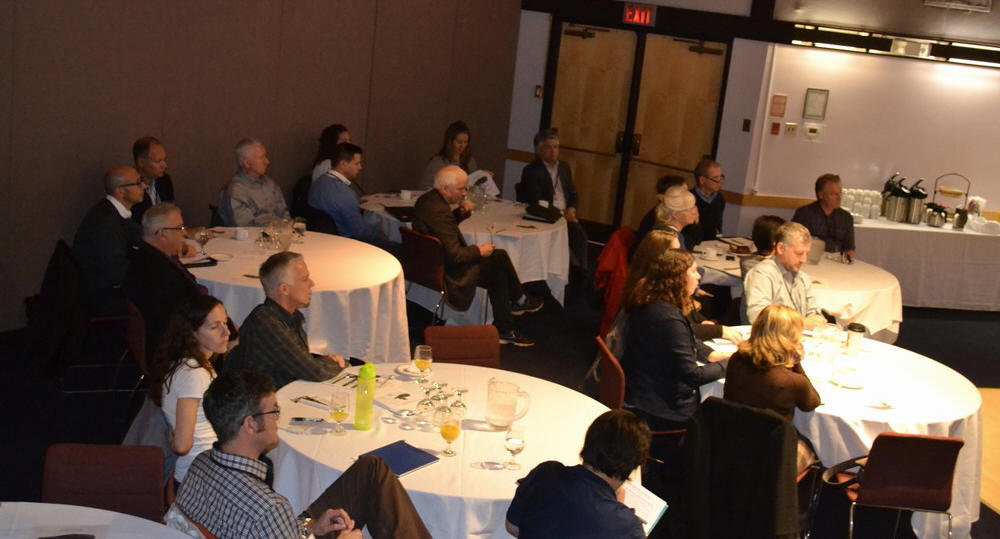 The workshop was held at the TRCA’s Black Creek Pioneer Village.

“Each workshop comprised four modules,” reports Kim Stephens, Executive Director of the Partnership for Water Sustainability in British Columbia. He was the series organizer and team leader for Resilient Rainwater Management: Across Canada Workshop Series on Adapting to a Changing Climate.

“Showcasing the ‘BC story’ at the Toronto workshop supported what the TRCA would like to accomplish in the Toronto region.”

Springboard to an Ongoing National Initiative?

“We wished to understand what BC’s collaborative and adaptive approach to ‘rainwater management and watershed sustainability’ looks like on the ground. The workshop was an opportunity to learn from those who are leading change in BC,” states Glenn MacMillan, in commenting on the decision by TRCA to be a workshop

“The 2014 Across Canada Workshop Series could be the springboard to an annual convening of those practitioners who are leading change across the country. In ‘convening for action’, it would be about sharing what the champions in each province are doing.”

A Workshop ‘By Invitation’

“When TRCA accepted the invitation from the BC team to participate in the national series, we also made the decision that the Toronto Workshop would be by invitation,” continues Glenn  MacMillan.

“We talked with Kim Stephens to gain insight into the BC experience. What’s the hook, we asked him. When we reflected on his observations, we realized that the workshop provided an opportunity for TRCA to bring together ‘influencers’ from a mix of backgrounds. Kim describes ‘influencers’ as those professionals whose decisions on a daily basis are shaping the form and function of the urban landscape.”

“You were hand-picked,” Glenn MacMillan told the workshop audience. “Kim asked me who are the influencers in Ontario around stormwater management. You were selected. We have a broad group today. We strived for a cross-section of local government staff, consultants, developers and provincial staff. And that is what we have.”

“The workshop is all about resilient rainwater management,” he explained. “In Ontario, we use the terms Low Impact Development and Water Balance. Although the terminology is different, it is essentially about the same result, that is – we are striving to mimic pre-development hydrology.”

The Workshop was Inspirational

“We anticipated that the workshop program would be good. In fact, it exceeded expectations,” reports Glenn MacMillan. “One technical area in which the BC team had an impact was the way in which they drew audience attention to the fundamental importance of soil-water interaction; and how an understanding of this relationship holds the key to implementing water balance solutions.”

“Participants described the day as inspirational. To quote one of the engineers who attended: ‘I am old enough to be crusty and not easily impressed, but the BC team was impressive!’ We invited 43 people. With the advantage of hindsight, we could easily have attracted an audience of 100 if we had chosen to open up registration.”

The Partnership’s Jim Dumont opened eyes and minds to the importance of the soil-water relationship in slowing, spreading and sinking rainwater runoff.

Where Does the Groundwater Go?

“At the heart of the Water Balance Methodology is recognition of the integrated significance of these three flow paths, the period of time required for rainwater to reach the stream via each flow path, and the need to protect and maintain the natural distribution of rainwater via each flow path.”

An Introduction to Soil Science Principles

“The topic of shallow and unsaturated groundwater discharge has been undergoing change over the past 10 to 20 years. Prior to that surface hydrologists thought it unimportant,” observes Jim Dumont.

“Many references indicate that up to 90% of all rainfall infiltrates into the ground. That being the case, it then becomes critical to know the fate of the water where volumes are critical.  As an industry of engineers, if we typically deal with only the 10% as surface runoff, are we really comprehending hydrology?”

“The part of the lessons learned comes from some simple soil physics that differentiates in the soil moisture reservoir. A very basic introduction to soil water relationships is critical in understanding the link between rainfall and underground aquifers.”

“A big part of the shallow surface soil is its ability to act as a reservoir in which the drainable portion depends upon the soil texture and a bit on topography and a lot on the processes that created the soil. A key is that the soil will become saturated, but it will take a few days to drain down to Field Capacity.  This is potentially a very large volume when spread over a watershed.”

“Where does this water go? Some would say downward, yet the evidence supplied by the soil indicates this is not the case. The soil reservoir will drain both downwards and sideways.”

“The evidence in the soil is obvious where the soil’s ‘C Horizon’ remains little changed by the influence of water movement from above. The definition of the C Horizon is that it is the Parent Geological Material which has not been altered by biophysical or chemical processes. Therefore, the C Horizon is seldom saturated, and possibly it never gets saturated. One can observe this soil condition by examining a fresh construction excavation shortly after a heavy rain.”

“This information implies that water seldom penetrates to saturate all layers of soil and in particular the C Horizon. If water does not penetrate to saturate the C Horizon, then it must drain through an unsaturated soil in pathways which are both sideways and downward,” concluded Jim Dumont.