Across Canada Workshop Series on Resilient Rainwater Management included a session in Quebec: "We had the chance to welcome the three 'tenors' of water sustainability," said Frédéric Moreau, co-moderator

During the period October-November 2014, the Across Canada Workshop Series on Resilient Rainwater Management showcased the case study experience of those who are leading change in BC. The program introduced audiences in Alberta, Ontario, Quebec and the Maritimes to the Water Balance Model Express for Landowners; and to the District of North Vancouver’s GEOweb open data portal.

The fourth of five workshops was held in Montreal and hosted by Reséau Environnement, with support from Nature-Action Québec. The workshop was co-moderated by Gilles Rivard and Frédéric Moreau.

Reseau Environnement hosted the fourth workshop in the series. The workshop was held in downtown Montreal at the “Maison du Développement Durablé”.

“Each workshop comprised four modules,” reports Kim Stephens, Executive Director of the Partnership for Water Sustainability in British Columbia. He was the series organizer and team leader for Resilient Rainwater Management: Across Canada Workshop Series on Adapting to a Changing Climate.

“A key message for our Quebec audience was that the Province of Quebec’s Rainwater Management Guide reflects proven practice.”

“Module 2 explained the science behind the Water Balance Methodology and how our knowledge expands and becomes clearer over time. This primed the audience for Module 3,” continues Ted van der Gulik, co-presenter and Partnership President.

“In Module 3, the spotlight was on the demonstration of four web-based tools: WBM Express, Drainage Infrastructure Screening Tool, GEOweb and Irrigation Scheduling Calculator.”

In 2011, the Province of Quebec released a Rainwater Management Guide that is enforced by the Ministry of Environment. The Guide identifies strategies for land use planning, principles for design and optimal management practices for urban drainage systems. According to Gilles Rivard, editor and principal author, the technical foundation for this regulatory document has been influenced to some extent by British Columbia experience in pioneering a water balance approach.

“In Quebec, guidelines are requirements,” states Gilles Rivard. “Similar to British Columbia practice, the goal of Quebec’s Rainwater Management Guide is to manage all rainfall events, large and small. The design objective is to ‘reproduce the natural condition’. This is equivalent to the approach in BC which is expressed as ‘mimic the natural water balance’. Like BC, we recognize the need to reduce runoff volume by infiltrating rainwater where it falls,” explains Gilles Rivard.

The Day was Too Short

“On October 31st we had the chance to welcome the three “tenors” of water sustainability – Kim , Ted, and Jim,” states Frédéric Moreau, Director of Business Development with Nature-Action Québec, an environmental non-government organization. “This single day workshop gave us the chance to listen and discover practices from BC in

“The audience had not only the opportunity to learn about best-practices but also to discover tools that can be customized to the local context. We are grateful that the group stopped in Montreal to share this priceless information, one of the five stops across Canada.”

“Thanks for the quality of your presentations. They have been a great source of ideas and inspiration! Unfortunately, the day was too short,” said Martin Bouchard Valentine after the workshop. He is the Stormwater Management Specialist with the Quebec Ministry of Sustainable Development, Environment and the Fight against Climate Change.

“A lecturer from a Montreal-area college attended your workshop. He is preparing a class for his students about stormwater management. He told me that he is using information from your website.  So, the BC approach in stormwater management will pretty soon be explained to our future professionals!”

r. Daniel Pauly of the University of British Columbia developed the concept of the Shifting Baseline Syndrome to describe why each new generation lacks direct knowledge of the historical condition of the environment, and how the resulting lack of understanding and appreciation plays out over time.

“Quebec’s landscape has been transformed over the past five centuries. Tributary streams in urban and rural settlement areas were channelized or eliminated generations ago. So there is no living memory or contemporary awareness of their original fisheries function. As a result, the drivers for Resilient Rainwater Management in Quebec are water quality, flooding and erosion – not fish habitat as it is in British Columbia,” states Kim Stephens. 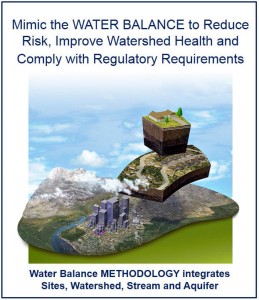 “British Columbia, Quebec and the other provinces may be at different points along the continuum, yet our perspectives are complementary and compatible. While our drivers for action differ, hydrology is still hydrology. Whether the goal is to protect aquatic habitat in headwater streams or reduce total sediment loading in major rivers, water balance thinking still applies.”

“Stream erosion is an example of a commonality. It is caused by changes in hydrology. So, maintain the three pathways to streams to mimic the natural water balance – and thereby prevent erosion.”

To download a PDF copy of the “backgrounder / op-ed” released by the Partnership for Water Sustainability in October 2014, click on Creating the Future in British Columbia: Recognize and Address the “Shifting Baseline”.