An Unexpected Renaissance: River of Hope in the Bronx

Park by Park, Year by Year, A String of Small, Verdant Successes

Perhaps the most unsung patch of heaven in New York City is a tiny sliver of riverfront parkland tucked between a metal-recycling yard and a giant wholesale produce market, on the far side of a six-lane highway and a pair of active freight train tracks. Hunts Point Riverside Park, a 1.4-acre speck in the South Bronx, opened a few years ago on what had been a filthy, weedy street end,” wrote Michael Kimmelman in a feature article published by the New York Times in July 2012.

“For years one of the most blighted, abused waterways in the country, the southern end of the Bronx River has been slowly coming back and with it the shoreline that meanders through the South Bronx.”

To read the complete article, click on River of Hope in the Bronx. Be sure to watch the video that is posted on the New York Times website.

Acknowledgement: Michael Kimmelman is an author, critic, columnist and pianist. He is the architecture critic for The New York Times and has written on issues of public housing, public space, infrastructure, community development and social responsibility. He was the paper’s longtime chief art critic – “the most acute American art critic of his generation,” in the words of the Australian writer Robert Hughes.[1] In 2007, Kimmelman created the Abroad column, as a foreign correspondent covering culture, political and social affairs across Europe and elsewhere. He returned to New York from Europe in autumn 2011 as the paper’s senior critic and architecture critic, and his articles since then have helped to reshape the public debate about urbanism, architecture and architectural criticism. 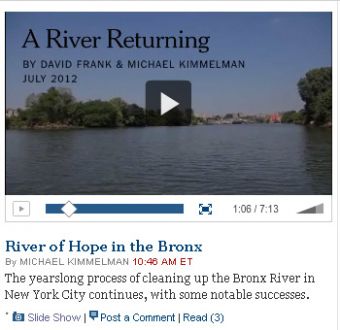