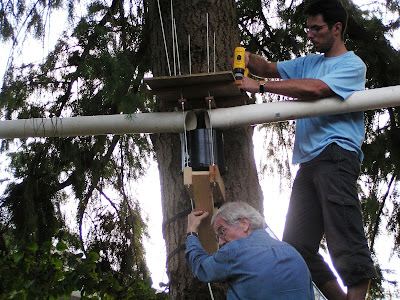 Dr. Hans Schreier of the University of British Columbia.

The programs for each of these regional events included a presentation on the Urban Forest Research Project that was implemented in Metro Vancouver during the 2005 – 2010 period. The resulting paper was co-authored by Dr. Markus Weiler and Yeganeh Asadian.

“Interception loss plays an important role in controlling the water balance of a watershed, especially where urban development has taken place. The

aim of the Urban Forest Research Project was to illustrate the importance of urban trees as a form of ‘green infrastructure’ where they reduce rainwater runoff and rainwater intensity. In addition, trees cause a delay in precipitation reaching the ground,” states Dr. Markus Weiler, former Chair of Forest Hydrology at UBC. He was responsible for the developing the research approach.

“We monitored interception and throughfall over a one year cycle for which the results of seven discrete storm events for coniferous trees from the District of North Vancouver during 2007 to 2008 are presented in our paper titled A New Approach in Measuring Rainfall Interception by Urban Trees in Coastal British Columbia,” continues Yeganeh Asadian.

“Cumulative gross precipitation for seven selected events was 377 mm. Average canopy interception during these events for Douglas-fir and western red cedar were 49.1% and 60.9%, where it corresponded to average net loss of 20.4 and 32.3 mm, respectively.”

“Interception losses calculated for urban trees were approximately twice as great as those calculated for trees within natural forest stands. The identified controls on interception loss were meteorological factors, tree type, and health. The results were variable depending on location, tree health, and canopy structure.”