Rainwater Revolution: Imagine rain as a resource instead of an urban inconvenience 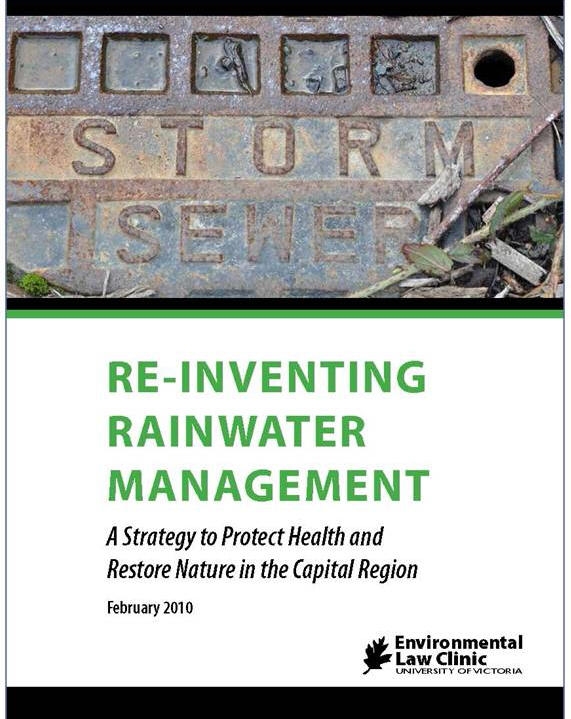 “Recently, the University of Victoria Environmental Law Centre captured the flaws in, and proposed solutions to, our present rainwater management system. What the ELC calls for is a region-wide integrated approach, recognizing the value of rainwater as a resource, rather than an inconvenient intrusion into the urban landscape,” writes Jason Youmans in Monday Magazine.

Getting Better All the Time

“It’s about addressing that grievous mistake that we made 150 years ago, when thinking

that the solution was to pipe and convey the water off of properties,” says ELC Legal Director Calvin Sandborn. “It’s like everything else that we deal with in the environmental field: it’s by respecting natural systems that you can actually have human benefit if you recognize the natural systems and work with, as opposed to counter to, those systems.”

“The report asks readers to consider the missed opportunity that allowing our rainwater to rscape through storm drains constitutes. Rather than capturing and putting it to productive use, we instead view the excess water as yet another form of waste to be disposed of. So, instead of harvesting it and using it to our benefit…we instead hope enough wet stuff falls to top up our regional reservoir so we can continue to green our lawns and fill up our toilet tanks with piped water, summarizes Jason Youmans.

“Despite an absence of legislation reauiring it, local governmetns and builders are gradually moving toward the implementation of what is known as ‘Low Impact Development’ – that is, development that strives to work in concert with natural systems, rather than against them,” explains Jason Youmans.

“Looking around the Capital Regional District, examples of the paradigm shift to understanding rainwater as a resource, rather than a blight, abound,” writes Jason Youmans. He then provides examples at the University of Victoria, at Saanich CIty Hall and in the Bowker Creek Watershed.

To read the complete article by Jason Youmans, click on Rainwwater Revolution

To download the complete report, click on Re-Inventing Rainwater Management: A Strategy to Protect Health and Restore Nature in the Capital Region, released in February 2010.