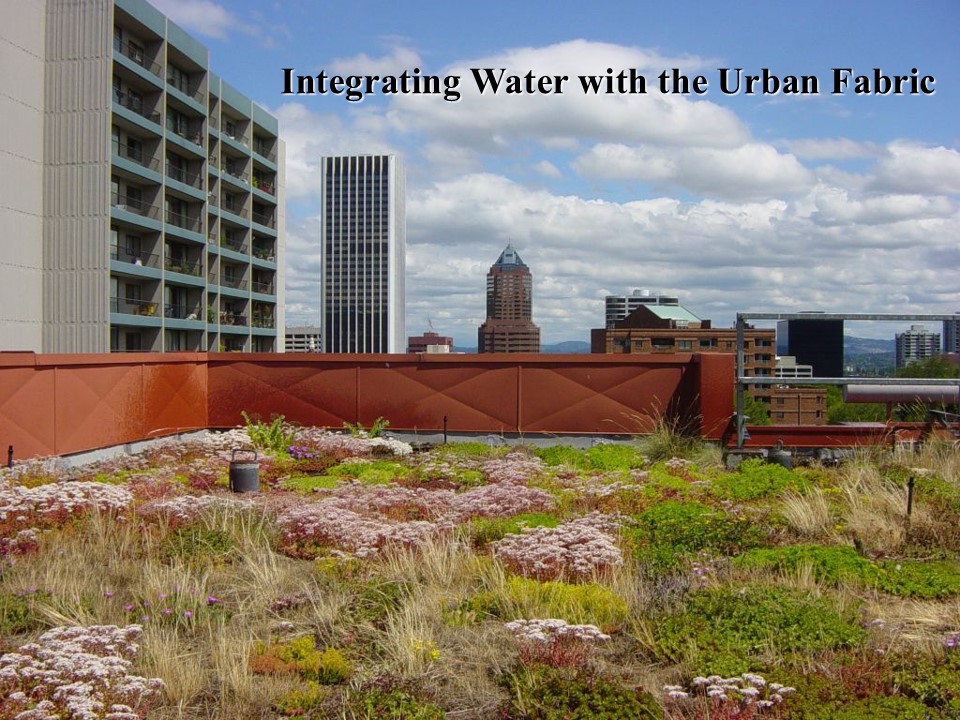 “The language of drainage practitioners is in transition and is being simplified so that there will be a clearer public understanding of the suite of source control options  for capturing rain where it falls. Changing the language is part and parcel of implementing ‘integrated solutions’ that are landscape-based,” stated Kim Stephens when he introduced Tom Liptan as a featured speaker at the Water in the City Conference held in Victoria, British Columbia in September 2006.

A landscape architect and ecological designer with Portland’s Bureau of Environmental Services, Tom Liptan has been a driving force behind the research and development of new urban techniques, codes and policies in Portland. The success and recognition of these approaches has spread internationally. His work has been recognized in various media, he has received numerous awards and has served as a keynote speaker at many conferences.

Tom Liptan informed his Canadian audience that the City Portland has coined the acronym RAIN to contrast contemporary ‘rainwater management’ with traditional ‘stormwater management’, where:

“Most communities have developed in similar ways regardless of climate. Design principles have facilitated swift conveyance of stormwater and the pollutants it carries into receiving waters. This practice and other unfortunate consequences of past design must change,” says Tom Liptan. His presentation described the wide ranging measures the city is taking to mimic nature’s methods of treating stormwater.

To view his feature presentation at the Water in the City Conference, click on this link to Integrating Water in the Urban Fabric, September 2006.

When he began his 90-minute presentation, Tom Liptan commented that “It is great to see that the Province of British Columbia is proactively encouraging the drainage community to start using the all-encompassing Rainwater Management as an alternative to single-objective Stormwater Management. The language-shift that you have initiated in British Columbia is what we would like to see happen in Portland. This is one reason why the Bureau of Environmental Services has coined the RAIN acronym. We believe this will help promote changes in thinking and practice so that we achieve beneficial outcomes.”

“Most cities develop in very similar ways, regardless of climate. Vegetation and soil are removed and covered with impervious surfaces in the form of rooftops and pavement. These surfaces then facilitate the undesirable effect of rainwater runoff, which carries urban pollutants to receiving waters and infrastructure systems”, stated Liptan in his opening remarks.

“The basic things we design, build, and do, in our cities are the cause of many health, economic and environmental concerns, contributing to air quality degradation, urban heat island effects, human health impairment, energy consumption, water pollution, loss of fauna, flora and aquatic life”, Liptan continued.

“But it doesn’t have to be this way”, noted Liptan, “Designing with and re-introducing natural elements such as soil, water, and vegetation on rooftops, streets, sidewalks, and parking lots is showing promised in Portland, Oregon. These design techniques are being tested on city streets and private development. Monitoring the results show efficient management of precipitation and rainwater runoff is being achieved.”

“Traditional stormwater management has a narrow scope, is event-based, and only considers a handful of runoff events that might occur in a given year. Rainwater management, on other hand, accounts for all the rainfall-days that occur each year. Rainwater management is all about developing in a way that restores the function and value of trees, soil and open space in our communities. If we develop today with long-term sustainability in mind, future generations can enjoy a vibrant city and clean and healthy rivers, instead of bearing the burden of our actions”, concluded Liptan.