BC’S GREEN INFRASTRUCTURE PARTNERSHIP: “You can trust these people. Their only goal is to turn you on to the practical reality that designing with nature – particularly water – is underway, is working, and holds out hope for communities and cities to function better,” stated (former) West Vancouver Mayor Pam Goldsmith-Jones when she facilitated a presentation to elected representatives on the Metro Vancouver Sustainable Region Initiative Task Force (October 2006)

In October 2006, a delegation from the Green Infrastructure Partnership met with the elected officials who comprise the Sustainable Region Initiative (SRI) Task Force, chaired by Mayor Lois Jackson, Municipality of Delta. The meeting  was facilitated by Mayor Pam Goldsmith-Jones, District of West Vancouver. Click on Changing the Way We Develop Land: A Presentation by the Green Infrastructure Partnership to download the slides that guided the ensuing roundtable discussion.

An outcome of the meeting was that the Green Infrastructure Partnership was invited to participate in the Metro Vancouver region’s Sustainability Community Breakfast program. “The monthly breakfast meetings provide an ongoing opportunity for network and partnership building while at the same time building awareness and understanding of urban sustainability challenges, bringing together individuals and organizations interested in the sustainability of the region,” explained Mayor Lois Jackson.

Paul Ham was with the City of Surrey for over 30 years, where he had a distinguished career and rose to City Engineer. In 2005, he succeeded Chuck Gale as GIP Chair. He served as Chair until 2008 when he retired from the City. Under Paul Ham’s leadership, GIP initiatives enhanced the credibility of the Water Sustainability Action Plan.

Design with Nature: Green, Heal and Restore the Earth

Ian McHarg’s “Design with Nature” vision was embraced by the Green Infrastructure Partnership as its guiding philosophy. In parallel, McHarg’s vision also influenced the Water Sustainability Action Plan because green infrastructure is the foundation for water sustainability. In his 1969 book, Design With Nature, McHarg pioneered the concept of environmental planning.

“So, I commend Design with Nature to your sympathetic consideration. The title contains a gradient of meaning. It can be interpreted as simply descriptive of a planning method, deferential to places and peoples, it can invoke the Grand Design, it can emphasize the conjunction with and, finally it can be read as an imperative. DESIGN WITH NATURE!,” wrote Ian McHarg.

“The paradigm-shift that occurred during Paul Ham’s watch far exceeds our original expectation that the partnership would be a catalyst for change. I am so proud of all those committed participants who have been instrumental in making this initiative an unqualified success in BC’s environmental history,” stated Chuck Gale, Founding Chair of the Green Infrastructure Partnership, in a 2008 statement.

“Under Paul Ham’s leadership, the Green Infrastructure Partnership has achieved a great deal since 2005,” added Ray Fung when he succeeded Paul Ham as Chair in 2008. “The Showcasing Green Infrastructure Innovation Series, for example, has helped local government practitioners immeasurably by creating forums for them to share their experiences and lessons learned. This has created a ripple effect that has spurred even more innovation.”

“Paul Ham changed history by enabling his staff to pioneer implementation of green infrastructure. He set in motion a chain of events. That is his legacy. At a regional scale, Paul Ham enhanced the credibility of the GIP. This enabled us to build bridges to elected representatives and senior managers in the Metro Vancouver region. A defining moment in GIP evolution was our meeting with the mayors on the Sustainable Region Initiative Task Force in October 2006,” continued Kim Stephens, Executive Director, Partnership for Water Sustainability in BC.

“The opportunity to present to the Sustainable Region Initiative Committee of the GVRD Board was a huge opportunity,” stated West Vancouver Mayor (2005-2011) Pamela Goldsmith-Jones in December 2006.  “You can trust these people. Their only goal is to turn you on to the practical reality that designing with nature – particularly water – is underway, is working, and holds out hope for communities and cities to function better, to our lasting benefit.”

“I can still remember the day that the City of Surrey’s Planning General Manager, Murray Dinwoodie, came into my office in 2005. He said that Chuck Gale was looking for a new person to chair the Green Infrastructure Partnership (GIP) and would I be prepared to step in. It was just what I did not need at the time, an extra job to do,” recalled Paul Ham in 2014 on the occasion of the 10th anniversary of the release of the Water Sustainability Action Plan.

“Chuck had just retired as the City Engineer for Richmond, was stepping down as GIP Chair, and a new volunteer was needed to take Chuck’s place. However, realizing that this was an important Partnership to be involved with in this time of rapidly changing servicing standards and ways of better managing rainwater, I, somewhat tentatively, agreed to help out.”

“This was about the same time that the City of Surrey was looking at trying out new, more sustainable, servicing standards for the new neighbourhood of East Clayton which was about to develop. These new development standards were being developed in conjunction with the UBC School of Landscape Architecture, led by Patrick Condon.” 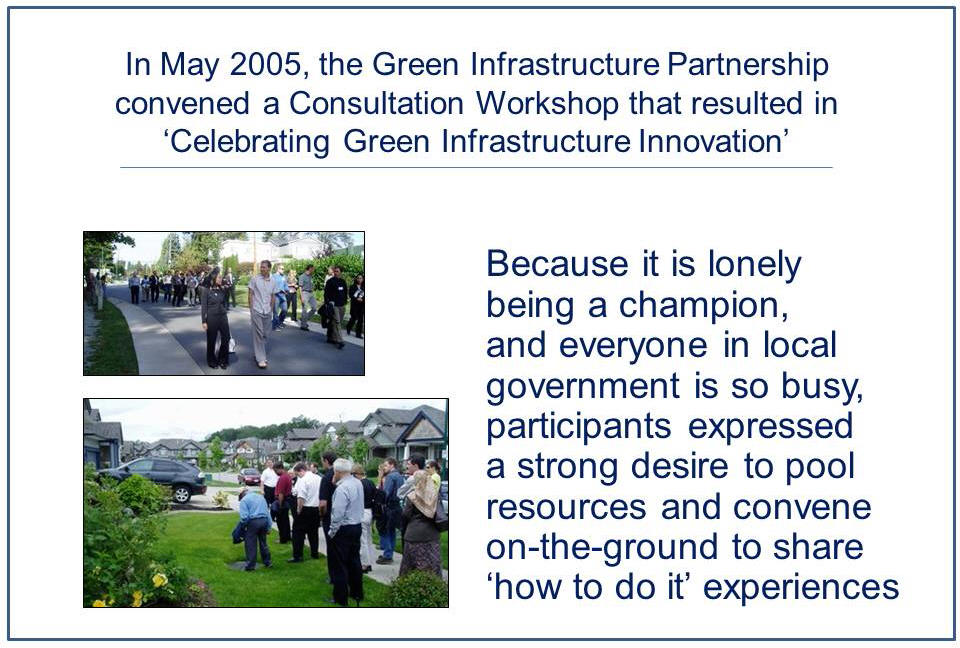 Convening for Action in Metro Vancouver

“Shortly after becoming GIP Chair, I met with my peers on the Metro Vancouver Regional Engineers Advisory Committee (REAC), and asked them to support and participate in a Green Infrastructure Consultation Workshop that the City of Surrey would host in May 2005 on behalf of the GIP. This proved to be a transformational event. The majority of Metro Vancouver municipalities participated. The ‘Convening for Action’ initiative was well and truly launched.”

“Chairing the Partnership made me realize how many new ideas in sustainable servicing were being tried out around the Region and the Province. To spread the word on what was happening in the region a number of one day seminar and field demonstration events were held under the banner of the Showcasing Green Infrastructure Innovation Series.” 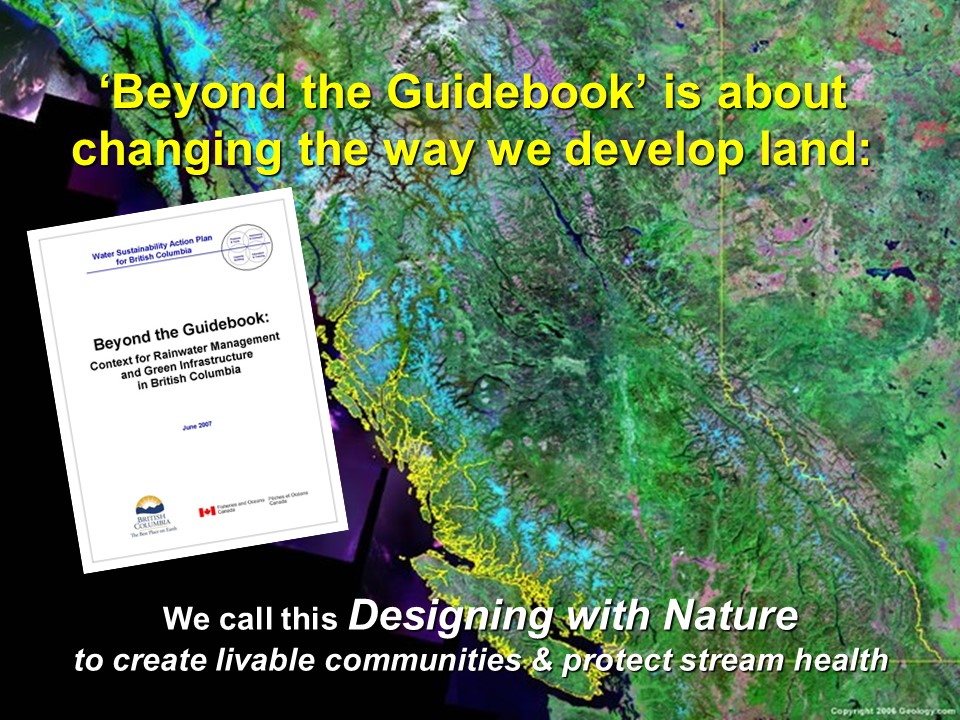 “In the fall of 2007, the GIP collaborated with APEGBC to jointly organize the first Beyond the Guidebook Seminar. Because the GIP Steering Committee included the Ministry of Community Services and Fisheries and Oceans Canada, the seminar provided a timely opportunity to inform local government and land use practitioners regarding the emerging policy framework and senior government expectations for applying a Beyond the Guidebook approach to land development and watershed management.”

Partnership for Water Sustainability: “keeper of the GIP legacy”

“This success helped to lay a strong foundation for incorporation of the Partnership for Water Sustainability in BC. This entity is now the hub for a ‘convening for action’ network in the local government setting, and the keeper of the GIP legacy,” concluded Paul Ham. 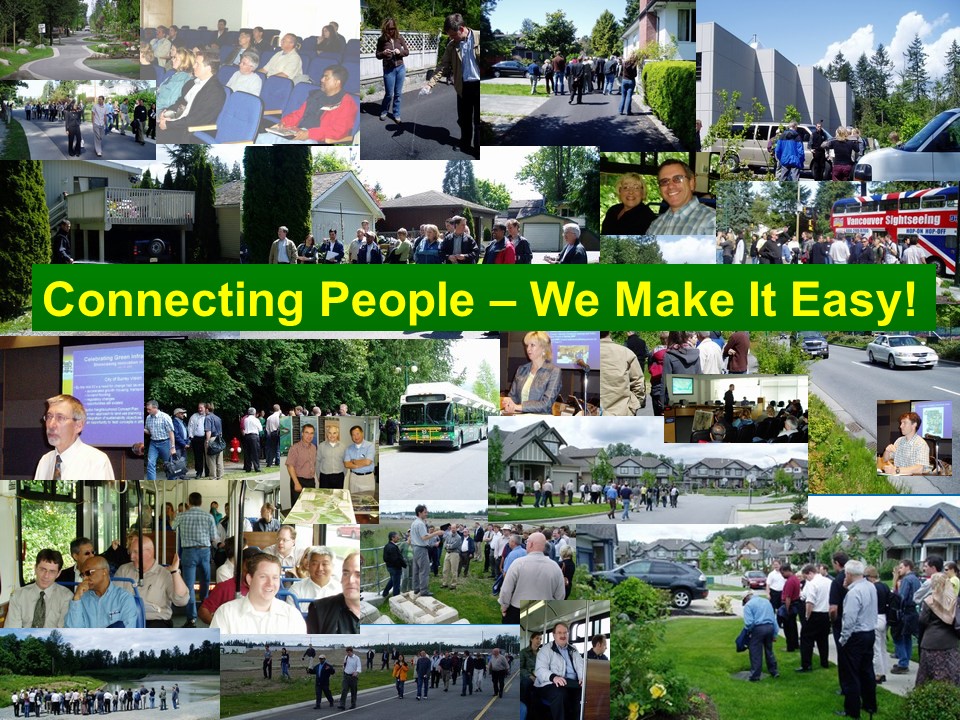