BRITISH COLUMBIA’S INFRASTRUCTURE GRANT CONDITIONS HAVE MADE THE RULES SERVE THE GOALS: At the inaugural Comox Valley Learning Lunch Seminar Series, Catriona Weidman foreshadowed that “adapting to climate change and reducing the impact on the environment will be conditions of receiving provincial infrastructure funding” (September 2008)

Provincial intervention and regional district restructuring spurred inter-governmental cooperation in the Comox Valley. As part of the Living Water Smart roll-out, seminar programs were implemented in both the Comox Valley and the Cowichan Valley.  At seminar #1 in the Comox Valley series, Catriona Weidman spoke on behalf of the provincial government. She elaborated on an approach for using infrastructure grants to help incentivize and advance changes in local government practices for municipal services.

With the passage of time, and with specific reference to British Columbia’s infrastructure grant process, the expectations of 2008 have indeed become the standards of 2020. Or expressed another way, the rules serve the aspirational goals in Living Water Smart, namely – create liveable communities and protect stream health.

Download a copy of the The Story of the 2008 Vancouver Island Learning Lunch Seminar Series, 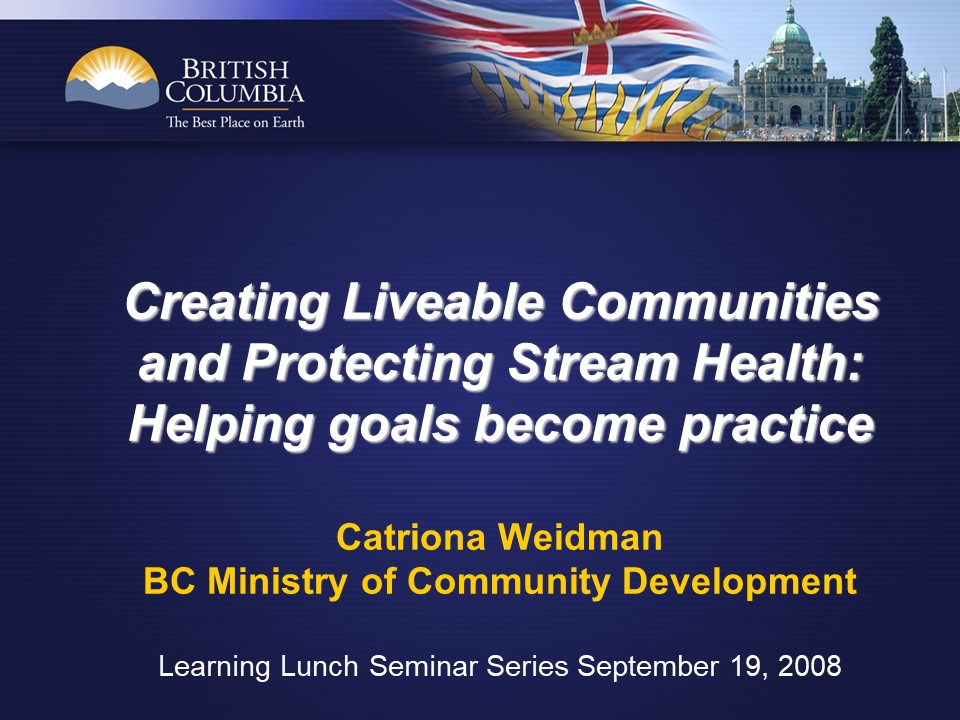 In 2008, launch of the outreach program for Living Water Smart, British Columbia’s Water Plan commenced with a precedent-setting approach to capacity-building in the local government sector. Implemented in the Comox and Cowichan valleys, it was a demonstration application of how to build inter-departmental and inter-governmental alignment to achieve the Living Water Smart vision for adapting to a changing climate and creating greener communities.

“We are using the slogan The New Business as Usual to convey the message that, for change to really occur, practices that until now have been viewed as the exception must become the norm moving forward. We have to build regulatory models and develop models of practice and expertise to support The New Business as Usual,” stated Dale Wall, then the Deputy Minister of Municipal Affairs, when he announced the Vancouver Island Learning Lunch Seminar Series at the 2008 Gaining Ground Summit.

The announcement foreshadowed the leveraging its grants programs to influence changes on the ground. As part of the transition, assessment criteria were then being based on a philosophy of “the greener the better”. In future, the message was that all projects must meet a green standard. The Province’s position was becoming clear: Adapting to climate change and reducing British Columbia’s collective impact on the environment would be a condition for receiving provincial infrastructure funding.

The Province enacted legislation (Bill 27) that would help municipalities and regional districts create more compact, sustainable and greener communities. The legislation came into force in June 2008. Now local governments were now required to include greenhouse gas emission targets, policies and actions in their Official Community Plans and Regional Growth Strategies.

ccording to Smart Growth BC: “This Bill is an excellent step towards climate protection, and many of the tools will assist local governments in addressing energy and greenhouse gas emissions.”

At the first in the 2008 Comox Valley Learning Lunch Seminar Series, hosted by the City of Courtenay, Catriona Weidman of the Ministry of Community Development elaborated on the Province’s guiding philosophy for doing business differently.

The video of her presentation has been divided into two segments and uploaded to YouTube – the first part is 5 minutes and covers Changing the Rules and Living Water Smart; the second part is 8 minutes in length and deals with funding.

“There are three types of funding: planning, construction and recognition,” explained Catriona Weidman. The purpose of the Infrastructure Planning Grant Program, for example, is to assist local governments in developing sustainable infrastructure. “This program is one of the few that we have that is not always over-subscribed. If you wish to do small levels of planning in your community, then I would encourage you to apply.”

Catriona Weidman outlined a number of ideas that would be received favourably by the Ministry under the Infrastructure Planning Grant Program. She suggested that local governments might wish to start with a stream health feasibility study. “You might also wish to do a study to identify locations for rain gardens; or where you can put in pathways along streams.”

“As we move forward, projects will only be eligible where they are green and sustainable,” she emphasized when explaining how grant programs will leverage change through eligibility and assessment criteria. 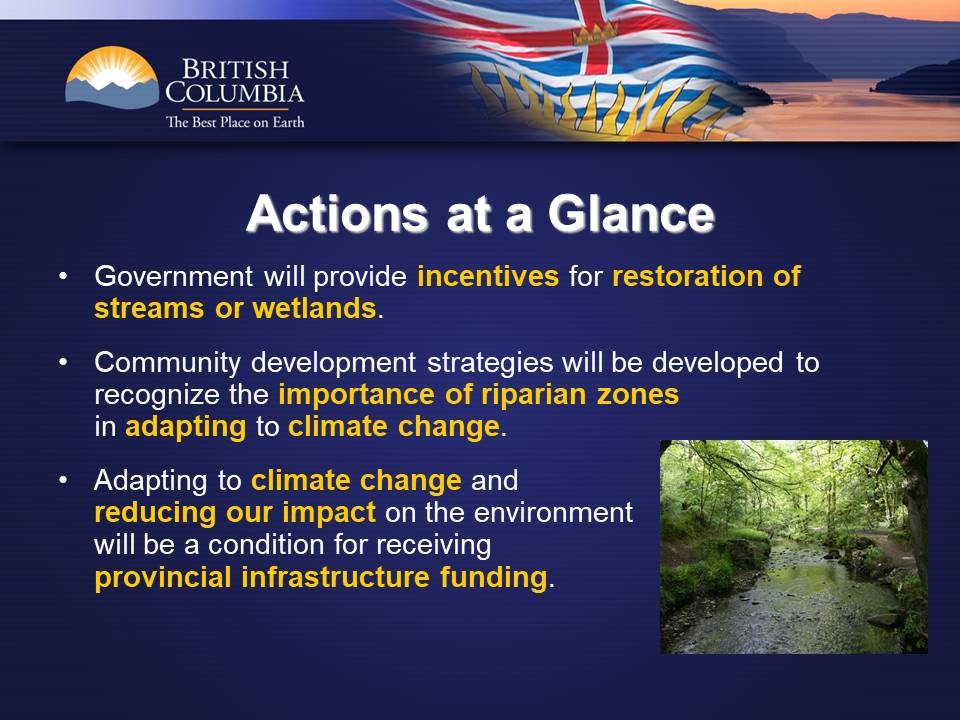