Released in June 2020, the 44-page The Protective Value of Nature report released is a joint effort between the National Wildlife Federation and Allied World, a global insurance and reinsurance firm.

The Protective Value of Nature summarizes the latest science on the effectiveness of natural infrastructure in lowering the risks to communities from weather – and climate-related hazards – benefits often described as “natural defenses”. The report draws on more than 300 published articles from academic, government and nonprofit-affiliated researchers. 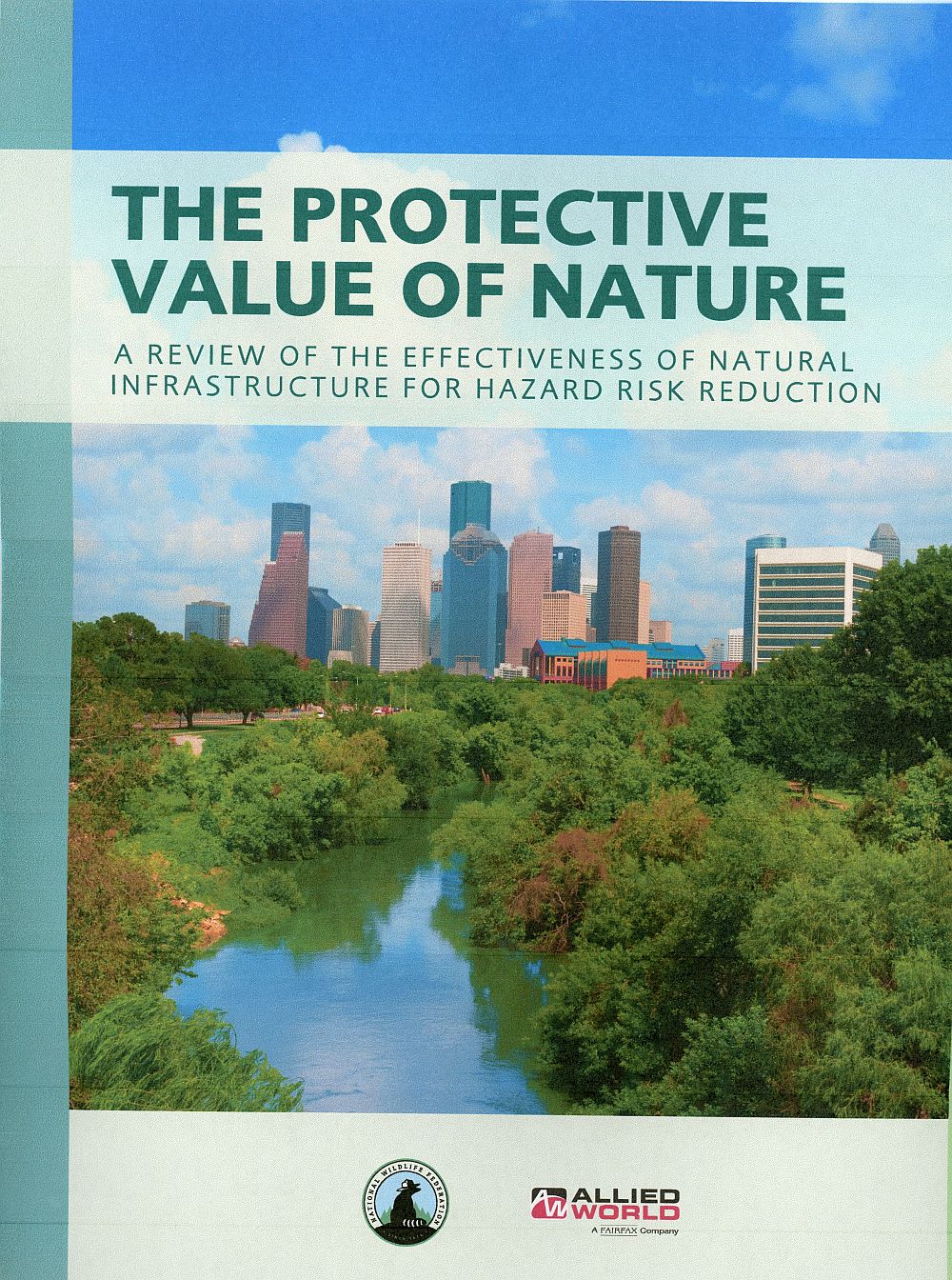 “The science is clear—both model-based studies and empirical evidence from around the world show that natural infrastructure can provide significant, quantifiable levels of protection for communities from natural hazards, and is often more cost-effective than structural infrastructure,” said Jessie Ritter, a study co-author and the National Wildlife Federation’s director of water resources and coastal policy. She oversees campaigns to protect clean water and wetlands, restore America’s iconic coastal ecosystems, and increase the resilience of communities and wildlife.

“The use of natural infrastructure for hazard risk reduction has not reached its full potential. This is due, in part, to perceptions that conventionally engineered approaches are always more effective – despite numerous instances when they have failed.”

Green Infrastructure Can Be Cheaper, More Effective than Dams

The report emphasizes that both model-based assessments and empirical evidence from recent floods, hurricanes, wildfires, and other natural disasters underscore the considerable risk reduction services that natural systems such as wetlands, reefs, dunes, floodplains, and forests provide.

At the same time, and as the report points out, natural infrastructure offers numerous additional benefits to society, from provision of food and clean water for people and habitat for fish and wildlife, to recreational opportunities, and cultural and spiritual fulfillment.

According to the authors, the evidence suggests that both natural and nature-based approaches for hazard mitigation can be equally or more effective than conventional structural approaches, and they are often more cost-effective.

Since healthy, intact ecosystems are often adapted to natural disturbances such as floods and wildfires, they may have the capacity to withstand or recover from extreme weather- and climate-related hazards and adjust to ongoing environmental changes.

Conventional structural approaches (i.e., “gray infrastructure”), on the other hand, often require ongoing maintenance, and may need costly repairs when they fail or are damaged. Thus, natural defenses can play a critical role in enhancing the resilience of human and ecological systems to natural disasters and climate change.

Download Green Infrastructure Can Be Cheaper, More Effective than Dams to read the complete article published by Scientific American.

Download a copy of the report titled The Protective Value of Nature.