FLASHBACK TO 2013: Massive floods in Alberta and in the Toronto region provided the same kind of wake-up call that B.C. got in 2003, when it was hit by wild fires and drought (article published in the Globe & Mail newspaper, July 2013)

The story below is adapted from an article published in the Globe & Mail newspaper after major floods occurred in southern Alberta and in the Toronto region of Ontario in June 2013 and July 2013, respectively. These events are seen as consequences of a changing climate. 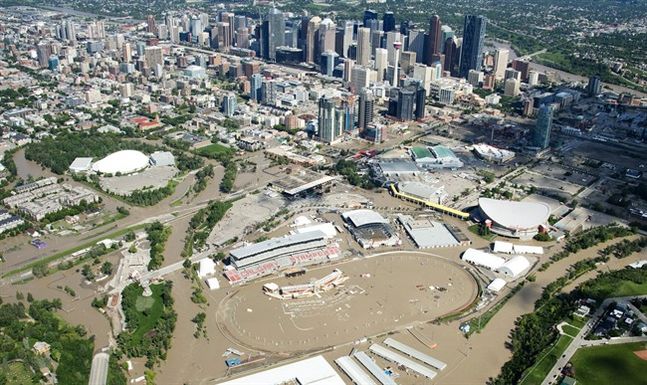 “The floods are providing the same kind of wake-up call that B.C. got in 2003, when it was hit by wild fires and drought, says Mr. Stephens,” wrote Wendy Stueck.

“Over the past few years, Mr. Stephens has seen municipalities develop detailed plans that put as much emphasis on area watersheds as on homes, roads and playing fields. Such planning and development, he believes, could help cities cope with the kinds of rains that pummelled Calgary and Toronto.”

“It’s really reminding us that if you don’t respect Mother Nature, and if you don’t design with nature, this is what happens,” Mr. Stephens says. “But that doesn’t mean we can’t turn the clock back,” he adds.

Satellite photo of the Okanagan Valley on fire in 2003

“Context is important. My 40-year professional career has been defined by floods and droughts. Each decade we have had at least one of each. As an engineer, one becomes accustomed to writing a post-mortem analysis on a flood or drought, and then the report goes on a shelf until the next flood or drought. The window for action is a small one,” states Kim Stephens.

“Our memories are short and we quickly lose momentum. Once a community recovers from the initial impact of a drought or flood, people soon get on with their lives and quickly forget any lessons that might have been learned. My experience is that the window of opportunity for capitalizing on the teachable moment is only a year or two at most.”

“Several decades ago I attended a workshop taught by a veteran engineer and decision-maker from the Chesapeake Bay region. To this day, I remember his parting words of wisdom. He said: never lose sight of the fact there will always be a bigger flood and a longer drought than the flood or drought of record. And the reason is that our knowledge and understanding of extreme events is based on a snapshot in time.”

“The heightened awareness made it possible to develop the Water Sustainability Action Plan for BC, released in February 2004. The goal was to capitalize on the teachable moment and instil a new land ethic, one that respects nature. And that takes time. Rather than write reports, we set out to encourage action on the ground.”

“We identified, showcased and supported the champions who were leading change in the local government setting. It was very much about establishing and drawing attention to the precedents and demonstration applications that would inspire others to follow in the wake of the champions.”

“While we have had a decade of success in delivering the Action Plan, BC is only now at a tipping point where we can start to turn the clock back to restore watershed health,” continues Kim Stephens. “Coming in rapid succession as they did, I believe that the Alberta and Toronto floods have had an impact of the psyche of all Canadians.  This has created another teachable moment.”

“Restoring watershed health is about mimicking the Water Balance so that each site will function as it did before, or better. Redevelopment creates the opportunity to ‘get it right the second time’. It will take time, but we can do it if all the players understand the goal and embrace shared responsibility. This is why initiatives such as the Bowker Creek Watershed Blueprint in the Capital Region District, and the Hastings Creek Watershed Blueprint in the District of North Vancouver, are so important. Both are leading by example.”

“We have the tools. We have the science-based understanding. We know what works and we know how to implement a design with nature approach. Install green infrastructure that restores the Water Balance. If we focus our efforts on that outcome, we can make it happen. The next 12 months will be critical,” concludes Kim Stephens.

To read the complete story by Wendy Stueck as published in the Globe & Mail newspaper, click on Vigilance hits a high water mark.