“Sometimes the scale of change seems overwhelming. But little changes, carried out by a lot of people is a positive move in the right direction as we adapt to living on a changing world,” says Bob McDonald, host of Quirks & Quarks on CBC Radio, on commenting on a new report from the Intact Centre titled Too Small to Fail

The Intact Centre on Climate Adaptation (Intact Centre) is an applied research centre with a national focus within the Faculty of Environment at the University of Waterloo. The Intact Centre works with homeowners, communities, governments and businesses to identify, and reduce, the impacts of extreme weather and climate change. Read their brochure to learn more.

CLIMATE ADAPTATION: “Too Small to Fail – How Communities Can Prepare for Bigger Storms”

A new report from the Intact Centre on Climate Adaptation at the University of Waterloo stresses the importance of community-based projects to reduce increasing flood risk in Canada. The Intact Centre is an incubator of new adaptation ideas, conducting research, knowledge mobilization and promoting initiatives aimed at de-risking the negative impacts of a changing climate and extreme weather. The projects were grouped into three categories:

Paved surfaces means the water has nowhere to go

“The biggest contributor to flooding is the fact that excess water from heavy storms has nowhere to go,” wrote Bob McDonald, host of the award winning radio show Quirks & Quarks, on his blog after he read about the report Too Small to Fail. He is also a science commentator for CBC News Network and CBC-TV’s The National. He has received 12 honorary degrees and is an Officer of the Order of Canada.

“The weekly e-Newsletter from the Partnership for Water Sustainability in British Columbia brought Too Small to Fail to my attention. And so I featured it on Quirks & Quarks in order to share the issue and the solutions with a larger audience.

“As our urban areas grow, we have covered what was once porous forest floor or plant-covered land with pavement, sidewalks, driveways and patios. Rainwater that was once able to sink into the soil now runs across the surface, accumulates into large volumes and overwhelms storm sewer systems. The result is a flood and costly property damage.

“One solution is to make the urban landscape more porous, so the water can sink into the ground rather than accumulate on the streets and in basements.”

“Among the 11 projects: experts visited 100 homes in Calgary as part of an education program to look at simple solutions for the household such as changing the angle of the downspouts, so water doesn’t fall close to the foundation of the house; 30 “Depave” projects in Ontario and Alberta replaced pavement with porous material for water absorption; in Quebec, a green alley was created in one community, while trees were planted in a storm runoff area in another.

“The beauty of these projects is that they were mostly community-based. People were willing to give their time and muscle power to rip up pavement, dig in the dirt, plant trees or gardens because they realized it was an investment in the safety of their own homes and businesses. It also improved the aesthetics of the regions by adding more greenery.

“It is a harsh reality that we need to adapt to a changing planet. Sometimes the scale of change seems overwhelming, such as the transition from fossil fuels to cleaner forms of energy. But little changes, carried out by a lot of people is a positive move in the right direction as we adapt to living on a changing world, concluded Bob McDonald.

Download a copy of the report published by the Intact Centre, click on Too Small to Fail – Protecting Canadian Communities from Floods 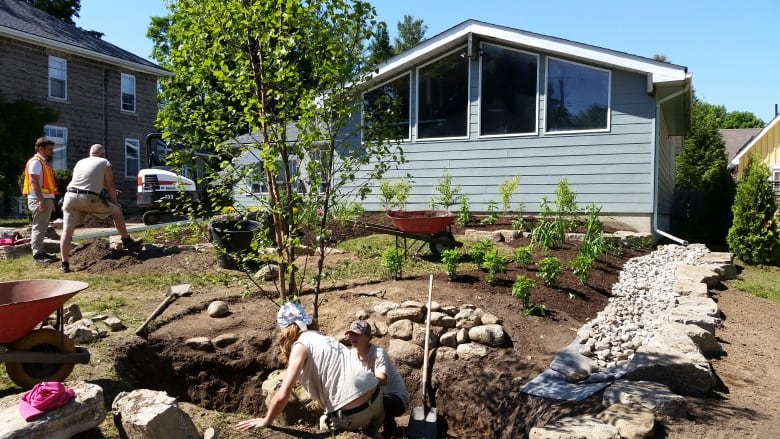