GREEN INFRASTRUCTURE IN THE TOWNSHIP OF LANGLEY: “The structure is set up to support good ideas of an integrated nature so that staff can flourish in the work environment,” stated Stephen Richardson, the Township’s Director of Development Services

October 21, 2017 - Posted in articles for period 2009 thru 2020, Showcasing of Green Infrastructure Innovation in British Columbia 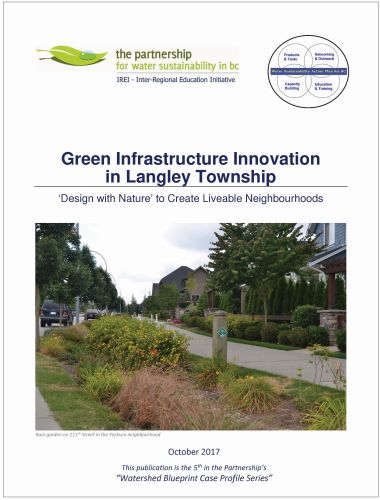 The Langley Township story is the fifth in a series of Watershed Blueprint Case Profiles published by the Partnership for Water Sustainability.

The series showcases and celebrates successes and long-term ‘good work’ in the local government setting.

The purpose of the series is to inform and facilitate inter-regional collaboration in the Georgia Basin.

By telling the stories of those who are spearheading changes in practice, this helps other local governments eliminate the “disconnect between information and implementation” that may otherwise hold them back.

Integration of Perspectives:
Three Groups in One Section

When interviewing Township staff, an obvious question is this: As staff come and go over time, how does the organization sustain the guiding philosophy, core values, and way of doing daily business that are embodied in the phrase ‘harmony and integration’?

Expressed more succinctly, how does one instil a stewardship ethic in the corporate culture so that the legacy would be lasting?

The Township is progressing on an inter-generational journey. In 2007, Ramin Seifi and Colin Wright painted a bold vision of a sea-change that would lead to a green infrastructure future.

A decade later, the evidence on the ground proves that the ‘green’ vision does indeed have substance. By designing with nature, the outcome would be sustainable watershed systems.

“The shaping of land for human use ought to be based on an understanding of natural process,” wrote Ian McHarg (1920-2001). He was a renowned landscape architect, writer, educator, “father of GIS”, founder of environmental planning, and author of Design With Nature (1967), one of the most influential works of its kind.

The Whole is Greater Than the Sum of its Parts

The Community Development Division includes the Development Services section. Stephen Richardson is the section Director. Reporting to Ramin Seifi, he has been with the Township since 2010. The instant Stephen read the 2007 collaboration quote (see below) by Ramin Seifi, he emphatically stated that:

“Inter-department collaboration has continued; and it has been strengthened through the decision to house three groups in one section. My section, Development Services, has three departments – Development Planning, Development Engineering and Green Infrastructure Services. This integration allows us to cascade from watershed planning down to the site.”

“Integration leads to efficiencies,” stressed Stephen Richardson. To illustrate his point, he pointed to three piles of documentation around his office, one from each department.

“The purpose in having the three groups within one section is to integrate the pieces of any development proposal. So, in terms of the three professional disciplines represented by the departments, the whole is greater than the sum of its parts. This synergy allows us to catch the pieces that might otherwise be missed.”

“What we are showcasing today is the outcome of years of inter-departmental collaboration,” stated Ramin Seifi in 2007. “It was not a random decision to choose Harmony and Integration as the theme for this Showcasing Innovation event. It captures our core values.” Ramin added that he is a living example of integration because he is an engineer who heads the planning department.

To read the complete story, download a copy of the Watershed Case Profile. Click on Green Infrastructure Innovation in Langley Township, released in October 2017.

The Table of Contents below is a synopsis. It distills the essence of each section into a succinct statement. These create a storyline. Readers are asked to pause and reflect on them before reading the story itself. 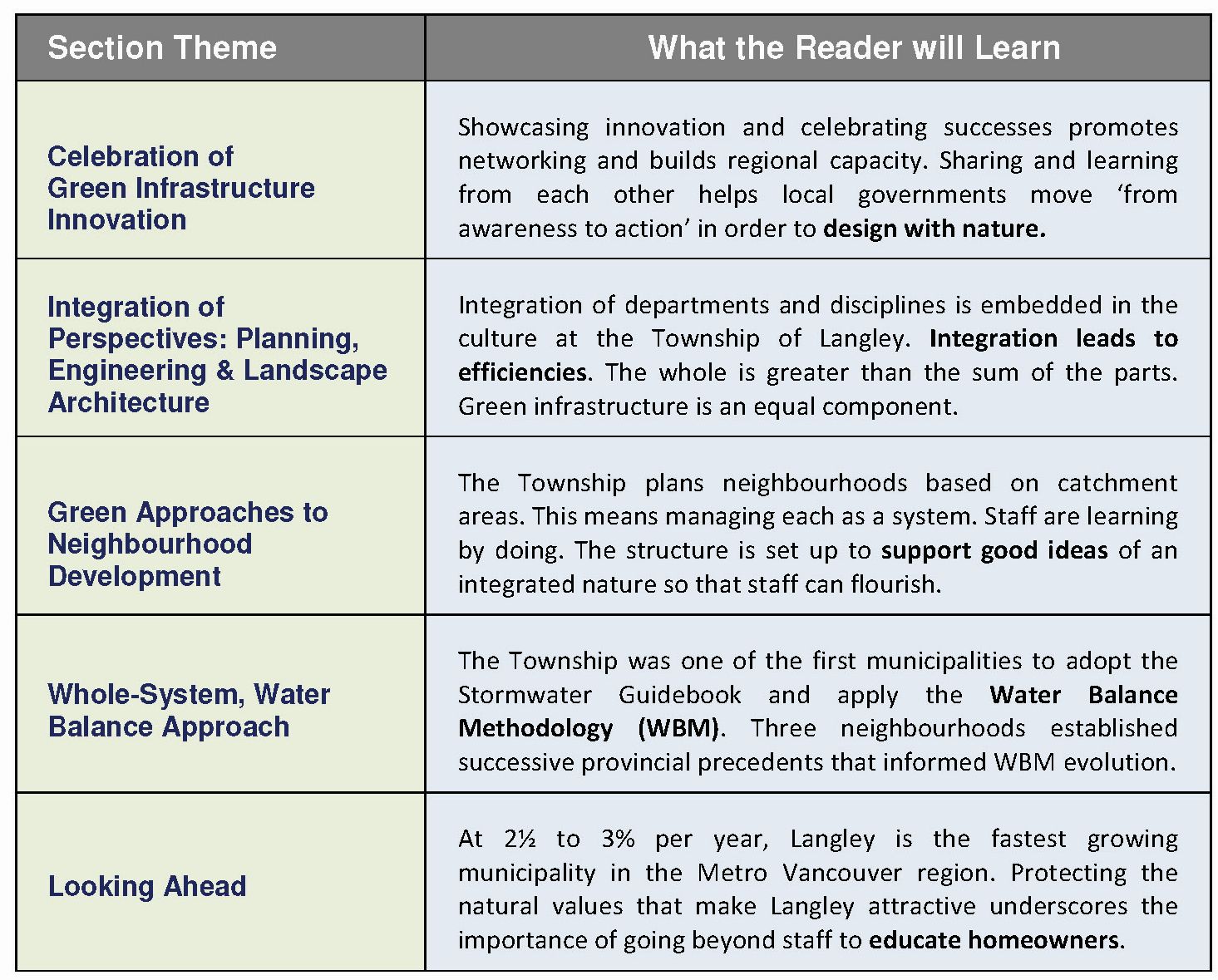