Celebrating Green Infastructure in the Metro Vancouver Region: In 2005, the Green Infrastructure Partnership convened a Consultation Workshop that resulted in the “Showcasing Innovation Series”

Convening for Action in BC
to Change Standards of Practice

“The atmosphere was upbeat with participants enthusiastically stressing that the number of success stories is growing. The clear message was to make outreach and practitioner education the #1 priority. This resulted in a reconfiguration of the GIP Work Plan as a set of ten educational elements (as shown below), and that comprise an Outreach & Continuing Education Program (OCEP),” reported Kim Stephens.

The “Celebrating Green Infrastructure Program” was a consultation outcome. The program created opportunities to network and share “how to do it” experiences on the ground.

The program combined two OCEP items – the Workshop Roadshow and Project Tours – because “Showcasing Innovation” was a workshop followed by field tour.

“The goal of the Showcasing Innovation Series was to build regional capacity through sharing of green infrastructure approaches, experiences and lessons learned as an outcome of ‘designing with nature’. The series was a building block process — each time the objective was to raise the bar when celebrating successes in Greater Vancouver municipalities,” recalls Paul Ham, former Chair (2005-2008) of the Green Infrastructure Partnership.

For background on the 2005 Workshop, click on Green Infrastructure Partnership organizes consultation workshops in Metro Vancouver to launch provincial initiative. 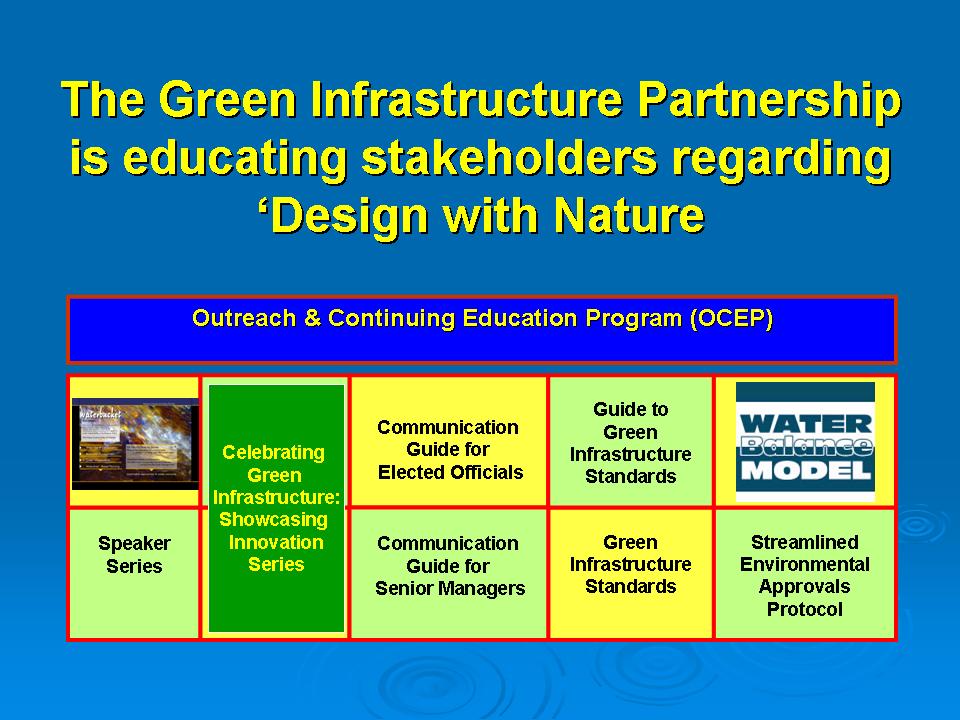