Natural Catastrophes: A Canadian Economic Perspective on a Changing Climate

In April 2014, TD Economics released a report called Natural Catastrophes: A Canadian Economic Perspective. TD  estimates that by 2020 the cost of severe weather incidents to Canadians is expected to be about $5 billion, increasing to between $21 billion and $43 billion by 2050.

A Spike in Natural Catastrophes

One of the consequences of a changing climate is an increase in the severity and frequency of storms and other weather-related events in many parts of North America.

“Any natural force that has major human, economic, or social impacts can be classified as a natural catastrophe. For instance, severe weather becomes ‘catastrophic’ when it displaces people from their homes, causes injuries, deaths, property damage, or economic disruptions,” wrote Craig Alexander, Senior Vice-President and Chief Economist with TD Economics, in a report that he co-authored with Connor McDonald.

“In this special report, we discuss how socioeconomic factors have contributed, at least in part, to the increased incidence of natural catastrophes over the past three decades. We round out our analysis by shedding some light on the financial and economic implications of these catastrophes for Canadians.”

“Population growth and urbanization have increased the density of cities. Relative to the 1980’s, the number of people living in urban settings has increased drastically. Consequently, weather need not be more severe to impact a larger number of people. Moreover, a large portion of major urban cities are located in areas which are prone to certain types of catastrophes.”

“It’s prudent for businesses and policy-makers to start thinking of the long term-implications, and place a larger emphasis on catastrophes when making investment decisions,” concludes Craig Alexander.

To download a copy of the TD Economics report, click on Natural Catastrophes: A Canadian Economic Perspective. Refer to Table 1 for a description of catrastophe types. 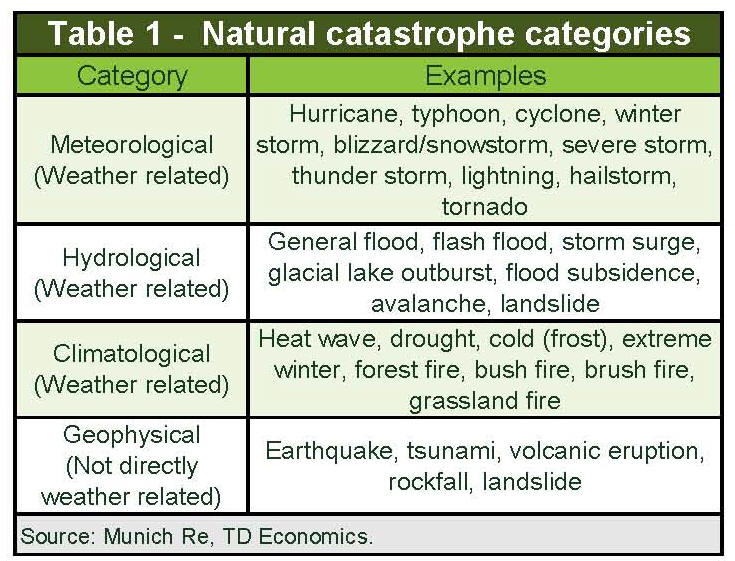