July 31, 2015 - Posted in 2011 thru 2015, Implementation of Green Projects in British Columbia and Beyond, Law and Policy Tools, Uncategorised

In July 2015, the City of Seattle adopted a strategy to guide its work. To download a copy, click on Green Stormwater Infrastructure in Seattle: Implementation Strategy 2015-2020 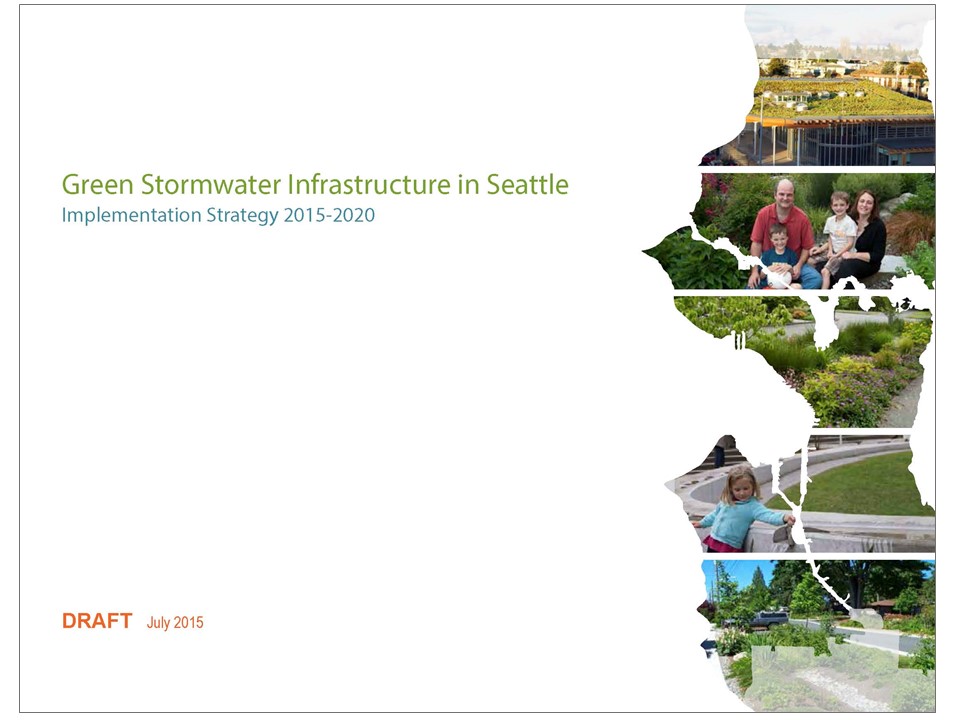 approaches for preventing this type of water pollution.

Rainfall rushing off hard surfaces such as roads and parking lots can overwhelm piped drainage systems and cause backups and combined sewer overflows. The runoff also carries pollution directly into creeks, lakes and other waterways.

Strategy Establishes a Goal for Year 2020

Green Stormwater Infrastructure (GSI) prevents overflows and pollution much like a forest would — by slowing and cleaning the water and either reusing it or allowing it to soak back through the soil. Examples of GSI include roadside bioretention swales and street trees that manage street runoff; rain gardens and cisterns that manage roof runoff; and green roofs and permeable pavement that are self-managing.

“Green stormwater infrastructure is a valuable tool for us, because it helps us prevent stormwater pollution and greens our neighborhoods at the same time,” said Mayor Murray. “This win-win combination is critically important.”

In 2013, Seattle City Council Resolution 31459 challenged Seattle to rely on GSI to manage stormwater runoff wherever possible and set an aggressive target to manage 700 million gallons of stormwater runoff annually with GSI by the year 2025 — a seven-fold increase over the city’s 2012 baseline.

The draft Strategy released today sets an interim goal of managing 400 million gallons of stormwater runoff annually with GSI by the year 2020, summarizes progress to date, outlines a set of strategies and planned investments for accelerating the adoption of GSI in Seattle, and articulates a two-year work plan for City of Seattle departments.

“Whether it’s a homeowner installing a rain garden, or a commercial property with a green roof and rain-absorbing pavement, there are steps we can all take to prevent polluted runoff and give Puget Sound a break,” said King County Executive Dow Constantine.

While natural drainage approaches have been central to our work for nearly fifteen years, this Strategy guides us in redoubling our efforts to accelerate adoption,” said Ray Hoffman, Director of Seattle Public Utilities. “For us, this means building innovative partnerships with sister agencies, community organizations, and project developers, and supporting Seattle residents’ efforts to manage their stormwater on-site.”

To read an article posted in 2013 on the waterbucket.ca website, click on Rainwater Management in Seattle: Mayor’s Executive Order directs a coordinated approach to increased use of natural drainage systems.