FLASHBACK TO 2009: Looking Back, the Future is Now – Yesterday’s Policies and Expectations for Green Communities have been Evolving into Today’s Standards and Practices

December 21, 2014 - Posted in 2011 thru 2015, Implementation of Green Projects in British Columbia and Beyond, Law and Policy Tools, Uncategorised

The following article is an abridged version of a document that was published in September 2009. The seventh in a series, it served as a resource for the 2009 Comox Valley Learning Lunch Seminar Series. The article describes the provincial context that provided a backdrop for the 2009 Series; and summarizes complementary provincial programs led by two ministries, namely:

Mutually supportive, these two programs established clear expectations for local governments going forward. Those expectations are now being realized through implementation of the new Water Sustainability Act, passed in 2014, and the Gas Tax Agreement. To download a PDF copy and read the complete article, click on Today’s Expectations are Tomorrow’s Standards In British Columbia.

“The program goals for Living Water Smart and Green Communities constitute a ‘call to action’ on the part of British Columbians to implement The New Business As Usual,” stated Kim Stephens in 2009 when the article was published. He is the

Executive Director for the Partnership for Water Sustainability in British Columbia.

“The Province has put in place a policy framework that enables local governments to be proactive in doing business differently: This is what we want our communities to look like in 50 years, and this is what we will do starting now to ensure it happens.”

“To help local governments move from awareness to action on the ground, the Province has also provided funding for web-based tools such as the Water Balance Model, Water Bucket Website, Irrigation Scheduling Calculator and Water Conservation Calculator.”

Ministry’s seed funding that brought the vision for the Water Sustainability Action Plan to fruition.

“New thinking about development leads to new benefits. These include more green spaces, more water and fish in the streams, improved community vitality, reduced demand for water, and reduced expenditure on infrastructure.”

“Water issues are complex and best solved collaboratively, which include using strategies and solutions that fall outside government control. While legislative reform is a foundation piece, collaboration takes place outside the legislative framework. At the end of the day, planners and engineers and other disciplines must come together to determine the issues and solutions. No statute will help them do that.”

“This is why we constantly emphasize that Living Water Smart is about motivating and inspiring everyone to embrace shared responsibility. Influencing behaviour and attitudes is at the heart of moving from awareness to action.”

“As an outcome of the 2009 Series, we want to get people thinking about how to make real the 2020 objective of supplying 50% of new water demand by using less. Getting there requires going well beyond the usual indoor water saving measures. It entails accelerating the current momentum for changing what we do on and to the land.”

Opportunities and Strategies for Green Action

In June 2009, West Coast Environmental Law released a discussion paper titled Bill 27: Opportunities and Strategies for Green Action by BC Local Governments. Written by former West Coast Staff Counsel,Susan Rutherford, the paper is designed to provide “…analysis and practical guidance regarding how local governments may use the legal tools available to advance green initiatives.” The focus is Bill 27, new powers extended under it, and how that power may be used to strengthen sustainability efforts.

Under each topic, the paper discusses New Requirements and New Opportunities, as well as Strategies for overcoming challenges and making the best use of the powers for achieving each of the Green Action objectives.

“The paper by Susan Rutherford discusses a variety of legal tools, including development permit area guidelines. This is especially relevant to the 2009 Comox Valley Series because the  development permit tool has been identified as a means to advance the regional team approach,” noted Kim Stephens.

“A mandate of the Ministry of Community & Rural Development is to foster partnerships, collaboration, innovation and integration through the program elements that comprise the Green Communities Initiative,” stated Glen Brown in 2009. Until 2014, Glen Brown was Executive Director of the Local Government Infrastructure and Finance Division of the Ministry. In April 2014, he joined the

Union of BC Municipalities as General Manager, Victoria Operations.

“Ultimately it is the Ministry’s grant programs that provide the incentives that enable the Province to influence local government behaviour; and reward those who meet program objectives for doing business differently on-the-ground.”

“The reality of an increasing local government infrastructure deficit means that there will be even stiffer competition for available funding. As a result, there is a greater incentive for local governments to demonstrate how their innovation and integration will be effective in meeting the goals of both the Green Communities Initiative and Living Water Smart.”

To read the complete article, click on Today’s Expectations are Tomorrow’s Standards In British Columbia to download a PDF version.

To access the complete set of seven resource documents released in 2009, click on 2009 Comox Valley Learning Lunch Seminar Series. Leading up to the first seminar, stories published on the Waterbucket progressively foreshadowed what would be covered in the series. 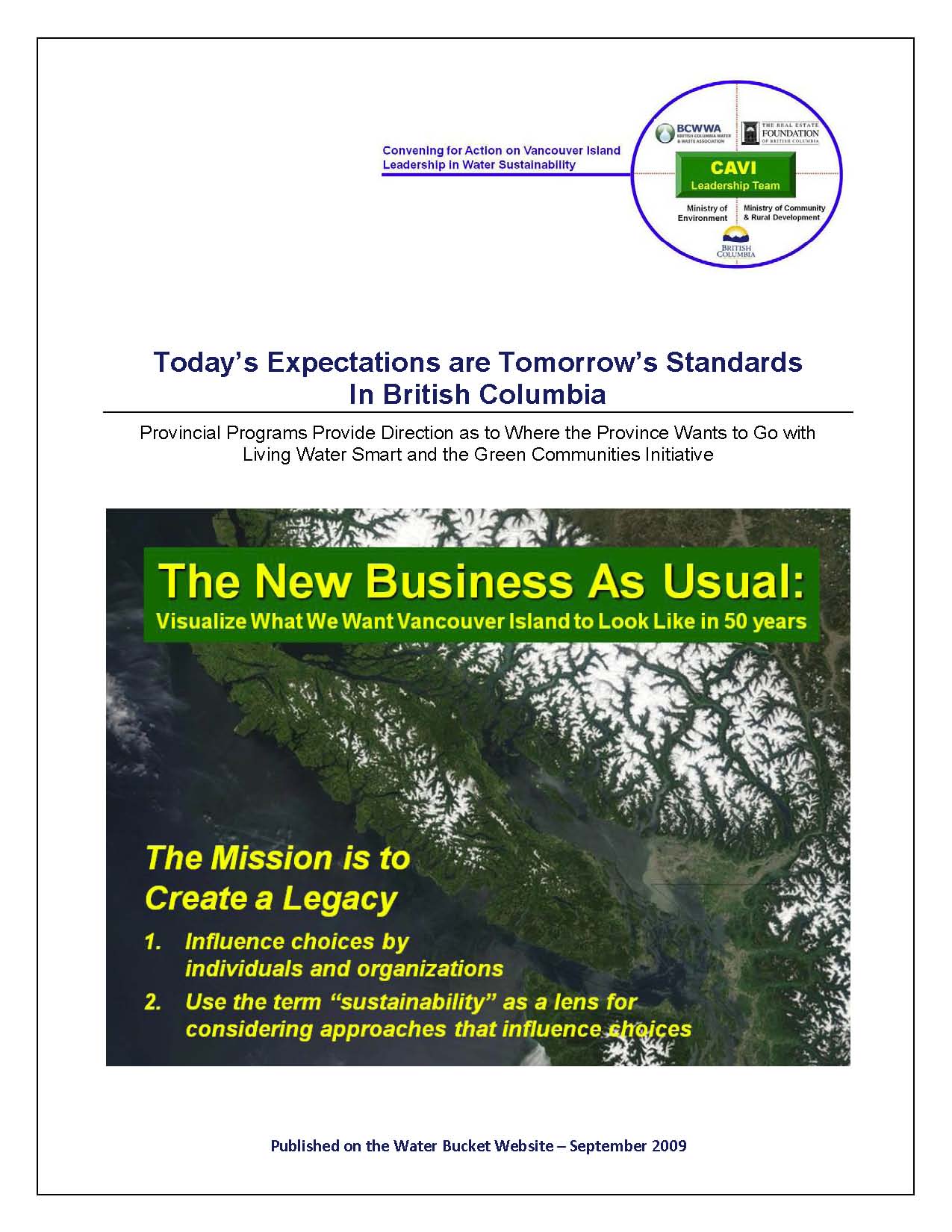