New Report Reveals a Vision for Cities of the Future: Greener, Healthier and More Resilient

‘Cities Alive’ – a new report from Arup in the United Kingdom, envisages cities of the future as integrated networks of intelligent green spaces, designed to improve the health and wellbeing of citizens. This forward-thinking report addresses global issues such as climate change, urban population growth, resource scarcity and risk of urban flooding.

Some of the more innovative elements such as urban farms, glow in the dark trees and solar powered pathways are illustrated in an artist impression, to demonstrate how the futuristic components can integrate into the city’s network.

As space in cities becomes more precious, planning for green needs to be considered as a fundamental consideration and not as an optional add-on or a nod towards biodiversity.

Tom Armour, Landscape Architecture Group Leader at Arup said: “Often green space is employed as an after-thought in urban development, either due to costs, a lack of space, or a lack of understanding of the benefits it can deliver, but its impact on the health and wellbeing of citizens and the carbon footprint of the city warrants far more attention.”

“We should be developing cities to promote biodiversity rather than hamper it, as part of a drive for higher quality external design to create better places for urban citizens to live, work and relax, where people can lead healthier and happier lives. As space in cities becomes more precious, planning for green needs to be considered as a fundamental consideration and not as an optional add-on or a nod towards biodiversity.”

“We need to plan our external environment in a multi-layered way, so we can use our city space more effectively by exploiting and adapting existing spaces.”

The report’s authors want to create healthier more biodiverse urban environments and a connected city ecosystem for people and wildlife that also builds in resilience measures against climate change in the form of storm, flood, heat, drought and pollution protection.

Cities Alive states that we need to make the natural environment a primary concern in urban development, and one that should be considered from the earliest planning stages. By working with nature and through high quality landscape design, Cities Alive proposes an economic way of addressing the challenges of population growth and climate change in our cities, to deliver significant social and environmental benefits.

Founded in 1946 with an initial focus on structural engineering, Arup first came to the world’s attention with the structural design of the Sydney Opera House, followed by its work on the Centre Pompidou in Paris. Arup has since grown into a truly multidisciplinary organisation. Most recently, its work for the 2008 Olympics in Beijing has reaffirmed its reputation for delivering innovative and sustainable designs that reinvent the built environment. 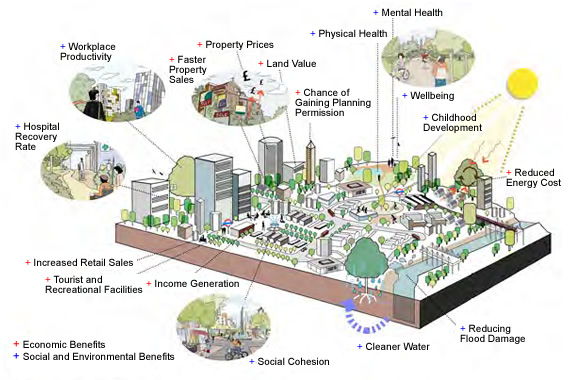