May 20, 2012 - Posted in 'Design With Nature' to Create Liveable Communities, articles for period 2011 thru 2015, Climate Change Adaptation 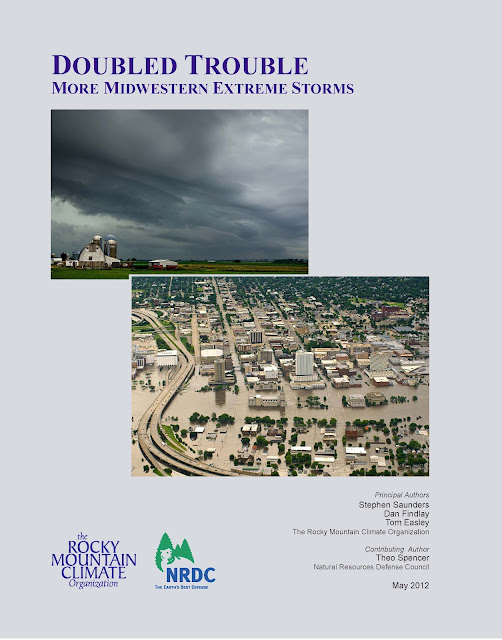 The kind of deluges that in recent years washed out Cedar Rapids, IA, forced the Army Corps of Engineers to intentionally blow up levees to save Cairo, IL, and sent the Missouri River over its banks for hundreds of miles are part of a growing trend, according to a new report released today by the Rocky Mountain Climate Organization (RMCO) and the Natural Resources Defense Council (NRDC). Big storms, leading to big floods, are occurring with increasing frequency in the Midwest, with incidences of the most severe downpours doubling over the last half century, the report finds.

Stephen Saunders, RMCO president and the report’s lead author, said that global studies already show that human-caused climate change is driving more extreme precipitation, and now how great the increase has been in

the Midwest has been documented and the extreme storms have been linked to flooding in the region. “A threshold may already have been crossed, so that major floods in the Midwest perhaps now should no longer be considered purely natural disasters but instead mixed natural/unnatural disasters. And if emissions keep going up, the forecast is for more extreme storms in the region,” Saunders said.

Karen Hobbs, senior policy analyst, NRDC, and a former first deputy commissioner  for the City of Chicago’s Department of the Environment, said:  “Most of our communities were not designed to handle the volume of

water dumped by these epic storms. But green infrastructure solutions, such as green roofs, street trees and rain gardens, literally capture rain where it falls, helping prevent flooding and providing communities with greater resiliency to these ferocious storms.”