Using the Vancouver Region as his case study, Seven Rules for Sustainable Communities: Design Strategies for the Post Carbon World — the new book by Patrick Condon of the University of British Columbia — compares and contrasts the problems and progress of this region with those of other North American urban areas. Of particular new importance is how city form affects the production of planet-warming greenhouse gases.

Patrick Condon explains this relationship in an accessible way, and goes on to show how conforming to seven simple rules for community design could literally do a world of good. Each chapter in the book explains one rule in depth, adding a wealth of research to support each claim. 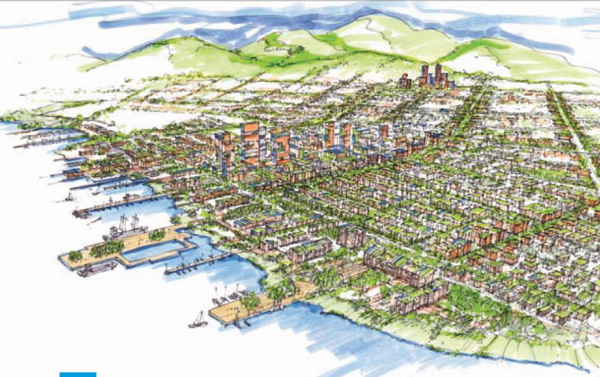 Why Lower Mainland residents can show how to save the planet

“Right now the Lower Mainland of British Columbia leads any other region in both Canada and the United States in reversing the rush to global climate collapse,”

writes Patrick Condon in an article published by The Tyee.

“This is because more people in our region prefer to live in walkable, diverse, jobs rich, dense neighbourhoods, than ever before. And as the distance between people, jobs, recreation, and education shrinks so too does our individual production of greenhouse gases.”

Do all of this for the kids

“It is therefore up to a new generation of citizens, professionals, and elected officials to coalesce around a common vision for the future — a common vision deeply grounded in the pioneering efforts of the previous generation, and in the tangible physical realities of the place where we live.”

“These seven rules, and the ‘Streetcar City’ principle to which they all somehow connect, are my own personal best shot at such a vision. There are many others. Let the debate continue. But let us also start building the sustainable region right away. Let’s start Monday. There is no time to lose.”

The foregoing excerpts are from the last in a series of articles published by The Tyee during the period September-October 2010. The series was built around Patrick Condon’s new book.

Links to each article in the series are found in a set of stories posted on the Water Bucket. To access the set, click here.

To order a copy of the book, click on Seven Rules for Sustainable Communities: Design Strategies for the Post Carbon World.

The Tyee is an independent publication that is found at http://www.thetyee.ca/ It went online in November 2003. According to David Beers, Editor, “We’re dedicated to publishing lively, informative news and views, not dumbed down fluff. We, like the tyee salmon for which we are named, roam free and go where we wish.” Since then, The Tyee has attracted some of the best journalists in B.C. who have broken many important stories.