Turning the Tide in Nanaimo: The story of the Inland Kenworth development as told by Dean Mousseau and Gary Noble 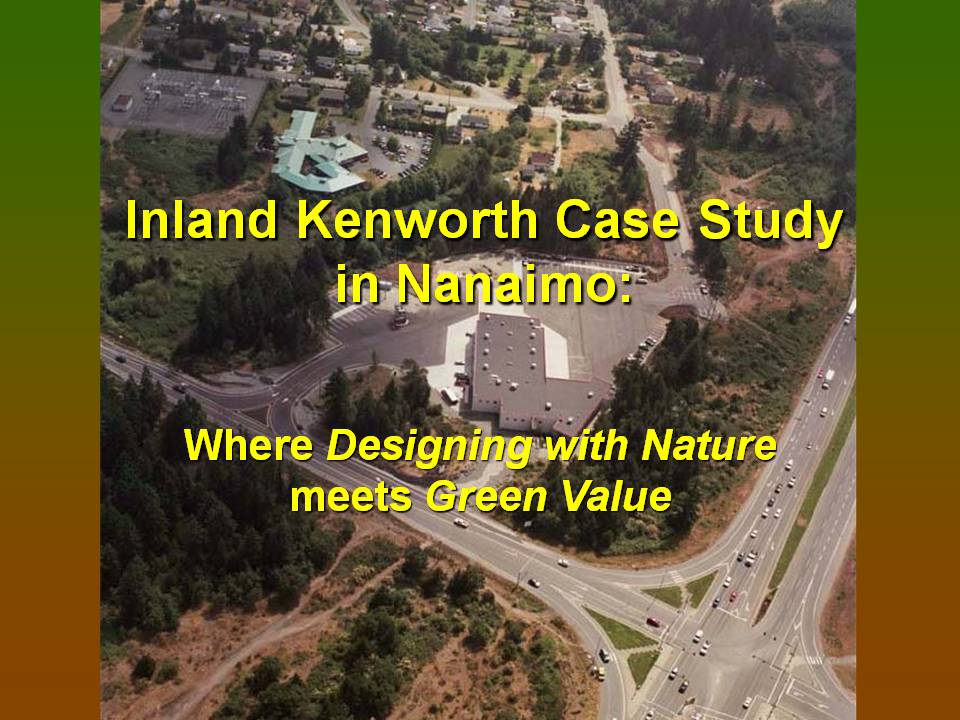 The Inland Kenworth truck and heavy equipment facility in the City of Nanaimo illustrates what can be accomplished through collaboration when a municipality challenges a development proponent to be innovative. Also, the project illustrates how a Design with Nature approach to rainwater management will influence the greening of the built environment and protect stream health.

Inland Kenworth is located at the intersection of the Nanaimo Parkway and Northfield Road, and is close to a residential area. Access to the site had to be compatible with the proposed alignment for a future parkway interchange. The site is immediately adjacent to the Northfield Marsh and is ultimately tributary to the Millstone River.

The Inland Kenworth story was incorporated in the curriculum for the Vancouver Island Learning Lunch Seminar Series because it illustrated how a local government can establish expectations when staff say “this is what we want to achieve”.

The City of Nanaimo’s Dean Mousseau and Gary Noble first told the Inland Kenworth story in September 2007. At that time, the City of Nanaimo and Regional District of Nanaimo co-hosted the first event in the Showcasing Green Infrastructure Innovation on Vancouver Island Series.

Their story resonated because the Inland Kenworth facility is a defining example of what Green Value means on the ground. According to Dean Mousseau, “We view this project as the one that has changed the thinking of the consulting community in Nanaimo, particularly on redevelopment projects.”

In commenting on the changes that haven taken place in Nanaimo as an outcome of establishing the Inland Kenworth precedent, Dean Mousseau provided this perspective : “We are turning the tide because development and redevelopment projects are now incorporating features for rainwater runoff capture.”

At the second seminar in the 2008 Comox Valley Learning Lunch Seminar Series, hosted by the City of Courtenay in October 2008, Dean Mousseau and Gary Noble told their story in a conversational way. The slides that provided the backdrop for their interaction with the audience can be viewed by clicking on Inland Kenworth in Nanaimo: Where Design with Nature meetsGreen Value. 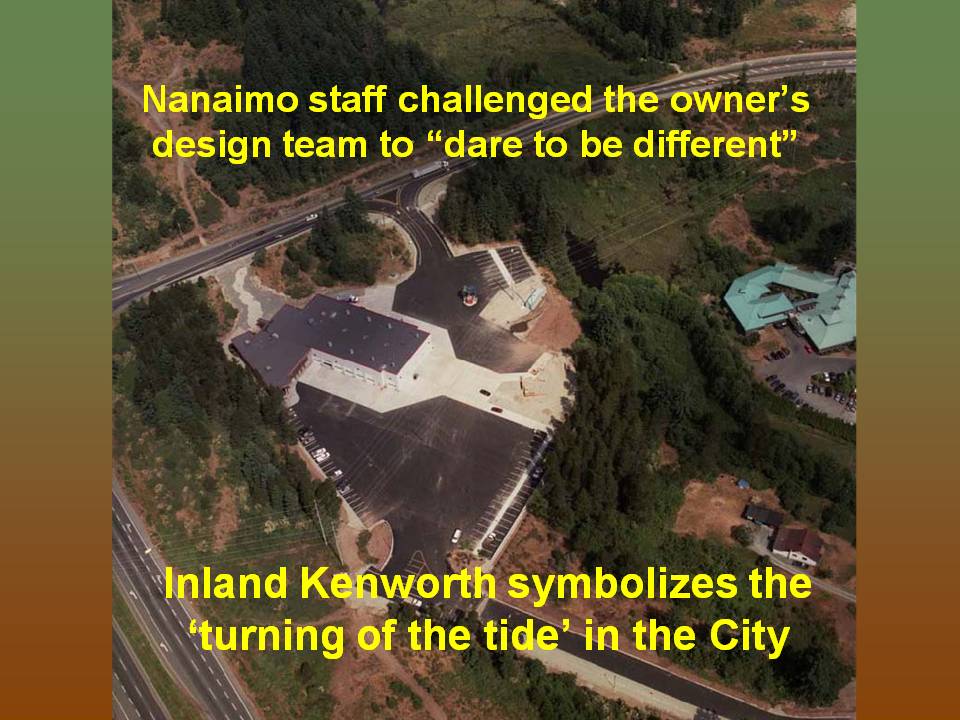 To both provide a record of the day and capture the flavour of presentations at Seminar #2, video clips have been upl”vided into two segments – the first is 9 minutes long and features Gary; the second is 10 minutes and features Dean.

In the opening minutes of the video clip, Kim Stephens (seminar moderator), provided background on why the Inland Kenworth case study is part of the Learning Lunch curriculum. This set the scene for the tag-team presentation by Dean Mousseau and Gary Noble.

In relocating from an intensively urban location to the Northfield site, Inland Kenworth was motivated to position the company as a ‘green’ organization. In this regard, Kim Stephens commented on a story that was published  by an online trucking magazine. “The mileage that Inland Kenworth got from doing things differently has been reflected in their bottomline,” he stated.

“We’re very pleased so far with the increase in business compared to the former location,” said Al Gendron, Nanaimo Branch Manager for Inland Kenworth in the story published by Today’s Trucking Online. “We expect to see even more customers come through our doors, particularly as more people learn about the many new Kenworth products and convenient access.”

Gary Noble started the conversation by commenting on how he and Dean Mousseau represent different perspectives – planning and engineering – and therefore have different expectations that need to be assimilated and integrated. “As a planner, I believe we should start by looking at site constraints and opportunities. And that is where our conversations started with the developer and consultants team.” He then elaborated on how the process energized the design team.

Dean Mousseau described the plan for on-site rainfall capture now that a large portion of the site is covered by pavement and building. “Water stored on the roof spills onto a dry creek bed and flows sub-surface to a marsh,” he stated.

There is no piped drainage system on the site. Rather, drainage from the parking lot flows overland to either the treed buffer or bioswale on the site perimeter. Both Gary and Dean commented on system effectiveness during wet weather. 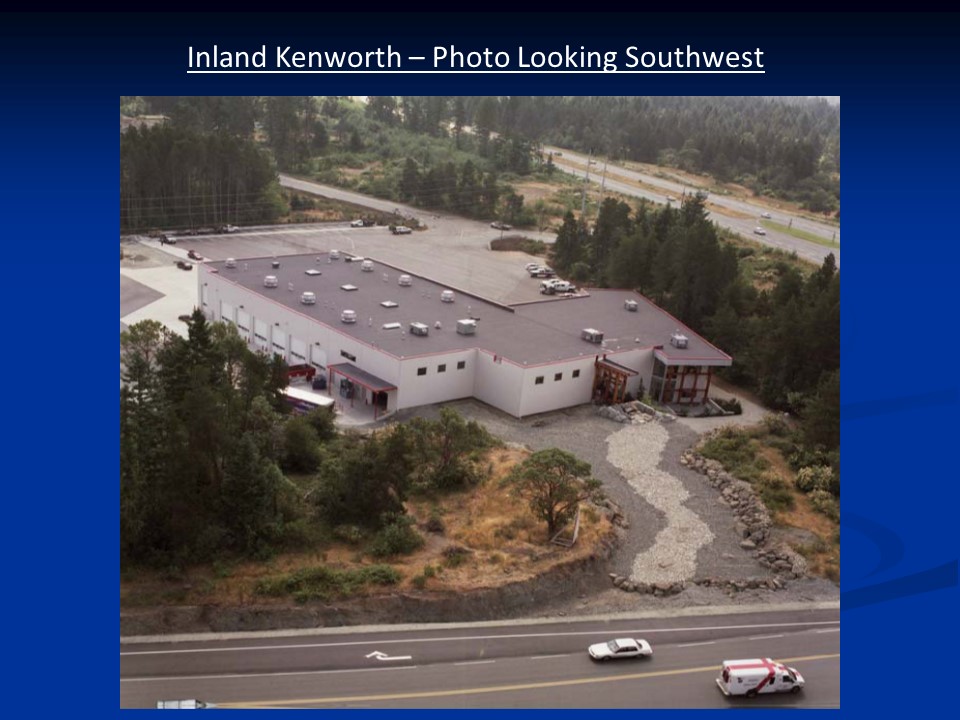 Other Stories posted on waterbucket.ca

To read a complementary set of stories about the Inland Kenworth facility that provide additional descriptions of project features, click on the links below:

About the Learning Lunch Series

The precedent-setting Vancouver Island Learning Lunch Seminar Series was part of the implementation program for  Beyond the Guidebook: The New Business As Usual, This provincial initiative built on the foundation provided by Stormwater Planning: A Guidebook for British Columbia, published in 2002. In 2008, participating Vancouver Island local governments represented some 250,000 people.